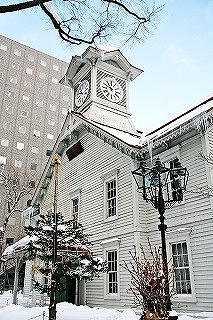 Sapporo, the political, economic, and cultural center of Hokkaido, is a major tourist city which attracts visitors from around the world, with 13 million tourists visiting each year. In the September 2018 Hokkaido Eastern Iburi Earthquake, significant shaking was seen in Sapporo even though it was distant from the earthquake’s epicenter, but important infrastructure was quickly repaired and hotels, tourism facilities, and public transportation returned to business as usual. A large volume of cancellations of reservations by tourists immediately after the earthquake severely damaged the local economy, but with two months having passed since the earthquake the number of tourists is gradually recovering.

The winter is a prime tourism season for Sapporo, with the annual Sapporo White Illumination winter event and the Sapporo Snow Festival, which brings in 2.5 million domestic and overseas visitors. This press tour will cover the appeal of Sapporo, welcoming tourists with just as much energy as usual.

[Sapporo in Winter, Beloved by Tourists]

Of the foreign tourists visiting Sapporo, there has been a noticeable increase of tourists from Asia in particular, especially people entranced by the snow in winter. In order to capitalize on this trend, the City of Sapporo has been working on overseas promotion of winter tourism.

After the September earthquake, 1.149 million people cancelled their hotel reservations in September alone, an impact of 35.6 billion yen on tourism in Hokkaido. Immediately after the earthquake, Mayor Akimoto took the lead in working towards the recovery of tourism, announcing, “Sapporo will continue its efforts in maintaining a safe and comfortable environment to ensure an enjoyable trip for all visitors. As Sapporo rebuilds, we believe welcoming tourists to the city will be its greatest source of strength at this time.” With the winter tourism season approaching, the mayor will visit Beijing and Shenyang (a sister city of Sapporo) in China from November 4, promoting the message to the tourism industry that “tourists can enjoy Sapporo” the same as before the earthquake.

Mayor Akimoto will speak about the state of recovery, future plans, and the appeal of winter tourism in Sapporo. 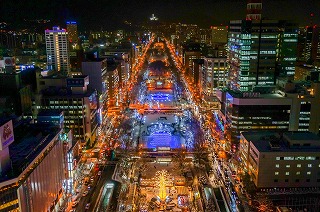 As the first light display event in Japan, Sapporo White Illumination began in 1981 with only 1,048 bulbs. With its unique concept of representing Sapporo’s beautiful snowy scenery using lights, it had a major impact throughout Japan and became a pioneer for similar events throughout the country. It has become a symbol of winter in Sapporo, and visitors are drawn from within Japan and around the world to see the enchanting collaboration between light and snow. This will be the event’s 38th year, and starting from November 22, 800,000 LED lights will turn Sapporo into something out of a fairy tale. 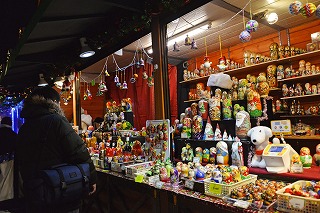 The Munich Christmas Market in Sapporo is another traditional winter event in Sapporo. The event started in 2002, celebrating the 30th anniversary of Sapporo and Munich becoming sister cities, and fills Odori Park and the surrounding area with Christmas cheer. This year, the market will begin on November 22 along with Sapporo White Illumination.

In addition to speaking with a member of the Sapporo White Illumination committee, the tour will be able to see the opening ceremony where all the lights are turned on after a big countdown. The tour will also see the Munich Christmas Market in Sapporo. 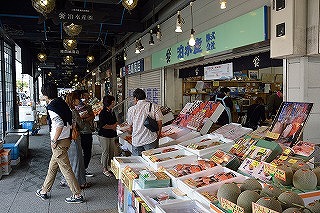 Located in the center of Sapporo, Nijo Market has a long history since the frontier age of Hokkaido when it was the pantry of Sapporo. In addition to stalls with seafood such as crab and scallops, there are stalls with produce including asparagus and potatoes, and there are plenty of tourists who visit the market looking for Hokkaido souvenirs. Meals were provided at the market after the September earthquake, and the market returned to business as usual after the power was restored on September 8.

The tour will hear from a member of the Sapporo Nijo Fish Market Business Co-op which runs Nijo Market about support for tourists, such as when meals were provided after the earthquake, and how tourism has been recovering. 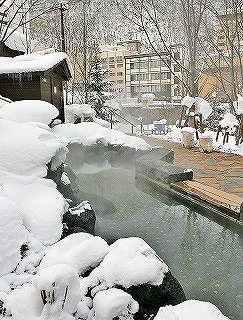 Located about one hour by car from central Sapporo, the Jozankei is one of Hokkaido’s most popular hot springs resorts, with beautiful scenery for each season. Approximately 1.6 million people visit the hot springs each year, with the number of overseas visitors increasing in recent years. In the 2017 fiscal year, over 180,000 foreign tourists stayed overnight in Jozankei, more than double the amount from ten years earlier. After the earthquake, many people cancelled their reservations, but thanks in part to the tourist association running a campaign to give guests a 2000-yen coupon for each night they stay, the number of visitors has begun to recover. The hot springs town was the first in Japan to use the heat of the hot springs to heat the road, installing the system in 1973, and so even during the depths of winter it remains pleasant with no buildup of snow, allowing visitors to walk around enjoying the snowy scenery with foot baths and outdoor baths. 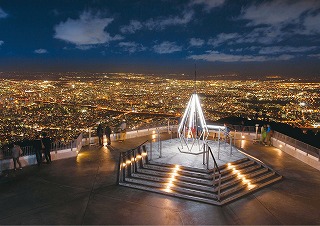 Located almost in the center of Sapporo, the 531-meter high Mt. Moiwa is an excellent spot for night views of Sapporo. A scenic ropeway goes partway up the mountain, and from there passengers can transfer to a mini cable car and enjoy the night scenery spread out below them of Sapporo, a city of two million people. The night view of Sapporo has been described as a “carpet of light” and a “shining jewelry box,” and in 2015 and 2018 in a row was chosen in a vote by 4,500 “night view sommeliers” as one of “New Top 3 Night Views in Japan.” The view is especially breathtaking during clear winter nights.

The tour will go up Mt. Moiwa and see the popular night view of Sapporo. 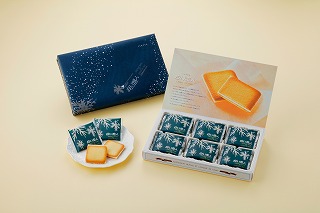 The most popular souvenir from Hokkaido for years, Shiroi Koibito are confectionarries manufactured by Ishiya Co., Ltd. Each day, 1,100,000 of them are made, with annual sales of approximately 13.9 billion yen. Said to be “the Japanese souvenir making the most sales to foreigners,” in 2016 Shiroi Koibito sales records were broken for the fourth year in a row. Shiroi Koibito Park, a theme park by the company’s head office where visitors can experience the appeal of Shiroi Koibito, has over 750,000 visitors per year. The park was ranked Number One in a TripAdvisor ranking of photogenic summer tourist spots according to foreign tourists; more than 200 varieties of roses are in peak bloom at the rose garden in summer, and in winter the park lights up the snowy nights with the Shiroi Koibito Park Illumination event. Only 36 years old, Mr. Hajime Ishimizu is the third-generation president of Ishiya Co., Ltd. Having overcome the risk of bankruptcy ten years ago, the company is pursuing an aggressive strategy and has opened its first outlet store outside Hokkaido, in Ginza, Tokyo.

Mr. Ishimizu will speak about topics such as why foreign tourists choose Shiroi Koibito as a souvenir, future sales strategies, and the renovations to Shiroi Koibito Park currently being carried out. The journalists will also visit a café in the park, which also has Chinese employees. 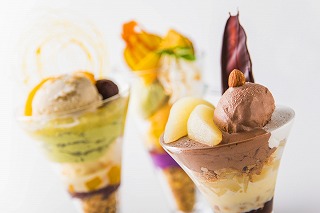 In Japan, people frequently eat ramen as a shime (conclusion) after a night of drinking, but recently the trend in Sapporo has been to finish with a cold parfait instead. This trend has been popularized by Ms. Chiemi Isozaki, an employee of Crypton Future Media, the developers of the world-famous virtual singer Hatsune Miku. According to Ms. Isozaki, since a few years earlier ending the day with a parfait, regardless of the season, had become a growing trend among Sapporo residents. Ms. Isozaki is working at Crypton Future Media on stimulating the local economy. Crypton Future Media and another company created the Sapporo Shime Parfait Promotional Committee in September 2015 for promoting Crypton Future Media’s café. Ms. Isozaki thought of using this underlying trend as a local tourism resource to establish Sapporo shime parfait as a brand and carried out promotional activities. The parfaits, with their colorful ice cream and fruit toppings, became popular for being Instagrammable. There are now over 20 member stores providing shime parfait in Sapporo alone, with the shime parfait culture having become established as a new tourism resource in Sapporo. Recently, the shime parfait trend has also started to spread to Tokyo as well.

Ms. Isozaki will speak about the new food culture of shime parfait, which has begun spreading throughout Japan from its origins in Sapporo. 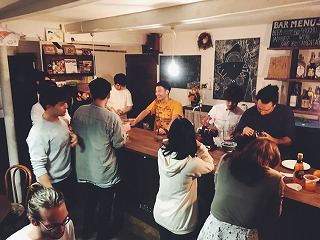 Guest House waya opened in October 2014, started by three youths who moved to Sapporo after graduating from university in Tokyo. The initial funding for the business came from crowdfunding and money they had saved from working while at university. The guesthouse, a renovated 43-year-old traditional Japanese house, became popular with travelers from both Japan and abroad for holding events that include the local community, such as summer festivals and a mochi-pounding competition in the winter. In August 2016, a second guesthouse, yuyu, was opened in the Soseigawa East area, expected to become a major center for tourism in Sapporo moving forward. After the September earthquake, in line with their original concept when they started the guesthouse of “making a place where everyone feels at home,” they opened up the living room to the public for free, and provided the foreign tourists and others with food, bringing peace and comfort to the people affected by the disaster.

The tour will visit Guest House yuyu, and speak with Mr. Takashi Kimura, Co-President of Staylink, the company which runs waya and yuyu, about the story behind opening the guest house, and what happened after the earthquake.

5. Participants: Limited to 10 applicants. (Only one reporter or one photographer from each company, but two participants from each TV team will be acceptable.)

(1) This tour is organized by the City of Sapporo and run by the FPCJ.

(4) Neither the City of Sapporo nor FPCJ will be liable for any inconvenience, trouble or accidents that might occur during the tour.

(6) This press tour is intended to provide opportunities for news coverage. We request that all participants send a copy of the content of their coverage (article, video, or audio in the case of radio) to the City of Sapporo through the FPCJ after their reports are published or aired. When your report is in a language other than English or Japanese, we also ask you provide a summary in English or Japanese. With receiving your application, we assume that you agree to these conditions.