From October 6 to October 11, 2019, Jean-Simon Gagné of Canada’s Le Soleil newspaper visited Japan as part of the 2019–2020 FPCJ Fellowship Program. 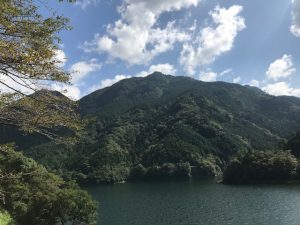 Le Soleil, founded in 1896, is a major French-language newspaper in Quebec, Canada. Mr. Gagné, in Japan for the first time, covered the theme of “issues brought about by a declining birthrate and aging population” by visiting relevant government agencies and nursing care facility, and speaking with experts. In the latter half of his trip, he visited the village of Okawa in Kochi Prefecture, which has the lowest population of Japan if remote islands are excluded.
(Photo: At the Sameura Dam, which has the largest reservoir capacity in Shikoku, on the way to Okawa)

In Okawa, Mr. Gagné interviewed the mayor and other municipal officials, people who had moved there from other prefectures, and the Council of Social Welfare operating a care service for seniors. On his last day there, he also visited the neighboring town of Tosa and covered the issues of depopulation and vacant houses. 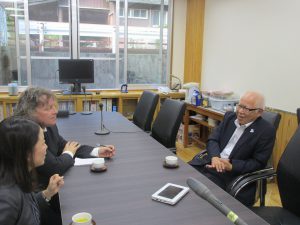 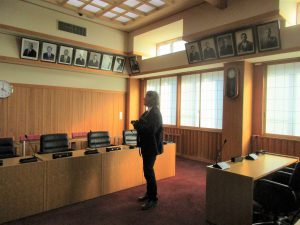 (Left: At Okawa City Hall, speaking with the mayor about the state of municipal assemblies and strategies to revitalize local economies)

(Right: The journalist looking at the village’s Assembly Hall) 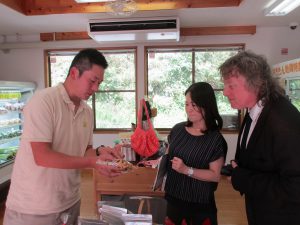 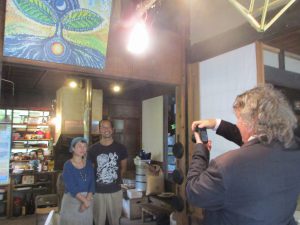 (Left: At the downtown Village Activity Center, speaking with a new member of the municipal assembly elected in April 2019, who relocated from Gunma, about the production and sale of local specialty goods)

(Right: Taking a photo of a couple who renovated a vacant home and run a guesthouse where people can experience rural life)