The program also included a visit to Iwaki City, Fukushima Prefecture, one of the regions affected by the Great East Japan Earthquake. The journalists met with local people and learned of their efforts to recover from the disaster. They also covered Nissan Motor’s electric vehicle and a coral regeneration project to see part of Japan’s efforts to tackle global challenges such as environmental destruction and climate change, which were included in the PALM 6 agenda.
(*This program was hosted by MOFA and organized by Foreign Press Center / Japan.)
＊＊＊＊＊＊＊＊＊＊＊＊＊＊＊＊＊＊＊＊＊＊＊＊＊＊＊＊＊＊＊＊＊＊＊＊＊＊＊＊＊＊＊＊＊＊＊＊＊＊＊＊＊＊＊

1. PALM 6 and the summit-related events 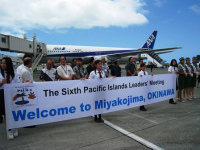 The leaders of the PALM 6 participating countries arrived in Miyako Island, Okinawa, on May 25th. The journalists took photos of the leaders being welcomed by local city officials and junior high school students at the airport. 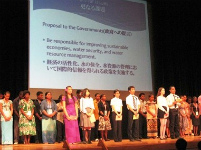 They also attended the "Young PALM" hosted by Okinawa prefectural government (Clickhere for details). In the four-day event, high school students from Japan, Oceania, and the Pacific island countries discussed measures to tackle environmental issues (especially water problems) and presented a proposal to the leaders of their countries. 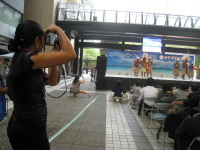 On May 26th, the journalists covered the opening part of the summit meeting held in Nago City, Okinawa, and in the following press conference, the Tongan reporter among the invited journalists, representing the foreign media, put a question to Prime Minister Yoshihiko Noda.

In Tokyo, they had a chance to take photos at an afternoon tea party held in the Imperial Court, where the PALM 6 participating leaders were invited. They also attended aPacific Islands Exhibition & Festa 2012 hosted by the Japan External Trade Organization (JETRO) (Picture on the right).

In Iwaki City, guided by the local NPO Fuyodo2100, the journalists toured coastal areas severely damaged by last year’s massive tsunami and interviewed local people including Iwaki Mayor Takao Watanabe, a member of a local firefighting team, shop owners in a temporary shopping district, and residents in temporary housing. The reporters expressed sympathy for those affected by the disaster and voiced the hope to help them in some way. 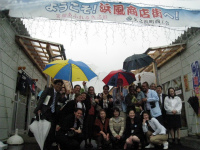 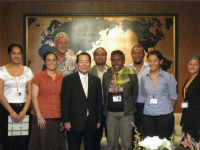 The journalists also visited quake-hit leisure facilities such as Spa Resort Hawaiians and Aquamarine Fukushima. At Spa Resort Hawaiians, they interviewed a member of a hula dancing team called "Hula Girl," which served as a PALM 6 Goodwill Ambassador. In the evening, they had a dinner meeting with a couple of Pacific islanders living in Iwaki City. 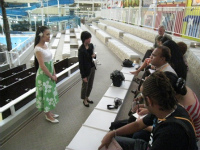 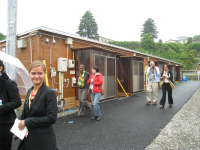 (Interview with a Hula Girl dancer) (Visit to temporary housing) 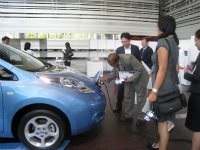 The journalists visited Nissan Motor’s Global Headquarters in Yokohama to cover the company’s electric vehicle, Leaf, which the PALM 6 participating leaders used for travel in Okinawa. They took a trial ride on the new model of Leaf and observed a newly-developed“Leaf to Home” system, which enables electricity stored in Leaf batteries to be distributed to residential homes.
(Picture on the left: Palau journalist charging the battery on a Leaf)

In Onna Village, Okinawa, the journalists covered a coral restoration project called TEAM TYURA SANGO. The project is organized by 11 Japanese enterprises (as of April 2012) and supported by the Okinawa prefectural government, Onna Village Fisheries Cooperative, and others. Showing interest in the project, the reporters asked many questions, as coral bleaching, which is caused by rising water temperatures due to global warming, is a major issue in the Pacific island countries as well. 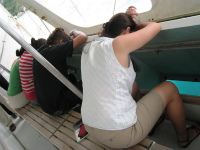 (Picture above: Reporters in a glass-bottomed boat to observe the beds of planted corals. In the project, baby corals are grown at an aqua firm and planted underwater by volunteer divers.)