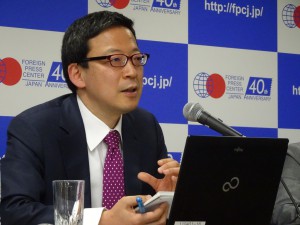 On March 25, the FPCJ invited Mr. Tomo Kinoshita, chief economist at the Financial & Economic Research Center, a research arm of Nomura Securities Co., to talk about the state of the Japanese economy and the results of Abenomics now that it is in its fourth year. The briefing had a total of 31 participants, including 12 journalists from countries such as China, Germany, Italy, Russia, and the USA, and 14 embassy officials from countries including Algeria, Luxembourg, Malaysia, and Thailand.

First, Mr. Kinoshita discussed the “three arrows” of Abenomics. He said the first arrow (aggressive monetary policy) played a significant role in helping Japan escape from deflation as one of the first countries in the world to implement a zero interest-rate policy and quantitative easing. He commented that the third arrow, growth strategy, has had clear effects in areas such as deregulation of the power sector, increasing the number of women in the workforce, and infrastructure exports. However, it will take some time before these efforts will have a noticeable impact on the growth rate. Regarding the new three arrows, Mr. Kinoshita praised how a clear position has been taken on medium-to-long-term issues that will be difficult to solve, with the goals of raising the birthrate to 1.8 and eliminating cases in which people have no choice but to leave their jobs in order to provide nursing care.

Mr. Kinoshita then gave his opinion on the current state of the Japanese economy, saying that the growth rate for the first quarter of 2016 remained around 0% due to extraordinary factors such as the economic slowdown in the USA and falling equity prices, but he expects moderate positive growth for the second quarter, as the economy recovers. He also provided his analysis that private consumption declined due to the weak yen causing increased inflation of food prices, and so as inflation of food prices drops off private consumption should recover. While mentioning the low rate of base salary increase from the collective union negotiations this spring, he mentioned that it was important to observe trends in Japan’s total wages (macro wage), and that over the past year and a half, real macro wages have been rising as fast as they were in the mid-1990s (2.5%), before the Japanese economy entered deflation.

Discussing the future of economic growth in Japan, Mr. Kinoshita presented predictions that if the consumption tax increase is carried out as planned, GDP growth will be 0.9% for fiscal year 2016, and -0.1% for FY 2017. If the consumption tax hike is delayed, GPD growth would be 0.6% for FY 2016, and 0.7% for FY 2017. As an example of the strength of Japan’s economy, he indicated that corporate profits have risen to their highest levels yet, and the reason for this is due to Abenomics, the ageing population, and the low birth rate causing a tightening of the labor market. Mr. Kinoshita explained that the lack of workers encourages an increase in corporations’ selling prices, which leads to increased corporate profits.

To conclude, Mr. Kinoshita commented that since it is unlikely the Bank of Japan will reach their target of 2% inflation, they will have to take more easing measures, which he predicted would occur around July when expected inflation will decrease, but if an economic slowdown is clearly happening measures could be implemented on April 28.

During the Q&A session, journalists asked questions about how likely a delay to the consumption tax hike was; how much he anticipated the supplementary budget to be; what specific additional easing policies the BOJ might introduce next; whether the economy could be rapidly negatively impacted if the value of the yen rose, as the reliance on exports remains high even during the fourth year of Abenomics; and what predictions he had for additional growth strategies to be implemented.