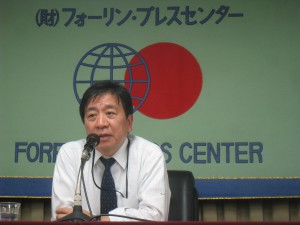 FPCJ has invited Mr. Hiroshi Hoshi, Columnist and Senior Political Writer, Asahi Shimbun, to talk about the Tokyo Gubernatorial Election and its effect on domestic politics. The briefing was attended by a total of 31 people, including 11 journalists from Brazil, China, France, Germany, the Netherlands, the U.S., Russia and Indonesia.

About the election, Mr. Hoshi pointed out that it was virtually a battle of four candidates: Mr. Masuzoe, Mr. Hosokawa, Mr. Utsunomiya and Mr. Tamogami, although 16 candidates were running for it. In overviewing these candidates’ backgrounds and the existence or non-existence of support from political parties, he said that Mr. Hosokawa nominated himself to promote the policy to break with nuclear power generation and to criticize Prime Minister Abe’s conservative policies. Mr. Hoshi also did not forget to mention Prime Minister Koizumi’s powerful support for Mr. Hosokawa. After referring to the major media poll results, Mr. Hoshi said that although Mr. Masuzoe looked to have an advantage, a certain number of voters have not yet decided for whom they would cast a ballot. He also pointed out that some of Mr. Utsunomiya’s supporters, who placed importance on breaking with nuclear power generation, might vote for Mr. Hosokawa. Mr. Hosokawa’s votes, he said, would show voters’ evaluation of the Abe administration.

On post-election national politics, he said, "At present, the Abe administration has an approval rate of about 50%; the highest hurdle is the consumption tax rate hike in April. A pessimistic scenario is that when the approval rate starts to drop, the tax rate is lifted, then business declines, causing a further drop of the approval rate and making the administration weaker. An optimistic scenario is that a 50% approval rate is maintained and that although the consumption tax hike may shrink business temporarily, the economy will be on a recovery trend in the June-July period." "Prime Minister Abe says he puts emphasis on the economic recovery, but, in his heart, he intends to change the interpretation of the Constitution toward approving the use of the right to collective self-defense. Because the New Komeito, the LDP's coalition partner, is wary of changing the constitutional interpretation and revising the Constitution, Mr. Abe may have an option of changing coalition partners to President Watanabe of ‘Your Party’ or Leader Hashimoto of the ‘Japan Restoration Party,’ which share hawkish ideas." Declaring that this requires a high approval rate, Mr. Hoshi predicted that the main point of Japan's politics from spring to autumn will be how the Abe administration will tide over the consumption tax hike and the effects of the ensuing elections of the heads of municipalities.

At the end, Mr. Hoshi referred to diplomacy. Pointing out that Mr. Abe's miscalculation was that the US expressed its "disappointment" over Mr. Abe's visit to the Yasukuni Shrine, Mr. Hoshi said, "President Obama's visit to Japan in April is being scheduled now, but chances are that he may be staying for only a short time in Tokyo. We are watching what requests Mr. Obama will make to Japan for its Asian diplomacy and what talks will be held about TPP."

The Q &A session covered wide ranging questions: how close relations between Japan and the US are, compared with those between the US and China; the ability as Tokyo Governor of Mr. Hosokawa, a senior citizen, and how the results of the Tokyo gubernatorial election will influence Japan-China relations.