Save pets in Fukushima! American woman reaches out to cats and dogs left in evacuation zone (August 24, 2012)

In a corner of Club Lohas, a “dog-run café” in Inawashiro, Fukushima Prefecture, an American woman is running a shelter for cats and dogs affected by last year’s Great East Japan Earthquake. This issue features her efforts to save pets in Fukushima, highlighting the current situation facing animals abandoned in the nuclear evacuation zone. 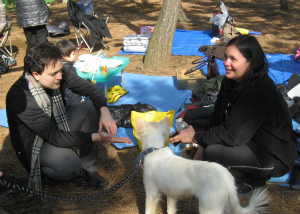 In June 2012, Susan Roberts, the founder of an animal welfare group called Japan Cat Network (JCN), and volunteers visited the Tsushima district of Namie Town, about 25 kilometers northwest of the crippled Fukushima Daiichi Nuclear Power Plant. Their mission was to feed pet animals left behind in the aftermath of the March 11th disaster.

In response to requests from evacuees who had to leave behind their beloved pets, Roberts has regularly visited the government-set nuclear evacuation zone to feed animals. When she finds unclaimed cats and dogs needing help, she brings them back to her shelter in Inawashiro, about 85 kilometers from the stricken nuclear plant, provides care, and looks for foster families or adoptive homes for them.

(Picture: Susan Roberts (right) and her supporters held a charity event in Odaiba, Tokyo, on the first anniversary of the March 11th disaster.)

From Michigan to Hikone, and to Fukushima

Roberts came from Michigan, United States, to Japan in 1993 to teach English in Hikone City, Shiga Prefecture. But countless sickly stray cats, apparently neglected in the country, drove her to change course. She and her husband established JCN and launched a cat population control program called TNR (Trapping stray cats in a humane manner; Neutering or spaying them; and Returning them to where they were found).The program is based on the idea that controlling the cat population in an appropriate manner is effective both in reducing the unnecessary suffering of stray cats and in causing less cat-related annoyance to neighborhoods.

When the massive earthquake and tsunami hit northeastern Japan on March 11, 2011, Roberts took action immediately. On March 22, she arrived in the stricken Tohoku region and provided pet foods and goods at animal shelters and evacuation centers. She had no hesitation in going to Fukushima, where the nuclear meltdown took place.

“I honestly didn’t even think of it,” says Roberts. “Many people had no idea what to do about their pets and had simply let them loose when they left for evacuation centers. We knew that if these pets weren’t helped quickly, many would starve or be hit by cars. I was very focused on helping as many as possible right away, and that’s really all that I could think about.”

Before long, Roberts organized an animal rescue team of volunteers and opened a JCN Inawashiro shelter in Fukushima Prefecture. She was lucky enough to happen to see the owner of Club Lohas, who was willing to offer her place as a pet shelter. 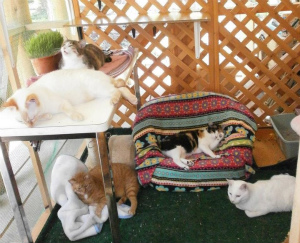 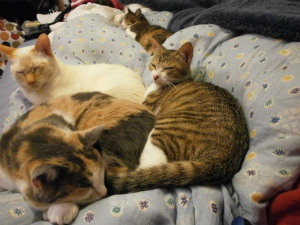 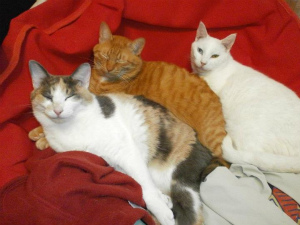 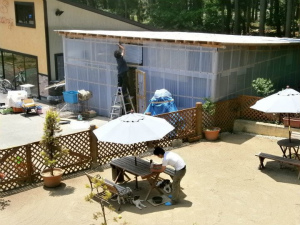 (Picture: Cats waiting for foster families to be found. At JCN’s Inawashiro Shelter, cats are moving around as they like outside of a small cage, after undergoing necessary medical checkups and treatments.)

The Fukushima Daiichi nuclear accident has cast a large shadow over pet rescue efforts in the prefecture. An official of Fukushima Prefecture’s Animal Rescue Headquarters says the limited access to the 20-kilometer no-entry zone around the nuclear plant is a big obstacle in saving animals.Roberts also recalls “very dark days” for her rescue team, which came after April 22, 2011, when the 20-kilometer area was blocked off and all unauthorized entry was prohibited. “We met government officials, requesting entry passes, but all animal welfare groups were denied.”

But three months later, in July, a small number of animal welfare groups including JCN were invited to make rescue trips into the no-entry zone, accompanying an organization of volunteer veterinarians. And in December, just before the freezing winter came, more animal welfare groups were granted permission to go in. On the government level, the Ministry of the Environment and Fukushima Prefecture launched their pet rescue efforts in the 20 km-zone in May 2011. In March this year, just before the spring breeding season came, they organized a series of large-scale rescue operations in cooperation with other local governments. They have trapped a total of 428 dogs and 322 cats as of July, 2012. 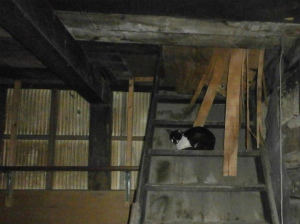 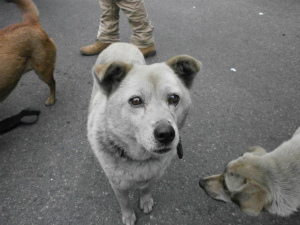 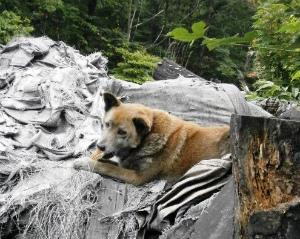 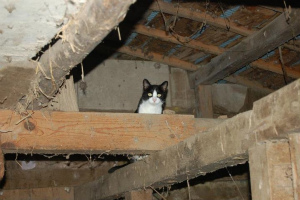 (Cats and dogs in the 30-kilometer evacuation zone. Photo Credit: JCN)
*Note: In the 20-kilometer no-entry zone, it is prohibited to bring in any equipment unnecessary for animal rescue efforts, including cameras.

Fukushima Prefecture’s Animal Rescue Headquarters estimates that there are still hundreds of animals left in the no-entry zone. Cats especially grow in number very quickly, and the rescue headquarters calls for proper cat management including population control.“Some animal welfare groups enter the no-entry zone without permission to feed cats and dogs. This could be acceptable in terms of saving animals. But we have seen a significant increase in the number of cats, and there has been some trouble between them and local municipalities,” an official of the headquarters said.

Roberts proposes the TNR method (Trap, Neuter, and Return) to curb the increasing number of cats. She said that in Tokyo’s Chiyoda Ward, TNR helped reduce the population of hundreds of cats in parks to only a handful.“TNR is the most effective way to control a population of unwanted cats. This is what needs to be started on a wide scale basis as soon as possible in the evacuated areas,” she said.

Roberts also says that scientific research shows that if a large number are removed suddenly from an area, the remaining cats will over-reproduce. If the government waits or tries to remove the animals, it will only make the problem worse, and they will constantly be removing animals for years and years to come,” she warns.

Another big challenge is the long-term operation of pet shelters. In Fukushima, the nuclear accident has hampered animal rescue efforts in many ways, making it necessary to run shelters for a long period of time. Meanwhile, however, the number of volunteers and donations has been on the decrease, according to the prefecture’s animal rescue headquarters. Animal welfare organizations and groups like JCN are looking for long-term assistance including volunteers, donations, and foster families.

Roberts says people have asked why she focuses her efforts on animals rather than the human needs.“Our motto is ‘Helping People, Helping Pets.’ I want to say very clearly that I am helping people with their animals” says Roberts. “People desperately asked us for help finding their pets and thanked me repeatedly with tears in their eyes. This is a very human need---to be able to care for the family pets, and for those pets not to suffer.”