"Night Schools" in the Affected Area Started the New Term: Providing the long-term support for the children who lost places to study because of the March 11

In the areas affected by the Great East Japan Earthquake, NPOs and NGOs have engaged in various activities. More than one year after the disaster, some of these organizations are now trying to find a way to make their support sustainable, observing the progress of local reconstruction. As an example of this, let us introduce the “night schools,” managed by a Tokyo-based NPO, Katariba (meaning “place for sharing” in Japanese), in Onagawa Town, Miyagi Prefecture, and Otsuchi Town, Iwate Prefecture.

Katariba’s “Night School” is an effort to operate an afterschool program to support the affected children in cooperation with the local governments, including the school boards, and volunteers and donors. During the earthquake, many people lost their houses because of the tsunami waves, and moved into temporary housing. Some children faced the degradation of the learning environment. In the temporary houses which were too small and filled with the noise of daily life, it was hard for them to secure the space to concentrate on studying. Looking at this problem, four months after the disaster Katariba opened the Onagawa Kogakukan in Onagawa Town, whose housing collapse ratio was 82.6%, the highest among the affected municipalities. In December, it also opened another school called Otsuchi Ringakusha in Otsuchi Town, devastated by the tsunami waves like Onagawa. The goal was to support the affected children in both educational and psychological aspects, and to foster the future generation that would play key roles in the local reconstruction.

(Photo: A child lying on the ground near the temporary housing to study)

Both schools employed teachers who had taught in the local tutoring schools before the disaster and had lost their jobs because of it. Considering the local circumstance that many streetlights had been knocked down by the tsunami, and it became completely dark after sunset, the schools provided buses to go between themselves, public schools and the temporary housing areas. In the 2011 school year about 230 students learnt at each school. Operating costs and tuition fee were mainly covered by donations from home and abroad.

Last month, after the high school entrance exams and the graduation ceremony, both schools sent out 123 students in total, and as early as March 22 the school in Onagawa started the program for the new term 2012, welcoming even new first-year elementary school children before the entrance ceremony.

*Otsuchi Ringakusha will also be re-opened from the end of May to the beginning of June. 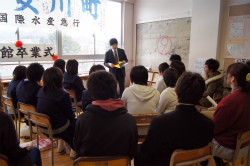 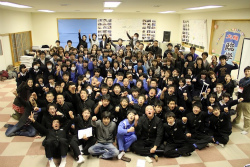 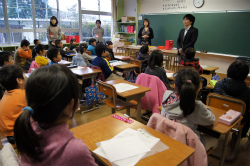 Before the new term started, Katariba made a big decision to start partly charging for the program in Onagawa. To tell the truth, this decision stemmed from the opinions of some parents who said, “We cannot allow ourselves just to depend on others for a long time, because education is what parents should be responsible for.” Katariba also considered how to relate to the devastated areas in the long-term with the thoughts that it would be impossible to continue to collect large amounts of donations and provide charge-free support in the far future, and that it should not reduce the chances of new educational businesses to start up in the local area because of its own charge-free service. As a result, Katariba canceled its plan to continue to provide support at no fee, and decided to charge 3,000-5,000 yen per month on a grade-to-grade basis. It also set up scholarships for the children whose parents find it is difficult to pay the tuition fee.

Upon the start of the second year of the night schools, Ms. Kumi Imamura, Chief Executive Officer and Founder of Katariba, wanted to place importance on creating places and chances for more children and adults. The program was started, seeking to provide a learning opportunity for the affected children to change their grief into their strength. It is now developing into long-term sustainable support, involving a larger number of people.