Shizuoka Prefecture: Obama’s vision that is about to be crushed by the Tea Party may be saved by green tea

Back in 2010, President Obama signed the historic health care reform bill into law after months of grueling debate in Washington. Against the backdrop of unaffordable medical costs and the surge of lifestyle-related diseases, one out of six Americans are uninsured and do not have access to the world’s most advanced medical care available in their own country. The bill, founded on the core principle that all people are entitled to basic security when it comes to their health care, is now facing a major crossroad. The upcoming November presidential election will determine whether this landmark initiative will sink – or continue to swim its course.

The Kakegawa case study will most certainly serve as a model for U.S. health care reform, for there is something healthy about this municipality in Shizuoka, Japan. In addition to the benefits of national health insurance which is offered for all residents of Japan, a study carried out by the Ministry of Health, Labour and Welfare revealed that the Kakegawa citizenry are less overweight, experience the least incidences of cardiovascular and cerebral diseases, and have fewer cancer deaths.

Medical expenditure among the elderly in Kakegawa is also extremely low, largely due to its limited medical resources (1.1 doctors per 1,000 people on average, which is half of Japan’s average and one-third of the US average). Despite this scarcity, Kakegawa ranks top in terms of longevity among its citizenry, with excellent records in clinical indicators. A telling example is Kakegawa’s cancer mortality rate – when applied nationally, Japan’s mortality rate would drop by 20%, cutting health care spending by more than 4 trillion yen per year. Kakegawa has achieved health and longevity with little money spent, experiencing the best of all worlds.

Why so healthy? Scientists and doctors point to the powerful health benefits of green tea. Kakegawa being the top green tea producer in Japan, green tea is widely and frequently consumed among its citizenry. Medical studies are currently underway to determine whether green tea is the sole variable for long and healthy lives. Recent data have shown encouraging indications that green tea consumption is an effective method of preventive medicine.

With only days left until the highly anticipated U.S. Presidential Election, election results will determine the course of U.S. health care reform. Whatever the result may be, there is indeed something to learn from Kakegawa for medically and economically sound health care policies. 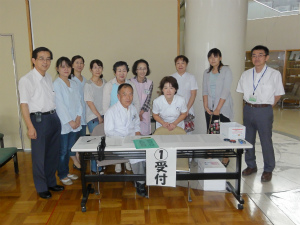 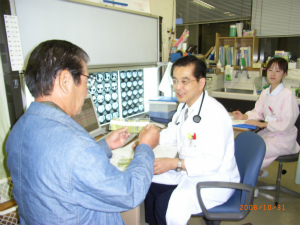 [Photos]: Contributors to the “Kakegawa Study,” a project researching the positive effects of green tea on health (left), Examination by using Green tea