【Report】 FPCJ 40th Anniversary Symposium: Role of the Media in Creating Positive Change and Opportunities for Women in Sports—Towards the 2020 Tokyo Olympics and Paralympics (October 6, 2016) 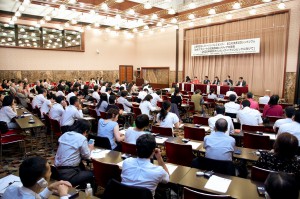 To commemorate the 40th anniversary of its founding, the FPCJ held a symposium based on the theme “Role of the Media in Creating Positive Change and Opportunities for Women in Sports—Towards the 2020 Tokyo Olympics and Paralympics.”

(Funded by The Japan Foundation Center for Global Partnership, sponsored by Yomiuri Shimbun, and with cooperation from the International Center for Journalists)

With encouraging the participation of women becoming a major theme for Japanese society as a whole, there are hopes for female athletes to play an even bigger role in the world of Japanese sports as the 2020 Tokyo Olympics and Paralympics approach. However, compared to other nations such as the US, support in Japan for female athletes to reach their potential is not yet sufficient. In light of these circumstances, this symposium discussed what role the media could play. 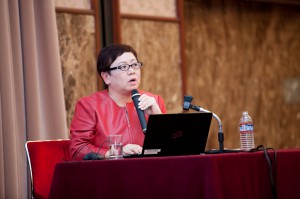 The opening keynote speech was by Dr.  Etsuko Ogasawara, Executive Director of the Japanese Center for Research on Women in Sports (Juntendo University). Her speech, “Creating Opportunities for Women as 2020 Approaches: Issues for Japan to Approach,” included relevant data as she discussed three categories of issues facing women in sports: physical and physiological issues, mental and social issues, and organizational and environmental issues. 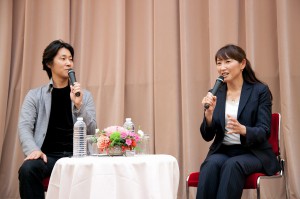 During the following talk session, former professional tennis player Ms. Ai Sugiyama gave a talk titled “Living as a Female Athlete,” in which she spoke about difficulties she faced when playing professionally, graduate school research, and plans for the future. She commented, “It is important to maintain a perspective that questions the current societal conditions surrounding female athletes.” (Navigator: Mr. Shugo Yanaka)

The panel discussion was moderated by Ms. Wakako Yuki, Senior Writer at the Yomiuri Shimbun Tokyo Head Office, with the panel composed of Dr. Ogasawara, Ms. Sugiyama, Arukas Queen Kumagaya General Manager Mr. Masami Horikoshi, The New York Times (US) Contributing Reporter Mr. Seth Berkman, and Economic Daily News (China) Tokyo Bureau Chief Mr. Su Haihe. The panel’s topic was “Developing Support for Women in Sports: What Role Can the Media Play,” and there was a lively discussion of the influence of, and problems faced by, the media. The panel also fielded questions from the audience, such as on the effective use of SNS. 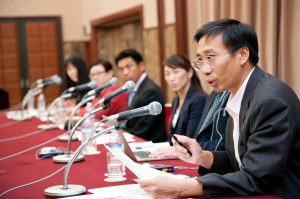 A total of 145 people attended the symposium, from universities, local governments, Japanese media, businesses, and other organizations.

The FPCJ will continue to make a special effort to disseminate information overseas about sports in Japan as we approach the 2020 Tokyo Olympics and Paralympics.

Click here to see the program for the symposium, and panelist profiles.