–Preparing for the 2020 Tokyo Olympics and Paralympics 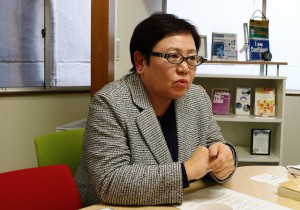 Only four years remain before the Tokyo Olympics and Paralympics in 2020. International society is watching to see what kind of event Japan, as the host country, will be making these Games into. Of the various sports-related issues that exist, one topic that Japan should handle is support for female athletes. Although the Japan women’s national soccer team Nadeshiko Japan receives a lot of coverage, support for female athletes in Japan is lagging behind the USA and other developed nations. Female athletes often need to work a second job in order to make ends meet, and marriage and childbirth become obstacles to continuing to compete. The FPCJ spoke with Dr. Etsuko Ogasawara, Executive Director of the Japanese Center for Research on Women in Sports at Juntendo University established in 2014 (also professor of Sport Management, Graduate School of Health and Sports Science, Juntendo University), about the current situation of support for female athletes in Japan and what issues exist.

Foreign Press Center Japan (FPCJ): Dr. Ogasawara, you are researching issues that female athletes face. There has not been much research done in this field yet in Japan.

Dr. Ogasawara: Until recently in Japan, it was thought that “athletes are athletes,” and whether they were male or female was not important. However, it is necessary to have coaching and support appropriate to the changes women’s bodies go through and the different stages of their life, including marriage, childbirth, and raising children. Since this understanding is not yet widespread, rare talents are being overlooked or not developed properly, and many female athletes are giving up on competing when they get married or have children.

In 2011 and 2012, the Ministry of Education, Culture, Sports, Science and Technology (MEXT) outsourced the “Research on strategic support for female athletes” project to Juntendo University, with members of the Japanese Association for Women in Sport (JWS) forming the core of the project. As part of a study included in this project, we interviewed approximately 30 men and women including current and former athletes, coaches, and members of sports federations, and created a list of three types of issues commonly faced by female athletes and females with athletic potential.

The first type is physical and physiological issues. Bodily changes are one factor driving women away from sports, with data indicating that the number of female students passionately engaged in sports halves from about 40% to 20% when they enter high school. The second type is psychological and social issues. These include sexual harassment and power harassment, and the lack of understanding towards marriage, childbirth, and raising children for female athletes. There are frequently cases of violent coaching methods used in school club activities, including corporal punishment, and even at the national level there was the case of female judo athletes exposing power harassment and violence by a coach. The third type is organizational and environmental issues. Sports in Japan are male-dominated, and even if women have positions in an organization they are not expected to contribute, so things are still decided from a purely male perspective.

Dr. Ogasawara: Exactly. There was no concept of looking at the life of a female athlete with a long-term vision including marriage, childbirth, and a second career. Female athletes who have practiced in the same way as males from a young age may sometimes seem promising. However, they will often suffer from stress fractures or other injuries, and retire from competition without making an impact. This is an unfortunate loss not only for those athletes, but for Japanese sports as a whole.

In order to ensure the best performance possible, it is necessary to provide all-around support for female athletes since a young age when they first become interested in becoming an athlete; through the time they are training; for marriage, childbirth, and raising children; and then for second careers after retiring from sports. The methods are different from the support provided to male athletes, but there was not much interest in the past.

FPCJ: What countries should Japan use as a model when it comes to support for female athletes?

Dr. Ogasawara: The USA and Canada have done a lot. Canada has been systematically working on the issue for some time. The Canadian Association for the Advancement of Women and Sport and Physical Activity (CAAWS) is an NPO that has made a difference in various sports in cooperation with the national government and with the Coaching Association of Canada, which aims to improve coaching in sports at all levels.

In the USA, universities and colleges tend to be involved more than the national government, with the National Collegiate Athletic Association (NCAA) that organizes events between sports clubs of different institutions providing support for training female athletes and coaches. There is also an NPO called the Women’s Sports Foundation (WSF), which makes policy recommendations.

In advanced countries such as these, it is standard to provide support for female athletes until they reach their physical and mental peak. Actually, women have increased levels of calcium after childbirth, making their bones stronger, so as athletes they reach a second peak. Knowing this, marriage and childbirth by female athletes are encouraged. Since knowledge such as this is not widespread in Japan, instead people question female athletes who want to compete after having children.

Recently, there have finally been changes in Japan as well. People who had no interest in learning from the examples of more developed countries have now started realizing this is an issue Japan should tackle before the 2020 Tokyo Olympics and Paralympics. Now is an opportunity for change.

Start by Looking at International Standards

FPCJ: What do you think must be done in order to improve the current situation by 2020?

Dr. Ogasawara: First, it is important for Japanese athletes, coaches, and others working in sports to understand the values, knowledge, and frameworks of countries which are ahead of Japan when it comes to women in sports, such as Canada and the USA. However, many Japanese people have difficulty understanding English, so there is a language barrier when it comes to acquiring the latest information.

The organizational culture that has viewed sports from a male perspective also needs to change. For example, a member of the Japan national women’s soccer team mentioned not always having change rooms available, but she never thought it strange and was fine with it as long as she could play soccer. But, thinking of it from a female perspective, that is actually a strange situation.

FPCJ: What activities are you engaged in yourself? 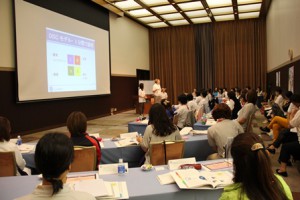 Dr. Ogasawara: In order to change the current situation, I believe the existence of leaders is a major factor. From a desire to help develop more allies in increasing understanding of female athletes, in September 2015 we held a three-day lecture program at Karuizawa called the Women Coaches Academy 2015 (photo right). There were 32 attendees, including former professional tennis player Ai Sugiyama, and former Olympic judo gold medalist Maki Tsukada. Ms. Sugiyama was breastfeeding her child, and her husband provided support so she could participate.

The program included many other lecturers in addition to me, such as Japanese Olympic Committee Executive Board member Kaori Yamaguchi, and lectures covered topics including physical and mental conditioning methods for female athletes, work-life balance, and self-analysis of whether someone would make a good coach. Many of the participants said they were led to new realizations they wished they had known earlier, but there had not been a place to learn about these topics before.

We plan to continue holding this event in the future, and we would like to develop a cycle where participants who came to listen to lectures then present their own lectures on similar topics. Through these activities, I hope a movement will arise where people find issues facing female athletes and then work to solve those issues. 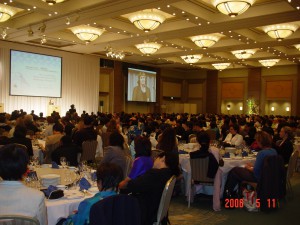 I am also the Regional Representative for Asia in the International Working Group on Women and Sport (IWG), a group of women involved in sports policy from countries around the world. The 2006 IWG World Conference on Women and Sport was held in Kumamoto  (photo left). The next conference will be held in Botswana, Africa in 2018. I believe it will be a good opportunity to draw attention to female athletes. Although it may not be possible to change Japanese sports right away, I will keep working on it in preparation for 2020.

FPCJ: You are clearly very passionate about women in sports. Thank you for your time today.

※Photos of the Women Coaches Academy 2015 and the 2006 IWG World Conference on Women and Sport  are provided courtesy of the Japanese Center for Research on Women in Sports at Juntendo University.

<Profile> Executive Director of the Japanese Center for Research on Women in Sports at Juntendo University since August 2014. Professor of Sport Management at the Graduate School of Health and Sport Science, Juntendo University. After working as a swimming coach at Chukyo University and the National Institute of Fitness and Sports in Kanoya, she received her PhD in sports management from The Ohio State University in 1997. At the 2006 IWG World Conference on Women and Sport in Kumamoto, she acted as Co-Chair of the International Working Group on Women and Sport (IWG). She has also acted as a member of the Women in Sport Commission for the Olympic Council of Asia (OCA) and the Japanese Olympic Committee (JOC).