Japan Strengthens Preparedness for Disaster after 3/11 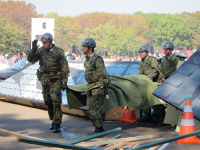 On October 29, the Tokyo Metropolitan Government (TMG) conducted comprehensive disaster management drills with Koganei Park as the main venue on the assumption that the capital was the epicenter of an earthquake. Officials of TMG, the local municipalities, the Self Defense Forces, police and fire departments, and other related organizations, as well as many citizens, took part in the drills. TMG’s disaster drills have been carried out every year around the National Disaster Prevention Day of September 1, but this year’s drills were put off as many officials of the organizations concerned had been dispatched to disaster areas of the Great East Japan Earthquake, in one team after another. 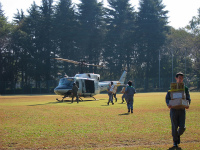 The drills were conducted on the assumption that about 8 a.m. an epicentral earthquake with an intensity of a weak 6 or over on the Japanese scale hit Tokyo. Taking into account the lessons from the 3/11 earthquake and tsunami, details such as planned damage situations and drill procedures had not been given to the participants because this time “blind-type” drills were introduced for the first time. Unlike previous drills in which scenarios and role allotments were known beforehand, this time participants were required to cope with the situation on the spot, which made the drills more strained and practical. 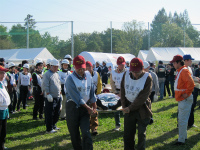 In a blind-type rescue drill whose participants included police officers, firefighters, and members of the Self Defense Forces and the Tokyo DMAT (disaster medical assistance team), a situation was created in which many residents were trapped under collapsed houses. Although it was not decided beforehand who would remove the wreckage houses or search for the injured and the rescuers didn’t know how many people were injured, the rescuers confirmed their roles on the spot and carried out their rescue work helping each other.

A drill for transporting relief supplies was also blind-type. While heaps of relief goods were being brought in by s U.S. military helicopter or Self Defense Force trucks, municipal officers and volunteer citizens in charge of sorting were requested to handle these goods, responding on the spot to requests for goods from evacuee centers or to information on severed roads coming in by the minute. 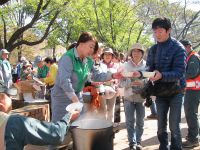 Another drill was held to enhance local disaster prevention; about 2,000 citizens took part in this drill to rescue the imaginary injured from under collapsed houses by themselves. The citizens used jacks to help their neighbors out and carried them on makeshift blanket stretchers. According to a website article of the Mainichi Shimbun of October 29, a participant salaried worker, 43, said, “I have learned for the first time how difficult it is to rescue people and how important it is to help each other with neighbors we do not usually meet.”

Improving Measures for those with Difficulty in Returning Home

It is also an important challenge to prevent people from trying to return home when it seems all but impossible, as such efforts could lead to secondary disaster. According to the Mitsubishi Research Institute, Inc., when the Great East Japan Earthquake occurred, about 14 million people were relatively far away from their homes (out of the wards, towns, villages, etc. where they lived) in Tokyo and three other neighboring prefectures. As the mass transport system was paralyzed, about six million people were estimated to have returned home on foot or by bicycle on March 11. At peak hours, the car lanes of arterial roads were packed with pedestrians hurrying home.

In Minato ward in the center of Tokyo, office workers and others rushed to evacuee centers meant only for the ward’s residents, creating more confusion. In October this year, Minato ward put into effect, for the first time in Japan, an ordinance that requires companies or shops in the ward to prevent their employees from all going back home at the same time, to accept those who cannot return home, and build stockpiles of provisions, in order to cope with those who cannot return home at a time of a large-scale disaster.

The media reported that East Japan Railway Company, which operates in the Metropolitan area, decided to prepare potable water and emergency kits for about 20,000 people in major terminal stations in the Metropolitan area as early as within FY2011 and to open part of the stations up to people at a time of disaster, reflecting the fact that when the Great East Japan Earthquake occurred, the closing of the stations caused masses of people all around them who were unable to go back home.

Other efforts are being made; some preschools, for example, have started Twitter services to let parents know their children’s situation, reflecting the fact that at the time of 3/11 people could not get safety information on their family members because neither fixed-line phones nor cellphones were working very well, with the result that they tried to get home one way or another.

A September 1 website article of the Sankei Shimbun reported as follows: AEON Co., Ltd., a major supermarket, set up a special section on August 10 in each store, two weeks earlier than in usual years, and increased the number of items to about 280, twice as large as usual. As a result, the company’s sales in that section recorded about eight times larger than the same period last year. A kit of emergency supplies, in particular, sold very well. Bic Camera Inc., an electronic retail giant, sold twice as many disaster radios and rechargers of cellphones as in the same period last year at the special section.

In August this year, Meiji Yasuda Life Insurance Co. conducted an Internet questionnaire survey on 1,097 men and women aged between 20 and 59. The survey revealed that the respondents spent an average of 9,606 yen on disaster supplies, an increase of 2,300 from last year and that the ratio of those who mentioned preparation of disaster goods as their concrete means against disaster in their households hit the highest point of 44.8%, a large increase of 10.9 percentage points from last year.