Kawasaki City: Innovation Center of NanoMedicine (iCONM) opened in “KING SKYFRONT”, a base for innovation to develop dream medical technology for the future

Internationalization of Tokyo International Airport (Haneda Airport) is proceeding to make it a hub airport.  On the opposite shore of the Airport (Tonomachi district of Kawasaki City), development is advancing to create “KING SKYFRONT”, a base for open innovation in the fields of life sciences and the environment.  It is an “area to develop dream medical technology for the future”, where research and development is conducted for treatments of Alzheimer’s disease, intractable cancer, and spinal cord injury, as well as medical devices such as leading edge medical robots.

On May 18, 2015, the Cabinet Office held the Council for Strengthening Collaboration between the Haneda Airport Neighboring Area and the Keihin Coastal Area, and decided measures to strengthen collaboration between the two areas as part of the project to achieve the objectives of the National Strategic Special Zone, with a view to enhancing the international competitiveness of Japan.  Specifically, the national and local agencies concerned will cooperate in advancing the alliance between health and engineering industries, promoting international research, exchange and trades, as well as development of required urban and transport infrastructure.  The plan to develop a new bridge (two-track) in the central part of the former site of Haneda Airport and Tonomachi “KING SKYFRONT”, connecting the two areas, was also included in the measures. 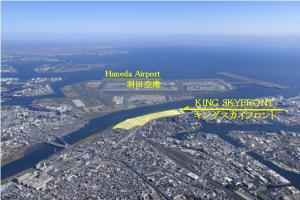 In April 2015, Innovation Center of NanoMedicine (iCONM) was opened as the third core facility of KING SKYFRONT.

iCONM is a facility for government, industry and academia to gather together under a single roof and to promote research and development of nano-medicine technology.  As the core facility of the Keihin Health Industrial Complex, iCONM has a vision to become the most innovative base in the world that will continually disseminate medical technologies, bringing pride to citizens and making dreams come true.

In iCONM, led by nano-medicine authority Prof. Kazunori Kataoka of the University of Tokyo, the research project COINS is being conducted with the participation of several universities and enterprises.  The project aims to develop innovative medical technologies such as “smart nanomachines”, nanometer-size (one billionth meter) macromolecules.

The objective of COINS is to create a society where people will be free from concern over diseases.  Its concept is a “hospital inside the body”.  Prof. Kataoka is considering developing a system in the future that will enable an object/a molecule to patrol inside the body, continually oversee it, make a diagnosis in advance, and autonomously treat a disease.  The technology to be used for realizing this system is nano technology.

For realization of a hospital inside the body, virus-size nanomachines are necessary, which will oversee health conditions inside the body and go into all parts of the body to make a diagnosis and treatment.  Various functions will be incorporated in the nanomachines, such as functions to detect some signs, and to release or work chemicals necessary for treatment.  The technology base has been already established, and practical use of nanomachines is being pursued for diagnosis and treatment of diseases.

One of the examples of research is “reduction of the mortality rates of intractable cancers”, of which treatment is difficult with the existing methods.  This research aims to directly deliver anticancer drugs to cancer cells through nanomachines loaded with the drugs.  Also, as micro nanomachines are able to pass through body tissues, which is impossible otherwise, positive effects for cranial nerve diseases, such as Alzheimer’s disease, can be expected.

Utilizing the favorable location of KING SKYFRONT, on just the opposite shore of Haneda Airport, iCONM will accelerate its efforts for realization of a hospital in the body through the internationalization of technologies and human resources. 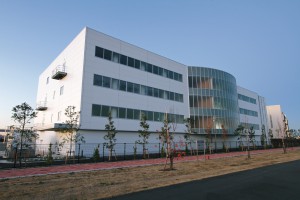 “Kawasaki City: KING Skyfront – the Base for Japanese Innovation” (January 30, 2014)

“KING SKYFRONT”, a Base for Open Innovation is Being Developed near Haneda Airport (Kawasaki City) (February 24, 2015)