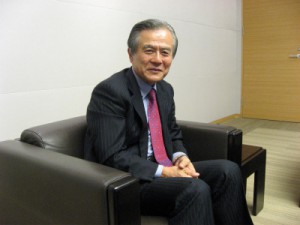 In the third part of our interview with Mitsubishi Research Institute, Inc. Chairman Hiroshi Komiyama, we asked him about government approaches to overcoming population decline and vitalizing local economies, and how successes in solving issues should be actively publicized overseas.

Q: There has been a sense of stagnation in Japan for quite some time, but since Primer

Minister Abe took office in December 2012, there appears to be momentum building for reform.

A: I agree. I am watching with interest his efforts to promote female participation and stimulate local economies. I am the founder of a grassroots organization called Platinum Network, which is involved in activities such as a working group for women and vitalizing local industries. That is why I am very hopeful for Prime Minister Abe’s initiatives.

With the decrease in the value of the yen, some companies have regained their vitality, but the real 2nd arrow of Abenomics is achieving primary balance for Japanese finances, and the 3rd arrow is a growth strategy. One key factor in that growth strategy is stimulating local economies. Local industries will be created while solving the issues I’ve mentioned. That is true stimulation of local economies.

Of course, there have been policies for local stimulation in the past, but they consisted of nothing more than throwing money at the problem. Previous policies were nothing more than a waste of taxpayers’ money. I would like to ask politicians, including the elected DPJ members, if they understand what stimulating local economies actually means. So far, politicians have been entirely unsuccessful in stimulating local economies.

Q:  Mr. Shigeru Ishiba, the Minister in charge of Overcoming Population Decline and Vitalizing Local Economy in Japan, is heavily involved as well.

A: I have high hopes for his efforts. Mr. Ishiba is one of the few competent politicians out there. However, there is a limit to how much one person can accomplish. When you attempt to do something, people who are seriously opposed to it will show up. The question is how to make them progress. I believe the answer is grassroots movements. Grassroots movements have slowly begun in agriculture as well. There are now some farmers that don’t rely on agricultural cooperatives. Instead of letting this end as a local topic, it should be spread throughout the country. The national government also has to respond and change the rules. Therefore, it is important that citizens take action. Instead of just watching how Prime Minister Abe’s stimulation of local economies works out, we have to be active participants.

Q: What kind of local grassroots movements are there?

A: There is the “Leaf Business”* of Kamikatsu Town in Tokushima Prefecture, and Ama Town in Okinoshima*, Shimane Prefecture (a municipality with an aging and declining population which has been having more young people move there). The Yanagidani district in Kanoya City, Kagoshima Prefecture is making shochu as a village-wide effort, and bringing in artists. Together with the Platinum Network, Aizuwakamatsu City in Fukushima Prefecture held the Future Leaders Seminar, a unique training program targeting junior high school students. If a few dozen movements like that start, and everyone believes it is possible, Japan will be able to move forward.

This cannot be accomplished with subsidies alone. The forestry industry is a good example of that. The forestry industry receives 200 billion yen of subsidies annually, and has sales of 300 billion yen. If forestry declines, it will lead to forests growing thicker, which will weaken the soil. This could cause landslides. Having large-scale forestry and agriculture take place across the country should strengthen Japan’s soil.

Large-scale forestry requires mechanization and IT. If the exchange rate with the US dollar gets to 110 yen or more, it will also make the forestry industry internationally competitive. Due to the high quality of its lumber, Japan could be an exporter. China and South Korea both have high demand and are facing lumber shortages. Without reviving forestry and agriculture, there is no chance of stimulating local economies.

Q: Why do you think that Japan is failing to communicate its good points to the rest of the world?

A: I think it is because the adults aren’t proud of their country. They don’t know about Japan. I go around the world saying “Japan overcame issues of industrial pollution to become the most environmental nation in the world”, and no one denies it. All I hear in Japan is “We should learn from the windmills of Germany, an advanced environmental nation” or “We should look to Sweden, an advanced environmental nation”. Ever since the Meiji era, Japanese people have been focused on learning from other countries. That leads to children losing ambition. We have to break through the “Clouds above the Hill”*, and make our own cloud.

Q: Why aren’t the techniques for Japanese homes, which are appropriate for monsoon-prone areas, spread throughout Asia?

A: First of all, Japanese people aren’t confident in their own technology. So much so that they talk about how great Swedish homes are. Insulation in Sweden and Germany is 20 centimeters thick, and if you used that in an Asian home there is less space available inside. In this region, it’s better to use thin vacuum insulation. It doesn’t cost that much if mass produced. If Japan promoted a project to build houses ideal for monsoon-prone regions of Asia, it should be possible to spread that technology in Asia. With Japan’s experience in solving issues, I find it very frustrating that the country cannot move forward with confidence.

(Note: “Leaf Business” refers to the cultivation and sales of leaves and flowers to be used as garnish, mostly at high-end Japanese restaurants. The business has proven instrumental in revitalizing the town of Kamikatsu, which was grappling with declining population and slumping agricultural and forestry sectors. Elderly people and women are major players in the business.)

(Note: Ama is the sole town on Nakanoshima Island, one of the Okinoshima Islands. The town is applauded as a model community whose administrators, residents and settlers from elsewhere in Japan have joined forces to create new industries and thus more jobs.)

(Note: “Clouds above the Hill” is the title of a novel by the great novelist Ryotaro Shiba (1923­­­­­­­–96), which described Japanese society in the Meiji period (1868-1912) by using the following metaphor: “With the mentality typical of their generation, they walk on looking only forward. If so much as a single wisp of cloud were to light up in the blue sky above the hill they are climbing, they would probably stare only at that as they continue on their way.” The cloud here symbolizes their goal to become a modern state.)­