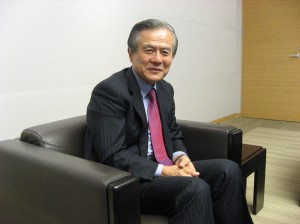 The first of these interviews is with Dr. Hiroshi Komiyama, chairman of Mitsubishi Research Institute, Inc. and former University of Tokyo president, about the state of Japan as a “country with advanced issues”. Dr. Komiyama specializes in chemical systems engineering, global environmental engineering and knowledge structuring. He has also written many books, including Chikyuu Jizoku no Gijutsu [Technology for Sustaining Earth] (Iwanami Shinsho), ‘Kadai Senshinkoku’ Nihon [‘Country with Advanced Issues’ Japan] (Chuokoron-Shinsha) and Nihon ‘Saisouzou’ [Japan ‘Regenesis’] (Toyo Keizai).

A: ‘Country with Advanced Issues’ Japan is the title of a book I wrote in 2007. In the book, I wrote that “Japan is encountering problems that will affect all of humanity before other regions are affected by them”. I believe there are three essential problems facing humanity: limited Earth resources, the explosive expansion of knowledge, and increased longevity. Japan has a lot of people living in limited territory. Despite the lack of resources, many people are benefitting from an advanced civilization. This causes issues.

Japan has experience dealing with industrial pollution in the 1950s-1970s and the energy crises of the 1970s. Individual connections between people are being lost due to the surplus of information, and there are also the issues of increasing longevity and an aging society. These are issues that only occur due to civilization being successful.

Q: What do you think about the rapid shift to an aging society?

A: Amazingly, in 1900 the average life expectancy worldwide was 31 years. As of last year, it was more than 70 years, with first-world nations having average life expectancies of up to 78 years. This is because despite the existence of problems such as poverty and starvation in Africa, overall there is enough food available. With enough food, people live longer. Prince Shotoku lived to the age of 48, and Julius Caesar was said to be 56 years old when he was assassinated. In the past, only a fraction of people had enough to eat, but with the success of civilization there is enough food for everyone and we’ve become longer lived.

A: Japan has a limited territory, a large population and few resources. I believe the entire planet will end up in this situation eventually. The population will continue to rise, and resources will decrease. The offshore pre-salt oil fields being developed in Brazil are 7000 meters underwater. Despite resources becoming depleted, as demonstrated by this kind of undersea development, people around the world have begun to benefit from advanced civilization.

My assertion is that Japan has encountered various problems first, but has also been solving them.

Q: How about the “knowledge explosion”?

A: I first felt the effects of the knowledge explosion when I was a PhD student, over 40 years ago. The lab I was a member of divided up papers among the students to read, but there were more and more academic journals that the other students and I couldn’t manage to read in their entirety.

Now, specialists have to narrow their field to be able to read all the relevant papers. Division of labor is also becoming difficult if the big picture isn’t shared. This is why structuring knowledge is necessary. Specialists have to let people outside their field know what that specialized field is based on. Overall, it seems like the only option is to promote discussion while paying attention to where different fields overlap with each other.

Q: Are there any countries where knowledge structuring is working well?

A: I doubt it. However, the West does have a culture of discussion. For example, even at universities like MIT they teach starting from the basics, assuming the students know nothing. This leads to discussion, and sharing of the big picture. Japan is missing that.

Read more about Japanese achievements in solving issues and future developments in the second part of the interview….