We spoke with Ms. Mariko Nagai, a top interpreter who has worked at G7 summits and various international conferences and symposiums, about how to communicate with people. 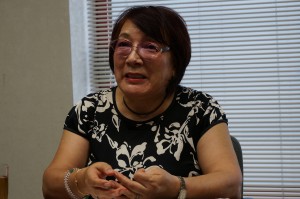 –Is interpreting a difficult job?

I like interpreting, so it has never seemed that difficult to me. There are a lot of stressful factors with conference interpreting, such as a comment becoming controversial, the need to study every day, and the severity of the schedule. But doing something I enjoy probably helps reduce the stress I would otherwise feel.

–How would you describe yourself?

I feel that I’ve always been a very curious person. I’m not the kind of person who can focus on one thing exclusively and work on it until I master it. For people like me who find absolutely everything interesting, interpreting is probably the most interesting job there is. I am also the kind of person who doesn’t let it get me down for too long when a client gets angry at me. Even if I was bothered for three days, by the fourth day I’ll have forgotten about it and be preparing for my next job.

–Important messages from Japan are communicated to the world via you. Do you feel a sense of duty or responsibility?

I am aware that I am interpreting, but I do not feel responsible as a mouthpiece for the government. The mouthpiece is whichever government representative is speaking. I am just a facilitator, using my skill to help communicate the message effectively.

–Based on your experience interpreting for numerous prime ministers and other officials, do you feel like the communication skills of Japanese people are improving?

I don’t feel like the communication skills of the people I encounter on the job have changed dramatically. On the whole, I don’t think they were that bad in the first place. Communication skills are a skill of that individual. There are Japanese people who can speak fluently and communicate well in other languages, but there are also Japanese people who can’t even communicate comprehensibly when speaking Japanese to other Japanese people. I do think it is necessary to train to be able to communicate properly in Japanese. People tend to say that the reason they can’t communicate with foreigners is because they can’t speak the language, but that is why we interpreters exist.

Japanese people don’t enjoy debating. They feel that rebutting an opponent’s argument or having their own argument rebutted is a denial of their very person. Debate is like a sport. Winning the debate doesn’t mean you are against the other person. It is necessary to practice debate just like sports are practiced.

–There have been a lot of books recently focusing on presentations.

I think the Olympics are part of the reason for that. I was right there for the 2020 Tokyo Olympics and Paralympics bid presentation, and it was extremely well done. Prime Minister Abe also responded to questions very well, in a convincing manner. When I went back to the hotel and looked at the Internet after Tokyo was decided on as the host city, I saw a comment from an IOC member that Prime Minister Abe had responded clearly and succinctly to difficult questions. When I saw that, I felt that my English skills had been justified.

–What kind of training did you do to become an interpreter?

Students at interpreting schools use materials on a variety of topics to practice. But there is not really only one way to study. Personally, I read books and surf the Internet, trying to take in a wide variety of information. Ever since I was a student, I was very interested in why wars happen, and I continue to pursue this theme. I have also studied a wide variety of topics through the interpreting jobs I take, such as nuclear power, nanotechnology, government presentations and Buddhist proselytism.

–There are people who enjoy quoting proverbs and Chinese poems. Do you ever have issues interpreting difficult phrases like these?

Quite often. When I first started interpreting, there were even more people who used proverbs and Chinese quotes. There were so many things I didn’t know, but I worked through the embarrassment and asked other interpreters and clients about whatever I didn’t understand. I will never forget the things that I didn’t know at the time, so I benefitted in the end. But even more of an issue than proverbs or poems is puns. The Japanese people will laugh, but the foreign listeners won’t understand why. Even if there is time to explain during simultaneous interpreting, they still won’t laugh.

–What differences are there between English and Japanese?

The main difference is the culture of yohaku [blank space]. This concept doesn’t exist in American or British culture, and I don’t want Japanese people to be without this culture. I want them to be able to enjoy the culture of yohaku while also being able to make convincing statements without blank spaces when debating in foreign languages. Recently the Ministry of Education, Culture, Sports, Science and Technology has been talking a lot about global human resources, so I hope Japanese youth develop this skill. If not, they won’t be able to take advantage of their uniqueness. When debating in English, if I try and debate like an American when my opponent is American, clearly I will lose. I think they should debate using Japanese qualities.

–Do you think machine interpretation will become a reality?

I don’t think there will be machines that can perform interpretation at the same level as me during my lifetime. Machine translation can be useful when you have no idea what the text is about. But it is still necessary to have a person edit the translation. Although technology advances at an extraordinary pace, I don’t think I’ll be around long enough to see machine interpretation.

–Would you suggest interpreting as an interesting career path? 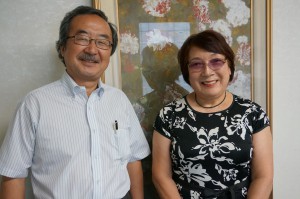 You get to see a lot of different situations when interpreting. There are not many jobs as interesting as this. There are the human interactions, power structures in companies, and interesting topics you interpret. Interpreting also lets you really feel like a part of the changing world, meeting political and financial leaders, Nobel Prize winners, and members of NPOs. There is no field that is more interesting than interpreting, so I would definitely encourage young people to try it out.

Born in Miyagi in 1943. Graduate of the International Christian University in Tokyo. In 1967, she joined Simul International, which had just begun its operations as Japan’s first simultaneous translation agency. A pioneer of conference interpretation in Japan, she has interpreted at G7 summit meetings, and numerous other international conferences and symposiums. She interprets in a wide variety of fields, from politics and economics to culture, entertainment, sports and science. She has also published Art of Communication (Shueisha Shinsho).