Former Ambassador of Japan to Canada; Chairman, The English-Speaking Union of Japan

Interviewed Mr. Sadaaki Numata, who has had a wealth of experience to deal with the foreign media as the Press Secretary of Ministry of Foreign Affairs and Ambassador and Minister of Japanese Embassies, about how Japan transmits information to the world and what kind of challenges it faces. 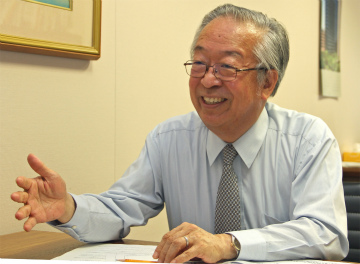 ―When do you realize the demands of transmitting information?

Always, through my work as a spokesman representing the government of Japan for almost ten years, including the work as Foreign Ministry Spokesman. I felt this most acutely at the time of the Great Hanshin Earthquake. I was the Minister Plenipotentiary at our embassy in the UK and was responsible for explaining the situation in Japan to the media there. Early in the morning, I was told that there were many TV crews outside the embassy. I faced the difficulty that I had to say something, without really knowing what was happening in Kobe. However, I felt that I should not avoid the media, since people in the UK apparently did not know much about earthquakes and thought they could be prevented. I was continuously responding to interviews one after another all the day, saying that even though Japan has confronted natural hazards and has tried to lessen the damage from them, natural disasters still take place and sometimes we get caught up.

―After the disaster in March 2011, there were voices from the foreign media criticizing the delay and insufficiency of information dissemination.

It is understandable through my own experience that the authorities tend to behave conservatively, hesitating to disseminate pessimistic information for fear of causing panic. However, it is better to release available information as much as and as fast as possible. Concerning the melt-down of the reactors at Fukushima No.1 Nuclear Power Plant and the release of the data of SPEEDI, the System for Prediction of Environmental Emergency Dose Information, the delays in releasing the information resulted in giving the media the impression that the authorities were hiding something. In Crisis Communication, anyone who is responsible for releasing information faces the dilemma, “To what extent should I release?” However, we are in the age of the Internet where information is spread instantaneously to the world and we cannot conceal it.

Rather, we should jump into the “information space” valiantly and project messages actively. In Crisis Communication, various people present diverse information, vying to capture the information space. The authorities have to sweep in, without hesitation. Mr. Nik Gowing of the BBC World points out the importance of “3F”: You have to be there First, and Fast, even if Flawed. Do not wait until all the materials come together. If there is any error in initial information, it should be amended as you go along. It is difficult to do this in practice, but I am feeling more and more that we may lose the information battle without such an attitude.

Another important approach is presenting unambiguous and forceful messages. As vast amounts of data are gathered, we have to analyze and prioritize them and decide what kind of information, including some bad news, should be released and how. It is also necessary to consider who says what. Distinction should be drawn between the messages that leaders should give and more detailed content that the personnel in charge should explain. It is necessary to think about the possible impact of the messages that we project. I feel that there is insufficient sensitivity to these points. In crisis situations, we would really need to set up a central command post to take firm control of all this.

－How should we transmit information?

Communication is essentially a two-way process of interaction. It does not suffice to make a unilateral declaration. We have to have a clear message, consider the receptivity of the other side, and persuade our interlocutors. There are not too many in Japan who are conscious of all this, maybe because of the Japanese mentality, which depends on passive communication, and of lack of training. Media training is highly valuable. I took it when I was in London. For instance, in TV-interviews, filming and broadcasting time is quite limited. Even if I speak for ten minutes, it could be edited down to only a few dozen seconds. Interviewers shoot questions rapidly. We have to manage to send our own messages through the rapid-fire exchange of questions and answers. It is important to train ourselves to think about the key messages that we wish to impart and to express them crisply and concisely.

~ Foster human resources who can engage in intellectual discourse ~

－What are the challenges in transmitting information?

In London, intellectual circuits are well developed where people who have interests in the same fields gather and discuss. However, there are few Japanese participants, even though organizers and other people invite them. When I was in the embassy, I was often asked to recommend lecturers and panelists for symposia and other events, but there were not many people who would fit the bill, and from time to time I myself ended up attending. It may not be the case in the field of science and technology, but in security and international relations, there is a dearth of people who can communicate effectively in such fora. We do need to promote dialogue in the intellectual domain. It is indispensable to foster human resources who can engage actively in intellectual discourse. Despite these needs, however, there seem to be more and more people who feel comfortable more in Japan and do not want to go abroad. Ten years ago, the number of students going abroad was nearly the same in South Korea and Japan, and double in China. Now, the number of Japan is half of South Korea’s and a tenth of China’s.

This is a hot topic, but the discussions seem to be trivialized into the topic of how English should be taught in schools. The stress should be on how to foster genuine communication skills as a tool to persuade others. It would not be quite fair to place the whole burden on teachers at elementary and secondary schools. Fostering global human resources should not be confused with the question of leveling up the English language proficiency of the average Japanese. We need to go a step further, and focus our target those people who would really be using English at the forefront of interaction with the outside world and devise ways to develop their practical communication skills.

There are more than 600 correspondents of foreign media in Japan. It is greatly important to cultivate them and FPCJ has a crucial role in this. If we make steady efforts to explain Japan’s good points clearly, they will understand. To that end, it is essential to maintain constant dialogue with them. I hope FPCJ will keep in close touch with the correspondents. I myself consciously tried to keep up with the correspondents in Tokyo when I was Foreign Ministry Spokesman. I also tried to nurture relationships with senior journalists such as the leader writers of major papers and magazines in the UK when I was in London. As I had lunches with them from time to time, they would come to phone me when they needed to write about Japan, asking for quotes or opinions and looking for clues to frame their articles. It takes time and effort, but this kind of communication results in fostering deeper understanding of Japan, compared with just holding regular press conferences.

Born in 1943. LL.B., Tokyo University. M.A. (Philosophy, Politics and Economics), Oxford University. Joined the Ministry of Foreign Affairs of Japan in 1966. Held positions such as: Director, First North America Division, North American Affairs Bureau; Counsellor, Delegation of Japan to the Conference on Disarmament; Minister Plenipotentiary, Embassy of Japan in the United Kingdom; Press Secretary/Director-General; and Ambassador of Japan to Pakistan and Canada. Worked also in Indonesia, the United States, and Australia. Served as an interpreter for prime ministers. Retired from the ministry in 2007. Executive Director, the Japan Foundation Center for Global Partnership until 2009. Advisor to the Kajima Corporation since 2007. Chairman, The English-Speaking Union of Japan since 2011.