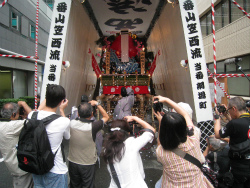 The tour, which visited Fukuoka City on the first day, started by covering the Goshin Ire Shinto ritual of Hakata Gion Yamakasa, Fukuoka’s well-known summer festival which attracts many visitors from all over the country. Mr. Toshio Kamo, Deputy Director of the Nishi-nagare group, said in an interview that they would like to send encouragement to Tohoku from Hakata (Fukuoka).

The participants tasted tonkotsu (pork based) ramen noodles, representing Fukuoka’s food culture, at Ippudo restaurant which has opened noodle shops overseas in New York and Singapore, and is now planning to make inroads into China and Hong Kong. Then the tour covered the Kyushu Shinkansen, which fully opened on March 12. The tour participants actually got on new type trains which use materials made in Kyushu and Japanese-inspired decorations, and filmed walls decorated with gold leaf and other unique interiors, which cannot be seen in other Shinkansen trains. They also asked JR Kyushu officials about cost of the trains, business conditions, and measures against earthquake and tsunami. 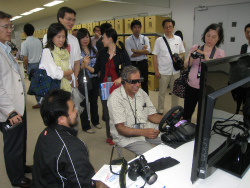 The tour also visited Poliphony Digital Inc., a computer game software developer. In a move of corporate risk diversification, they have transferred part of their head office functions to Fukuoka City since the earthquake. The journalists were given a briefing by city officials on the trend of moving offices to Fukuoka, and Mr. Kazunori Yamauchi, president of the company, talked about the reasons and merits of moving their office to the city. 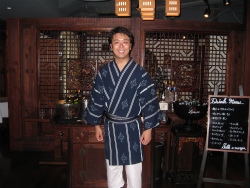 At the end of the first day, the tour had a press conference by Fukuoka Mayor Soichiro Takashima. Touching upon the decreased number of foreign visitors after the earthquake, the 36-year-old youngest Fukuoka Mayor in history described his efforts to advertise the safety of Fukuoka and Kyushu in general, and the resumption of foreign cruise ships’ calls at the city. The journalists asked questions about his career as a TV news caster, the possibility of standing as a candidate for the Olympic Games, and the issue of resuming the operation of the Genkai Nuclear Power Plant of Kyushu Electric Power Company.

On the second day, the tour took a two-hour bus ride to Ritsumeikan Asia Pacific University (APU) in Beppu City, Oita Prefecture. About half of the total 6,000 students of the university come from foreign countries, and a group of multinational students has posted 12-language videos on the Internet and provided information on the disaster. In the press tour, a representative of the group explained what they had done so far. 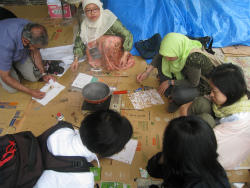 The university was in the middle of Indonesian Week, part of Multicultural Weeks, a trademark event of the APU. An Indonesian student introduced the tour participants to various events being held during the week, and they actually tried “batik” dyeing using wax.

In a meeting with the journalists, APU President Shun Korenaga explained the features and missions of the university, and also urged international media to make accurate and universal reporting on the issue of radiation levels after the nuclear power accident in Fukushima. They also had a chance to talk with Mr. Lu Fan, an APU graduate from China, who is now working at a travel agency in Beppu City.

The final destination of the tour was Kannawa Onsen hot spring resort in Beppu City. The participants met Mr. Kennichi Kai, Chairperson of the Foreign Tourists Welcoming Committee of Beppu City, who also runs a local hotel and has been appointed a “Visit Japan Ambassador.” After giving a briefing on their advanced efforts including handling foreign exchange such as South Korean Won and Chinese Renminbi, Mr. Kai guided the journalists on a walking tour of steamy back streets full of atmosphere. At the end of the tour, they freshened up by relaxing with a foot bath.