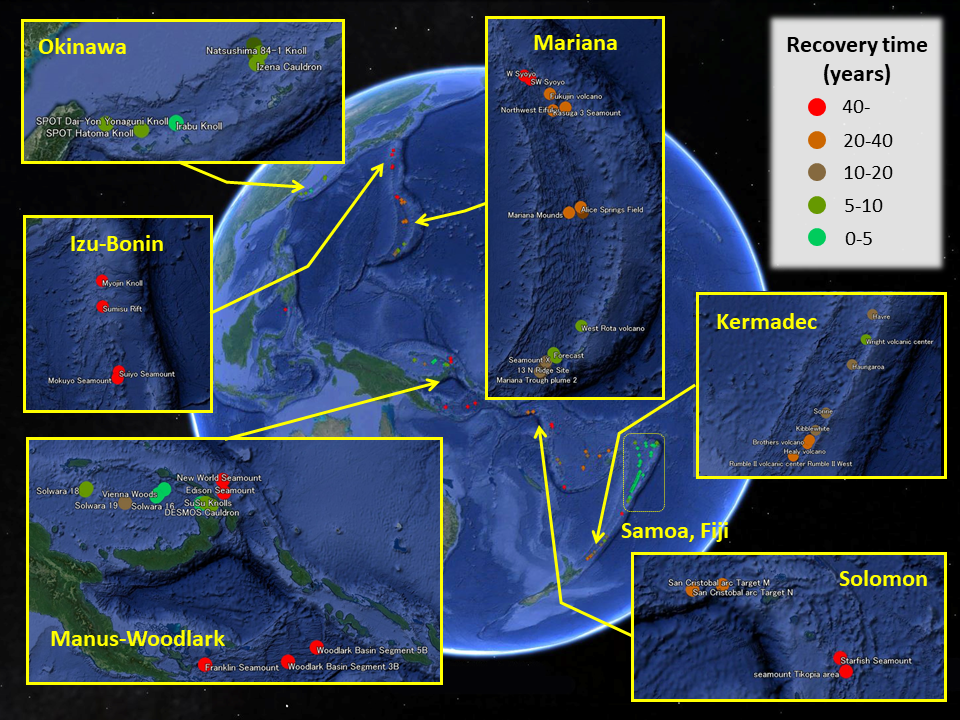 Mapping the resilience of chemosynthetic communities

in hydrothermal vent fields around the western Pacific Ocean

Hydrothermal vents support unique ecosystems populated by numerous species with unique adaptations. We aimed to determine the resilience of vent communities by investigating whether they are vulnerable or robust to natural disturbances, such as volcanic activity, and anthropogenic disturbances, such as mineral resource mining. One of the ways to assess their resilience is to measure the time required for a disturbed community to recover its original state. A mathematical model capable of predicting resilience would represent an important contribution to the management of these unique ecosystems. However, compared to most terrestrial and shallow water ecosystems, information regarding hydrothermal vent ecosystems, which are typically found at depths of over 1000 m, is limited.

We thus focused on a key factor for resilience, i.e., connectivity of vent communities through larval dispersal. This is because when most of the organisms are removed from a vent field, larval supply from other vent fields will be the prominent source for re-establishment. We used estimated larval dispersal between hydrothermal vent fields in the western Pacific Ocean and implemented it as a dispersal matrix of a population dynamics model.

We also found that, in certain cases, simultaneous disturbance of a series of vent fields either delayed or completely prevented recovery. Our method not only revealed the distribution of recoverability of chemosynthetic communities in hydrothermal vent fields but also introduced an important starting point regarding a practical tool for conservation strategies.

Recovery time of communities in HVFs in western Pacific Ocean.