The Nikkei：Push for steady denuclearization in US-North Korea summit

The Yomiuri Shimbun：Before any talks, confirm Kim’s intent to denuclearize 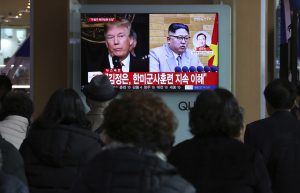 A meeting is to be held between US President Donald Trump and North Korea’s Kim Jong-un, Chairman of the Workers' Party of Korea, by the end of May, the first US-North Korea summit ever. This information was revealed by a South Korean national security adviser in the US on March 8. In editorials which ran on March 10, Japanese papers welcomed the summit, while questioning whether North Korea denuclearization would actually occur, whether this would disrupt the cooperation between China, Japan, and the US in putting pressure on North Korea, and how Japan should respond.

■ Papers’ Opinions on the Summit

The Asahi welcomed the news that the US-North Korea summit would take place, calling it “an important historical moment in the hostile relations which have continued since the Korean War,” and stating, “It would be welcome if tensions between the US and North Korea could become more relaxed, and progress made on a direct dialogue towards peace.” The paper further mentioned that denuclearization of North Korea was the main goal, and called for paying close attention to negotiations: “There is no indication yet of what degree of denuclearization North Korea is considering, or through what process it would be carried out.”

The Mainichi similarly stated, “The problem of North Korea’s nuclear armament has reached a major turning point… We would like to hope that the denuclearization of North Korea be carried out with certainty, making this summit one that brings peace and stability to East Asia.”

In contrast, the Yomiuri (in an extended opinion piece) suggested that the reason North Korea decided to shift to a policy of dialogue is “because the Trump administration has kept bolstering its military pressure and economic sanctions.” The paper stressed, “It remains to be seen whether North Korea - which has provoked Japan, the United States and other countries by declaring it possesses a nuclear arsenal - actually moves toward denuclearization.”

The Sankei (also extended) argued that with North Korea’s policy shift, “North Korea has touched on denuclearization. This demonstrates the success of the sanctions and other pressure from Japan, the US, and the rest of the international community.” The paper warned, “Too much optimism must be avoided. There is no guarantee that this summit will bear fruit. If it ends unsuccessfully, there is the possibility of increased tensions.”

The Nikkei, stating that “If there will be a meeting, it should be used to encourage steady denuclearization of North Korea,” noted that with nothing but an explanation from a South Korean national security adviser, “no concrete path can be seen” to North Korean denuclearization or promises to freeze nuclear development and missile tests. The paper also called for carefully watching the situation: “Although the current attitude seems to be that if this historic US-North Korea summit takes place there will be an immediate easing of tensions, caution is required.”

■ Concerns Over the Trump Administration’s Stance on Negotiations, and Japan’s Role

The Yomiuri, while stating it was only natural for the Trump administration to announce it would continue to apply “maximum pressure” on North Korea, noted, “It is worrying that the posts of U.S. ambassador to South Korea and special representative for North Korea policy remain unfilled. There are also few U.S. government officials with experience of negotiating with Pyongyang.” The paper called for the US government to rapidly prepare for negotiations with North Korea and develop a long-term strategy. Regarding Japan’s role. The Yomiuri mentioned that Prime Minister Abe will visit the US in April, and called for the two leaders to “share the latest information on the moves of the Kim Jong Un regime and a negotiating strategy.” In particular, the paper noted that “Even if the North abandons its development of nuclear missiles capable of reaching the U.S. mainland, the threat of intermediate-range ballistic missiles capable of hitting Japan would remain,” and argued, “Cautioning both Washington and Seoul against negotiating with Pyongyang in a rough-and-ready manner and making concessions, while also calling for a cool-headed response, is an important role to be played by Japan.” The daily called for Japan, South Korea, and the US to “hold multitiered talks to prevent disarray.”

The Mainichi also indicated concerns that the Trump administration still hasn’t filled positions related to North Korea, as well as stating, “Doubts and concerns are inevitable regarding this process of sudden top-level negotiations.” While praising President Trump for taking a positive attitude towards the summit, the paper also stated, “He must not overestimate his negotiating skills.” The Mainichi also argued that Japan must hold detailed discussions with the US before the summit, to ensure no agreements contrary to Japan’s interests are made.

The Sankei, welcoming Abe and Trump confirming during a telephone call their intentions to “continue applying maximum pressure on North Korea until concrete actions are taken,” argued, “This should be maintained until complete denuclearization has been achieved.” The paper also stressed that the issue of Japanese citizens abducted by North Korea is of the utmost importance, declaring that if this issue is not resolved, “Japan will not agree to actions such as lifting sanctions.”

The Nikkei similarly called for the US government to calmly assess North Korea’s true intentions, arguing, “The time has come to push for Kim Jong-un to carry out steady, irreversible denuclearization.” The paper suggested the Japanese government encourage the US to cooperate with Japan and South Korea, and to maintain pressure with sanctions, as well as seeking US cooperation in a rapid resolution to the abduction issue.

The Asahi noted that the Trump administration is “still not prepared to form a comprehensive policy for the Korean Peninsula. There is no assistant secretary of East Asian affairs at the State Department, and no special representative for North Korea policy. Resolving this abnormal situation is essential.” However, the paper suggested that in comparison to South Korea and the US, “Skepticism towards North Korea’s dialogue offensive remains intact” in Japan, and argued, “Relying solely on pressure and rejection leaves no response available for the current situation in which North Korea is opening a dialogue with South Korea and the US. Japan should have greater awareness of being a relevant party to the South Korea-US negotiations with North Korea, and be flexible enough to actively participate.”

English translations of The Yomiuri and The Mainichi are from The Japan News and The Mainichi, respectively.  Those for The Asahi, The Sankei and The Nikkei are provisional. The content of this page was made by the Foreign Press Center Japan and does not reflect the opinion of the Japanese Government or any other organization.