Magazine Articles of the Month: The Road to the Olympics 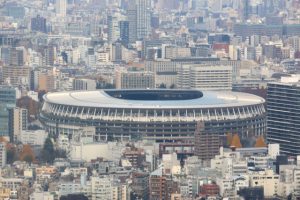 The Tokyo Olympic and Paralympic Games are approaching. With the COVID-19 pandemic showing no signs of ending, the media have been presenting numerous opinions on the feasibility of holding the Games, or whether they should be held at all. Major newspapers have also been carrying out public opinion polls on the subject. This article will provide a summary of key articles from the June issues of major Japanese magazines and related newspaper reporting.

■Special Feature: Trials and tribulations, the road to the Olympics—“Can they be held? The final push after hardships.” Interview with Tokyo Organising Committee of the Olympic and Paralympic Games Director General/CEO Toshiro Muto (Chuokoron, June)

Muto stated that with only North Korea having withdrawn from the Tokyo Games so far, currently there are high hopes for the Games, and athletes around the world are preparing under the assumption that the games will be held. He declared another delay is not an option due to the Beijing Winter Olympics and Paralympics being planned for 2022. He argued that the Games should be held even without spectators, and that it would be possible for the athletes to compete as long as efforts were made to keep COVID-19 under control, such as rigorous PCR testing and ensuring bubbles are maintained to avoid all contact.

He explained passionately that even if the Games were cancelled it would not save any money, and instead would be a lost opportunity to communicate Japanese culture and values to the world. Instead, by managing to hold the Games after overcoming numerous difficulties, with full COVID-19 countermeasures in place, and returning solidarity to the people of the world after the division caused by the pandemic, the Tokyo Games will go down in history as having a real legacy.

Muto stated that the past year had allowed time to think about what kind of event the Olympics and Paralympics should be, and further reinforced his belief in pursuing diversity and inclusion, including relationships with the LGBT community and people with disabilities, and that instead of the usual fanfare the Games should return to their roots as a simple athletic competition.

He mentioned that he had a strong bond of trust with the IOC, and that IOC President Thomas Bach and Vice President John Coates have both said that Japan is trustworthy and making the best preparations ever. On the topic of sexism, Muto stated that he believed the issue should be addressed in an appropriate manner, and that he had begun thinking about how to show to the world in some form what efforts were made for gender equality in these Games, once they have finished.

■ “What  those in favor of or against holding the Tokyo Games would like to say now,” education journalist Tetsuo Kobayashi (Chuokoron, June)

Kobayashi spoke with people involved in politics, business, and academia about their opinions on the Tokyo Games, and summarized the opinions of both supporters and opponents in this article while calling for further discussion without avoiding any of the topics being brought up for debate.

According to the article, of the two National Diet members from the ruling coalition who responded, Shuhei Aoyama said, “The JOC, Tokyo, and the national government are all working together to prevent the spread of infections. During the pandemic, schools and home life have made progress in moving online. People around the world will be able to share the excitement of watching the Olympics on their tablets. I believe the Tokyo Games will create a legacy in the history of the Olympics.” Tomoko Ukishima responded, “The world remains divided by the COVID-19 pandemic. That is why there is meaning in holding these Olympics to bring the world together as one. Also, we can show that we were able to overcome difficulties and hold the Games because it was Japan.” In contrast, one of the two National Diet members from opposition parties who responded to Kobayashi’s questions stated that she was proposing alternative competitions for each event in order to reduce the number of athletes competing, with the other pointing out the low number of PCR tests in Japan and the delay in beginning vaccinations, and arguing that a debate over cancelling the Games should begin in order to avoid restricting how the COVID-19 pandemic can be dealt with.

From the business world, Chairman Akio Mimura of the Japan and Tokyo Chambers of Commerce and Industry displayed anticipation: “Holding the Olympics and Paralympics is also an opportunity for major reforms in society as a whole. Innovative challenges have been carried out to prepare for the Tokyo Games not just in the field of sports, but in industry, technology, tourism, and education, including efforts such as instilling a barrier-free mindset and promoting parasports. It could be these efforts to solve social issues that will become the legacy of these Games. If the Games can be held in a safe and secure manner, it will provide the Japanese people with hope and happiness, and demonstrate Japan’s power to the world.”

Kanji Wakunaga, president of Wakunaga Pharmaceutical, confidently commented, “Japan can run trains without a single minute or second of delay. A country capable of this level of control can manage the schedules of athletes and spectators to maintain social distancing. I believe there is great significance and importance in harnessing Japan’s power to have the whole world agree, ‘These Games could only be held because it was Japan.’”

■Debate: COVID-19 state of emergency archipelago—“Be prepared to cancel the Tokyo Games even while they are being held.” University of Tokyo Graduate Schools for Law and Politics (Faculty of Law) Professor Shigeto Yonemura et al. (Bungeishunju, June)

In this debate, Keio University Professor Keiichiro Kobayashi stated, “On the question of whether the Games should be held or not, they should be held if possible, and I would like to hold them. There is some level of meaning in holding the Games in order to provide a common goal for society considering the fatigue from the pandemic.” When asked whether or not the Games could be held, he argued, “There is a high risk. International opinion is also a factor, and this is not an issue that Japanese people can decide on by themselves.”

Saitama Governor Motohiro Ono stated that, as the prefecture hosting the most venues after Tokyo, the prefecture would make a decision after carefully discussing with the IOC and JOC whether the Games can be held safely, and explained, “In a worst case scenario, such as a major cluster of infections occurring in a country’s athletes a few days before the Games, I believe the prefectural government will have to take responsibility to make the decision on whether or not to cancel the event.”

On April 10 and 11, the Asahi Shimbun carried out a national public opinion poll by telephone on what should be done for the Tokyo Olympics and Paralympics, with three options: “They should be held this summer,” 28% (27% in March); “They should be delayed again,” 34% (36% in March); and “They should be cancelled,” 35% (33% in March), with the numbers not changing significantly since March.