The Conundrum of South Korea 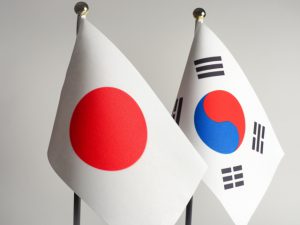 Relations between Japan and South Korea have deteriorated over this past year, and show no signs of improvement. With the Moon Jae-in administration’s negative attitude towards the agreement between Japan and South Korea on the comfort women issue, South Korea’s Supreme Court ordering Japanese companions to pay compensation to wartime forced laborers (October 2018), allegations that a South Korean Navy destroyer used its fire control radar to target a Japan Maritime Self-Defense Force P-1 patrol aircraft flying out of Atsugi (December 2018), Japan’s removal of South Korea from its whitelist of preferred trading partners (July 2019), South Korea’s retaliatory removal of Japan from its own whitelist of preferred trading partners (September 2019), and South Korea’s decision not to renew the General Security of Military Information Agreement (GSOMIA) with Japan (August 2019), numerous issues have been cropping up, and there are also reports of a boycott of Japanese products in South Korea and a decline in Korean tourists to Japan.

The September issues of monthly magazines covered Japan-South Korea relations extensively, and in addition to looking into their background, discussed how Japan should deal with this problem.

■ Bungeishunju, September, Yoshihide Suga (Chief Cabinet-Secretary) and Shinjiro Koizumi (Member of the House of the Representatives), “Let’s speak about Japanese politics in the Reiwa era”

Suga commented that Japan and South Korea were supposed to have reached a final and irreversible agreement on the comfort women issue in December 2015, but as there was a non-zero possibility that South Korea would overturn the agreement, Japan “had the American government release a statement welcoming the agreement, so they could act as a ‘witness’ to it,” and followed by stating, “I am sure the US is well aware of who is moving the goalposts here, Japan or South Korea.” Regarding compensation for the former forced laborers, Suga maintained his position that the issue was solved fully and finally with the 1965 agreement concerning the settlement of claims, and stressed, “The basic principle of international law is that when a promise is made between countries, all their national institutions, including the courts, must abide by that promise. All the previous South Korean governments took the stance that this issue was dealt with. The current administration is now saying it hasn’t been, and the Japanese government has no choice but to follow the principles of international law.”

Koizumi responded, “Politics requires more than just pure emotion or pure logic. Diplomacy is the same. Public sentiment is a factor, so a purely logical discussion is insufficient. However, the problem is that sometimes emotional approaches go beyond the point where they can be controlled. In such a situation, the question is how to understand the sentiment while building a logical solution, in order to gain the support of global public opinion and protect Japanese interests.”

■ Chuokoron, September, “How to solve the conundrum of South Korea without repeating the mistakes of the comfort women issue” (Yuki Asaba, professor at Doshisha University)

Asaba noted that while Japan is saying to South Korea, “Let’s faithfully fulfill the agreement that we both agreed on,” South Korea is using a different legal principle, that an agreement does not have to be fulfilled if the situation it is predicated upon has changed significantly and it would no longer be fair to carry out the agreement, it does not need to be fulfilled. He argued that the South Korean progressives, including President Moon Jae-in, strongly feel that the agreement should be changed to a “better agreement worthy of justice”

Asaba stated that the reason the comfort women issues has become a point of contention beyond that of the issue of historical understanding between Japan and South Korea is that the issue has become understood as being about “the universal human rights of women in armed conflict.” He also provided his analysis that although it is necessary to combine logic, proof, and examples in order to appeal emotionally to the global audience, but Japan tends to “focus too much on the justice of procedural fairness, failing to properly understand the potential of the justice of substance to change the situation.” He further emphasized that if the problems of the past were legally already dealt with, “Then a stance of ‘active pacifism,’ taking the initiative to consider how to deal with these problems as current issues, should be taken.” The professor concluded that when dealing with someone you cannot empathize with at all, it is important to understand why they took the actions, and what subjective meaning they have given their actions, and argued that without this “understanding of others’ rationale,” it would not be possible to solve the “conundrum of South Korea.”

­—The historical grudge trampling over the Treaty on Basic Relations between Japan and the Republic of Korea (Katsuhiro Kuroda, visiting editorial writer in Seoul for the Sankei Shimbun)

—The forced wartime laborer court decision is a return to the Joseon dynasty (Kunihiko Miyake, research director at the Canon Institute for Global Studies)

These articles from Bungeishunju give two different explanations of why South Korea has chosen to take actions that are incomprehensible to Japanese people. Kuroda noted that the 1965 normalization of relations was a compromise taken for the sake of pragmatic national interests, setting aside various points of contention without dealing with them. He argued that “As South Korea became more affluent and the people became more confident, thinking ‘Japan’s not so tough,’ the pride that they had ignored in the past for the sake of pragmatic benefits reared its head,” saying that the people of South Korea feel a strong historical grudge towards Japan. Kuroda gave his analysis that since South Korea was freed from Japanese rule in August 1945 as an indirect benefit of Japan losing the war, and not something the South Koreans won for themselves, they had unresolved emotions which they were venting with continuing anti-Japanese sentiment.

Miyake stated that the nature of South Korea’s actions can be understood from the perspective of history. He explained that the dynasties of the Korean Peninsula, such as Goryeo and Joseon, had paid tribute to China, and, “Korea went back and forth between its strong neighboring countries to achieve balance, like a pendulum, carrying out survival diplomacy.” Miyake suggested that after the collapse of the Cold War paradigm, the ascendancy of China, the nuclearization of North Korea, and the attempts to challenge the US-led world order “were opportunities to regain their autonomy in East Asia as far as South Korea is concerned,” and argued that the following scenario was becoming more realistic: “Uniting with North Korea, returning to the shape of the Joseon dynasty and carrying out pendulum diplomacy to achieve a balance between major powers, while exerting influence in East Asia.” In other words, he argued that South Korea had shifted to being part of the group working to change the status quo of a US-led world order, like China and Russia, and so it was no surprise they would disagree with Japan, which is working to maintain the status quo. Miyake concluded by stating that while Japan had few effective diplomacy methods at its disposal, “It is important to not let South Korea move too far away from Japan.”

Hosokawa (former head of the Security Trade Control Division at the Ministry of International Trade and Industry) argued that the root cause of worsening Japanese-Korean relations was the lack of understanding of the nature of the export control system by Japanese media, leading to South Korea overreacting to Japanese news reports without understanding the facts. He explained that the step taken by Japan only involves changing the process for authorizing exports to South Korea from blanket approval to individual approval, which is how exports usually operate, and stressed that its effects would be limited, and the situation should be considered calmly.

Hosokawa commented that a prerequisite for being on the whitelist is to engage in close discussions, but South Korea has refused these discussions for the last three years, and if “the relationship of trust for export control has collapsed,” then it is only natural to remove the country from the whitelist. He added, “The EU only gives special preference for export controls to eight countries including Japan, and South Korea is not on this list, so it could be said that Japan has simply aligned its export controls with those of the EU.”

According to Hosokawa, the Japanese media is criticizing the government for “conflating security and trade,” but export control is an area where those two overlap in the first place, and he argued that criticism without understanding what the system is was completely out of line. He ended by stating, “South Korea’s arguments are clearly following along the same lines as the distorted reporting by Japanese media. However, these arguments come from a lack of understanding of the export control system. As a result, something which should have been simple has become unnecessarily complicated, and bilateral relations are becoming even more strained.”

Watanabe stated that while it was regrettable that South Korea had abandoned the General Security of Military Information Agreement, it was not critical, and argued that the Japanese government should “ignore it with positive intent,” “doing nothing.” He commented that there would be no benefit to Japan escalating its response any further, and suggested that it was important to prepare for when the Korean administration changed in the future by reacting calmly, so that people in South Korea who think, “This government is irrational” will also think, “Japan has been quite calm.” For the sake of security in the long term, and to avoid pushing South Korea any closer to North Korea, not taking any more actions in this dispute should be considered, Watanabe proposed.