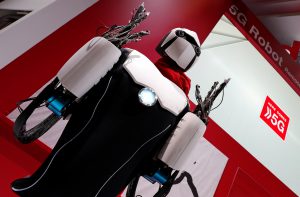 In an article in Voice titled “The digital technology solution to the declining birthrate and aging population,” media artist Dr. Yoichi Ochiai, associate professor and advisor to the president of the University of Tsukuba, wrote that with the birthrate rapidly declining in Japanese society, it was important to first recognize that society was already engaged in a “fighting retreat,” and the standard societal plan of increasing infrastructure to grow the population, and by extension profits and tax revenue, would no longer work. He then argued that the labor shortage could be solved using digital technologies such as robots, artificial intelligence, and 5G (fifth generation mobile telecommunications, which will begin being released in 2020).

In particular, regarding methods to care for people with dementia, of which there are expected to be twelve million by 2025, he commented, “In Japan, there is a tendency to have people with dementia avoid internet and smartphone use, but in countries such as the Netherlands they provide inexpensive tablets as part of care,” and argued the importance of using tech in medical care. According to Ochiai, in Japan one caregiver can support up to 15 people at once, but in the Netherlands they can support up to 40 or 50 people. He also noted that in Japan, “Instead of people trying to approach IT, efforts are being made to bring IT closer to people, but that is creating unnecessary development costs,” and argued, “It is important for people to approach tech,” such as by having AI and software deal with problems which people used to deal with.

In an essay in Voice titled “AI cannot handle meaning,” University of Tokyo Professor Emeritus Toru Nishigaki stated that the problem with the age of information overload is that the “quantity” and “significance” of information are becoming unrelated. In particular, explaining that AI is an application of computer technology that expresses human knowledge using specific forms, using combinations from deductive inference operations to reach a conclusion, he noted, “AI is only effective in the world of simulations with limited conditions. It is not effective at responding to the real world, where limitless scenarios arise.” He then stated that the fundamental reason for this is that “AI cannot handle meaning.”

Furthermore, regarding the belief of proponents of AI that “quantity will change quality,” Nishigaki argued, “Even if quantum computers are made, connecting words that contain multiple meanings, such as in a haiku, is no simple task. In a world that undergoes near infinite change, AI cannot function.” While mentioning, “To be clear, I am not against AI, I only want it to be used properly,” he stated that computers (machines) are only capable of processing data using formulaic logic based on algorithms, and that “The interpretation of meaning is not something computers can carry out in the first place. There is a definite difference between machines and living beings.”

In an essay titled “The argument that AI is useless,” anatomist Takeshi Yoro argued that in the “neural society” that would be created by AI, people will become even more information-based, and that a solution is necessary to overcome the issues that will develop along with this. Yoro stated that from the perspective of the brain, “Humans and AI are completely different,” and that “There is no possibility of AI becoming like a living being,” declaring that AI, as they function using binary algorithms, “Will never surpass the human brain at an intrinsic level.”

According to Yoro, a “neural society” is a society created by consciousness, a function of the brain, and an “information society” is a society which has “essentially become the brain.” As a result, he stated that the world would ultimately become rationalist, with only data becoming necessary as everything not needed in the pursuit of digitalization is eliminated. As an example, he noted that the “self,” including the body, which cannot be included in a computer system, would become unnecessary “noise” in a neural society. According to Yoro, “A world based purely on digital rationality will not be one fitting for humans as they are.”

As one prescription for how to deal with the issues caused by a neural society, Yoro argued humans should reconsider “the animal sense regarding ‘difference.’” He stated that one difference between humans and animals is that while humans can understand “being the same,” animals are unable to understand this. He explained the reason for this as “Animals depend on ‘the information from their senses=reality,’ and make determinations based on ‘differences.’”

Furthermore, Yoro stated that based on the assumption that there are things in the world which are intuitive or not based on logic, it is extremely important to “continue to think of the sense of recognizing ‘difference’ as important in our daily lives.” In other words, he argued that recognizing “sameness” and “difference” coexist in the world could be a solution to the neural society created by AI. Yoro argued that the antithesis to the universal conscious pursuit of “sameness” as determined by mathematics is the artistic pursuit of “difference,” and that “Art is the antidote to the neural society.”