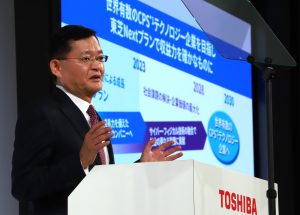 Although Toshiba fell into a financial crisis due to reasons including its 2016 accounting scandal and the failure of its US nuclear business, in a Bungeishunju article titled “Toshiba Chairman’s recovery declaration: From zero to a giant ship,” Toshiba Chairman Nobuaki Kurumatani announced that the company had dealt with its negative baggage, and although it was undergoing restructuring, it had shifted to being operated debt free. He also emphasized that the business strategy going forward would be based on social systems being changed by cyber-physical systems, which use digital technology to analyze real-world data in cyberspace and return it to the real-world with added value. He followed by stating, “In the next 20 years, this environment will create investment and demand, and it is likely a new giant will be born.”

Currently, cyber companies including GAFA (Google, Apple, Facebook, and Amazon) have grown into giant companies with a monopoly on the world’s cyberspace data, but a majority of that data is produced from the physical world, in areas such as power, shipping, and transportation. However, according to Kurumatani, the age of development competition with a zero-sum business model, such as ecommerce, in which companies compete to monopolize data, has continued “without creating any intrinsic value.”

Kurumatani further gave his opinion that the Japanese manufacturing industry had the highest level of “physical” technology, and also had the necessary component technologies for cyber development, and so, “Japanese companies are in an excellent position with their strengths in both kinds of technology.” Stating that cyber-physical technology would become the main battleground in the future, Kurumatani noted two key devices that can take advantage of Toshiba’s strengths were semiconductors and batteries.