The Future of Japan’s Imperial Family 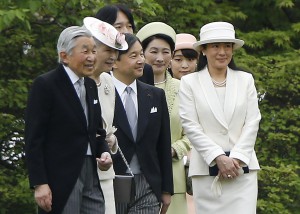 The Future of Japan’s Imperial Family

■ Takashi MIKURIYA,  Deputy Chairman of the    Advisory Panel on the Emperor’s Abdication,

and the University of Tokyo Professor Emeritus

“The truth of the advisory panel on the Emperor’s  abdication,” Bungeishunju, July

“Eliminate the unproductive confrontation between

the Imperial family and the national government,” Chuokoron, July

In an essay in Bungeishunju by Dr. Takashi Mikuriya, the University of Tokyo professor emeritus and deputy chairman of the advisory panel on the Emperor’s abdication, he comments on the special provision to the Imperial House Act enacted by the Diet on June 9 to allow the current emperor to abdicate, emphasizing the public support for this law: “This law was created in response to the 90% of Japanese citizens who agreed with the emperor after hearing his statement last year.”

Mikuriya also explains how a “retirement age” for the emperor was discussed by the advisory panel, but the idea was not adopted due to concerns it might destabilize the imperial family. In response to criticism that a special law for the current emperor only was “unthinkable,” he argues, “Once the law exists, it can be used as precedent, and over time that precedent can be established as customary law.”

Regarding the looming issue of the declining size of the imperial family, Mikuriya calls for the Abe administration to respond quickly: “I would like to see a revision of the Imperial House Act…. For issues dealing with the imperial family, it is probably easier for reforms to be carried out by a conservative politician than by a liberal one.”

Regarding the issue of the decreasing number of imperial family members, Mikuriya notes concern: “The time has come to start thinking realistically about the possibility of an abnormal situation with no emperor despite the position being part of the constitution…. As a self-described mainstream conservative, Prime Minister Abe should be able to handle the points of both the left and the right (in the debate over establishing female branches of the imperial family), and reach a consensus. The time for reform is now.”

In a discussion in Bungeishunju with Kyoto Sangyo University professor emeritus Isao Tokoro and journalist Katsumi Iwai, nonfiction writer Masayasu Hosaka stated his understanding that the emperor’s desire to abdicate was asking a question: “What kind of system can be created within the framework of a symbolic emperor, which has been accepted by the majority of Japanese citizens?” He further commented on the state of the imperial family: “It will change depending on how the public and elected officials at the time respond to the question of the imperial family. Right now, we are being tested on whether we are willing to give an answer to that question, including about the declining numbers of imperial family members.”

Click here for a comparison of Japanese newspapers’ editorials about the passage of the special provision to the Imperial House Act allowing the emperor to abdicate.