The Asahi shimbun: Entire society must continue debate on role of the emperor

The Sankei Shimbun: Work towards a smooth transition / maintain male succession of the imperial line

The Yomiuri Shimbun: Throne should be transferred smoothly after law enacted / Consider how to ensure stable succession 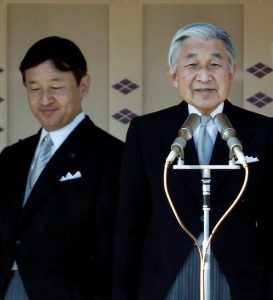 A special provision to the Imperial House Law allowing the abdication of the emperor was passed on June 9. This law was made in response to the emperor’s video message released to the public in the summer of 2016. The law is to be enacted within three years of promulgation, but it is expected the throne will be passed to the crown prince at the end of 2018, at which point the former emperor’s title will become joko. This will be the first abdication in 200 years, since Emperor Kokaku in 1817. This will be the first living abdication of the throne since the Meiji-era Imperial House Law specified that succession would occur upon the death of the previous emperor.

In their June 10 editions (June 9 in the Asahi), the five national dailies ran expanded editorials (Nikkei was standard size) about this special law that represents a major turning point for the imperial system in Japan, and welcomed the fact that the emperor’s abdication passed the Diet with wide-ranging support without being used as a “political tool.” However, opinions were divided regarding the question of what a symbolic emperor is, and on the establishment of female branches of the imperial family in response to the declining numbers of imperial heirs as mentioned in a supplement to the special law. There was a call for further debate as preparations get underway for the ceremonies of abdication and accession.

■ Understanding and Support from the Populace for the Emperor’s Abdication

The Yomiuri stated, “After procedures were carefully taken, the public’s empathy toward the Emperor’s feelings was cited as a reason for the legislation,” and approved of the special law recognizing abdication while maintaining the principle of lifelong reign as a “realistic result.” The paper also chose to emphasize the fact that the emperor “has built up substantial credentials” acting in matters of state as a reason for his abdication being enabled.

The Sankei welcomed the law as allowing the emperor “to abdicate as he desires,” stating, “The respect of the Japanese people for the emperor, and their desire to let him abdicate as he wished, encouraged the government and the Diet.” Concerning how the emperor will become “joko” after abdication, the paper argued that there was no chance of a power struggle between the “dual authority” of emperor and joko as occurred in the past, and emphasized, “Nothing must be done that would limit official actions carried out as joko.” However, the Sankei also noted that during the process of preparing the special law, “There were occasions in which it seemed questionable if there was sufficient communication between the office of the prime minister and the Imperial Household Agency,” and called for this kind of issue to be avoided in the future.

The Asahi stated firmly that the reason for widespread understanding and support from Japanese citizens for the emperor’s activities, as background for passing the special law, was “because these activities have been in line with such constitutional principles as respect for basic human rights, pacifism and the importance of international cooperation.” However, the paper was critical that, in order to ensure the special law passed quickly, the debate over the issue of the system of a symbolic emperor in the Diet “failed to do more than scratch the surface of the topic.” The paper also noted that the claim “his mere existence is enough of a blessing” by “rightists” who want to deify the emperor “not been accepted by the public.”

The Mainichi also stated that “empathy with the Emperor, who has earnestly carried out his official duties, led to consensus within the Diet,” while suggesting that the year-long debate leading up to the passage of the special law “looked at the current state of the symbolic emperor system, which has been taken for granted, with the Emperor and the public sharing their perceptions.” However, the paper also noted, “There was a lack of deep discussion about the symbolic emperor system including the appropriate form of his official duties.” Taking the stance that “It is probably only natural for the form of the ‘symbol’ to change in line with the personality of the emperor and social conditions at the time,” the paper suggested, “[The emperor] and the people should engage in discussion conforming to the current age.”

The Nikkei emphasized that the “deep empathy” from many citizens regarding the emperor’s visits to disaster-struck areas and to pray for war dead “supported the rapid passage of the law.” The paper also praised how the debate in the Diet was not used as a “political tool” by any of the parties, stating, “This was the result of maintaining a calm atmosphere while the matter was deliberated,” and suggested, “The careful deliberation and consensus building methods seen in passing the special law are a model for how other national policy issues should be handled.”

Contrary to the general welcoming mood and praise for the special law, the dailies were divided over the establishment of female imperial family branches mentioned in a supplement to the law and over the issue of imperial succession in the future. Following the Imperial House Law, the seven currently unmarried female members of the imperial family will have their imperial status revoked and become commoners upon marriage. However, the male imperial line after the crown prince and Prince Akishino consists only of Prince Akishino’s son Prince Hisahito.

The Mainichi argues the Diet should “quickly consider the establishment of female branches of the Imperial Family as a concrete measure.” Regarding whether to allow a “matrilineal emperor,” which conservatives are strongly against, the paper refrained from clearly stating its stance while noting, “Many people agree that this is a realistic approach when considering the background of gender equality and stable succession of the imperial throne,” and emphasized that “it is essential to discuss how the Imperial Household should be depicted in the future.

The Nikkei argued, “No delays may be permitted” for measures to deal with the declining number of imperial family members. The paper stated concerns that this decline “places the burden on only a few people, and could lead to a rift between the populace and the imperial household.” In addition to establishing female imperial family branches, the Nikkei also suggested, “There is a need to consider options such as a framework for female members of the imperial family to perform public duties even after marriage.”

The Asahi argued that the establishment of female imperial family branches is closely related to the issue of “how the emperor’s public acts should be legally defined and how the burden should be shared by the entire imperial family,” and only went so far as stating, “These are questions both the government and the Diet should continue discussing.”

“Trump did not deny the possibility of the United States withdrawing.” (The Yomiuri)

The papers showed concern over the lack of consensus among the G7, and criticized the Trump administration’s stance.

Taking a different stance, while The Sankei stated that “ensuring a stable line of imperial succession” was a critical issue, the paper also firmly declared that over 125 different reigns, “The principle of patrilineal succession has been maintained without exception for each emperor.” The paper further stated, “If matrilineal succession was to occur, this principle would be abandoned, and it would be tantamount to establishing a new dynasty,” furthering cementing its refusal of matrilineal emperors.

*English translations of The Yomiuri, The Asahi and The Mainichi are from The Japan News, The Asia & Japan Watch and The  Mainichi, respectively. Those for The Nikkei and The Sankei are provisional. The content of this page was made by the Foreign Press Center Japan and does not reflect the opinion of the Japanese Government or any other organization.