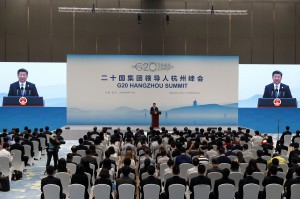 China has been taking a hardline foreign policy, as demonstrated by its maritime expansion in the South and East China Seas. In a conversation with Hokkaido University Professor Ken Endo in the November issue of Chuokoron, Tokyo University Professor Shin Kawashima notes, “The impatience of the Xi Jinping administration is showing in a variety of areas. In the current situation, economic growth having run into a yellow light is a major factor.”

However, regarding global opinions on China’s hardline foreign policy stance, Endo provides his analysis that “In general, the world does not feel as threatened, and not even particularly interested.” He suggests the reasons are that: 1) After the global financial crisis, China’s economic strength and capital helped the world; and 2) With the Ukraine Crisis, Russia is considered a threat by Europe, and so that is where their attention is focused.

Touching on US-China relations, Kawashima states that while the US had “some reservations” about China’s maritime expansion, those reservations were limited to those regions, and he argues that in reality, “The US and China are cooperating at the global level.” He notes that as a result, “Japan’s situation of confronting China’s hardline position on territory and sovereignty is not the standard worldwide,” stating that Japan’s stance against China is not necessarily widely shared by international society.

Endo states that “I don’t believe Japan’s foreign policy in regards to China is going as well as generally assumed,” and commented on cooperation between the US and China over environmental issues at the September G20 summit in Hangzhou, and on the ASEAN summit in Laos where criticism of China was restrained. He warns, “Unsurprisingly, China is both skilled and underhanded with its foreign policy. If Japan doesn’t take a more realistic view of foreign policy, China will take advantage of that in the future.”

In an essay in the November issue of Voice, Foreign Policy Institute President Kunihiko Miyake describes China’s foreign policy position as “No one in the Politburo Standing Committee of the Communist Party of China understands international relations,” states that “everything they do is a failure,” and also criticizes their foreign policy on the US as “a series of mistakes.”

In July this year, the Permanent Court of Arbitration at The Hague made a ruling on the issue of China building artificial islands in the South China sea that clearly rejected China’s claims of sovereignty “since ancient times,” but China ignored the ruling saying it “is invalid and has no binding force.” Miyake describes what resulted in this stance of China’s: “With increasing nationalism within China as a foundation, there is insufficient civilian control of the military, which then creates a fait accompli without the central government being aware.”

Regarding US-China relations, Miyake writes that although the Xi Jinping administration talked about “a new type of major power relations” between the US and China, and carried out repeated summits since starting three years ago, since China has not responded to American requests for demilitarization in the South China Sea and for a stop to cyberattacks against US companies, America’s hope has changed to disappointment.

He also argues that the “appeasement policy” that Japan, South Korea, and the US have been taking towards China was effectively a failure. Specifically, he mentions instances such as in 2010, when Japan arrested the captain of the Chinese fishing boat for crossing into Japanese territorial waters, but did not charge him; the US backing away from sending American ships into the South China Sea; and how was South Korea leaning towards China until recently. Miyake concludes that even with these kinds of policies to appease China, “China’s hardline stance did not change.”

・Uichiro Niwa, “Increase Japan’s influence: Is there a relationship of trust built with the US?,” Voice, November issue

Niwa first comments on the South China Sea issue: “The ‘nine-dash line’ that China arbitrarily established in the South China Sea is completely unreasonable, and in light of international standards this hardline policy deserves criticism.” Stating his opinion that “International society, including Europe and Asia, do not seem to be actively agreeing with Japan and the US in arguing for China to abide by international law with their clearly unjust claims,” he argues that “the current system of international summits should be fundamentally reformed, along with reconsidering international regimes,” and suggests restructuring the G7 into a G10 that includes China, India, and Russia.

Claiming that “In order to develop close Japan-China relations, it is necessary to make Japan-US relations unshakeable,” he touches on the lack of meetings between Prime Minister Abe and President Obama at the G20 Hangzhou summit and the ASEAN summit, noting, “It certainly does not seem like the leaders of the two countries are joined by a strong bond of trust.”