However, evacuation orders continue to be lifted, and reconstruction is steadily progressing with rebuilt public transportation infrastructure, as well as stores and hospitals being opened.

The Fukushima Innovation Coast Framework is a national project to build a new foundation for industry in the Hamadori area. To promote activity in six key fields, including decommissioning; robotics and drones; and energy, environment, and recycling, the framework is working to attract robotics companies, train personnel, expand networking opportunities, and disseminate information, based around the Fukushima Robot Test Field, a development testing ground for robots and drones at a scale rarely seen in the world.

This tour will cover initiatives to create new industries to recover those lost due to the earthquake and nuclear disaster.

To achieve the goals of the Fukushima Innovation Coast Framework, projects are underway to promote research and development and prepare headquarters for decommissioning; robotics and drones; energy, environment, and recycling; and disseminating information (the Great East Japan Earthquake and Nuclear Disaster Memorial Museum).

◆Fukushima Innovation Coast Promotion Organization staff will provide an overview of the framework, the goals of the project, and specific initiatives.

In the Industrial Recovery Base of the district of Nakano in Futaba, where evacuation orders were lifted in March 2020, the Great East Japan Earthquake and Nuclear Disaster Memorial Museum opened in September 2020. Through exhibitions and stories from survivors, this museum passes on to the future the lessons learned from the complex disaster Fukushima experienced. It should also function as a base for recovery and disaster prevention.

◆The tour will visit the museum, and learn about the current state of Fukushima as it recovers from the disaster, while passing on the truth about the Great East Japan Earthquake and nuclear disaster to future generations.

※This press tour is for viewing the exhibition only.

In March 2020, the Fukushima Hydrogen Energy Research Field (FH2R), containing one of the largest hydrogen production facilities in the world using renewable energy, began operations in Namie. With an area of 220,000 square meters, the electricity generated from solar panels covering 80% of that area is used to extract hydrogen from water through electrolysis. The amount of hydrogen produced in one day is equivalent to the electricity 150 average households would use in one month. Low-carbon hydrogen produced by FH2R was used as fuel for the athletes' relaxation house, some of the accommodation buildings, and vehicles related to the Games during the Tokyo 2020 Olympics and Paralympics held in 2021.

Currently, Michi no Eki Namie (Namie), Azuma Sports Park (Fukushima City), and J-Village (Naraha) have cogeneration systems installed to produce electricity and heat using hydrogen without releasing CO2, with the electricity generated used for parts of those facilities, such as lighting and air conditioning.

In addition to promoting the use of hydrogen energy in the town, Namie is encouraging businesses to carry out a variety of hydrogen-related trial projects, in an effort for local consumption of locally produced hydrogen. The town aims to attract companies and the younger generation by becoming a pioneer in bringing about a hydrogen society.

◆The tour will visit the FH2R to cover this research field with some of the highest hydrogen-production capabilities in the world. Officials from the New Energy and Industrial Technology Development Organization (NEDO), which is in charge of project management, will explain initiatives for using hydrogen and future plans for the project. 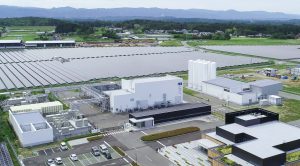 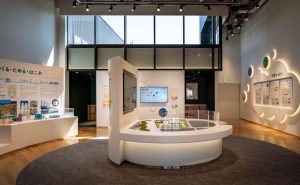 Since 2021, the town of Namie, in cooperation with Nissan Motor, has been carrying out a proof of concept experiment called Namie Smart Mobility for on-demand vehicle services to solve transportation issues for people living in and visiting the town. This initiative aims to increase movement throughout Namie and invigorate the community.

Registered users can call their vehicles at "virtual stations," which are located throughout the town and can be viewed via a smartphone app. Seven “digital stations” are located at 7 major locations in town, including JR Namie Station, Michi no Eki Namie, and the Namie Town Hall, where guest users who have not registered for the service can also call for a vehicle.

Vehicles run from 8:00 am to 7:30 pm (until 9:30 pm on Thursdays, Fridays, and Saturdays), and arrive a few minutes after being requested. They may also share a car with other guests if they are destined for a similar direction. The majority of current users are in their 20s or 40s providing transportation for many people in their daily life or work.

◆Mr. Naoki Miyashita of the Nissan Research Center will speak to the tour about the results of the proof of concept experiment and future challenges. The tour will also see the digital station at JR Namie Station, and hear from actual users of the service. 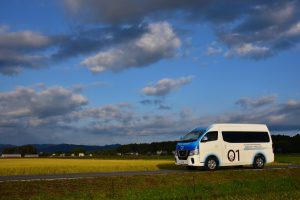 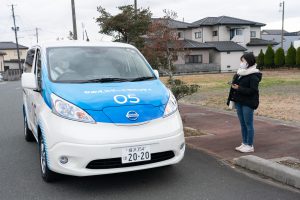 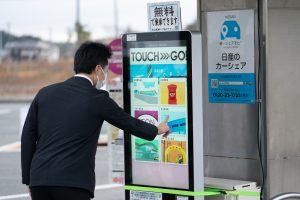 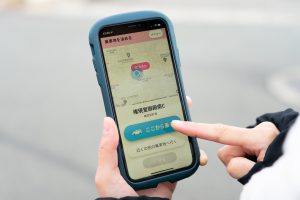 NARREC began operations in April 2016 as a facility for R&D and experimentation for the remote controlled robots vital to decommissioning the Fukushima Daiichi reactors. The facility has a virtual reality system that accurately replicates the interior of the nuclear reactors and allows decommissioning plans to be simulated in a manner close to reality.

The element testing area of the test building is equipped with testing facilities tailored to each environment, including mock-up stairs that can reproduce various staircases existing in the reactor building and a pool for robot testing in which water temperature and quality can be changed.

For the decommissioning process, remote controlled robots are being used to carry out work in highly radioactive areas instead of people, and it is expected that this technology will be further used for decontamination and debris removal. NARREC is also involved in developing human resources in the field, with training for remote control operations.

◆The tour will be able to experience the virtual reality system used to simulate work plans. The tour will also see robots actually being operated in equipment that simulates the inside of a nuclear reactor building, and observe pool for underwater robot testing that simulates the inside of a building flooded with cooling water and other substances.

*The areas which the tour visits may change depending on which experiments are being carried out on the day of the tour. Some restrictions will apply to filming and photographs. 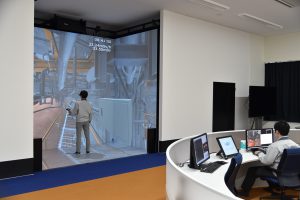 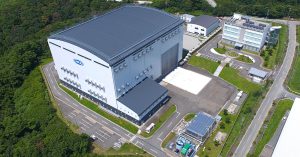 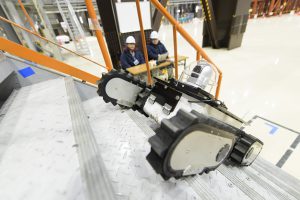 Fully opened in March 2020, with a size of approximately 1,000 meters east to west and 500 meters north to south. The field has an unmanned aircraft (drone) area, an infrastructure inspection and disaster response area, an underwater and marine robot area, and a development base area. This development testing ground has features that make it unique in the world, with functions for verification tests and performance evaluations to help accelerate development of field robots for land, sea, and air, such as drones, disaster response robots, and self-driving robots, which could be used in areas including logistics, inspecting infrastructure, and responding to large-scale disasters. Minamisoma, where the RTF is located, is putting effort into attracting companies and developing human resources, and so many startups and universities have entered the labs there, contributing to researching advanced technology, promoting the robotics industry, developing personnel, and stimulating the local economy.

◆The tour will hear a briefing on the background of establishing the RTF, its functions and facilities, and how it acts both as a base for recovery of the industry the Hamadori area lost due to the earthquake and nuclear disaster and as an important center for researching and promoting advanced technology. There will also be a tour of the facility. 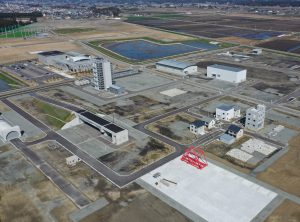 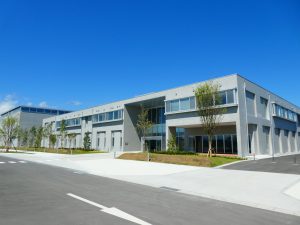 In 2017, the City of Minamisoma created the Minamisoma Robot Promotion Vision, with the goal of making Minamisoma into a city of robotics. A number of initiatives have been implemented to attract robotics companies to create new jobs and stimulate the local manufacturing industry, such as establishing the Fukushima Robot Test Field. As the first company to join the Minamisoma Reconstruction Industrial Park, Robotcom and FA.com built a plant incorporating the latest technology and equipment, which began full operations in June 2021.

This company manufactures and sells robot packages, which reduce the burden of building systems by integrating robots and peripheral devices, as well as commissions for processing large or specialized parts, a modeling service using 3D printers, and a technical training service.

The company has implemented initiatives for energy management to achieve carbon neutrality, a production system linking everything from sales to production equipment, and plant network security that will not stop production. With a 24-hour, completely automated production line brought about through a combination of digital and real-world methods, the Minamisoma plant is operating as a foundation for the next generation of manufacturing.

◆The tour will hear an overview about the Minamisoma plant and initiatives to promote research and development there, as well as touring the plant. It will also cover an exhibition room with a variety of robots. 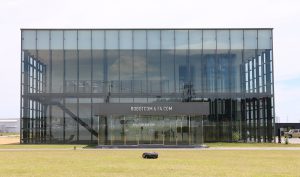 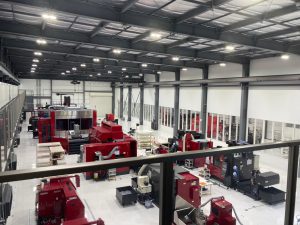 *The schedule may change without notice due to weather or other reasons.

5,000 yen per person including all travel and accommodation (breakfast and dinner included).

*Information on payment and cancellation fee will be provided to participants.

7. Measures to prevent spread of COVID-19:

Please follow the directions of the staff, such as taking temperature before the tour, wearing a mask, washing hands, and using disinfectant. In the following cases, you will not be able to join the tour:

(1) If you have a fever of 37.5°C or over when your temperature is taken before the tour starts

(2) If, in the 14 days before the day of the tour, you had a fever, cough, sore throat or other symptoms of a cold, difficulties in tasting or smelling, fatigue, shortness of breath, or other symptoms

(3) If, in the 14 days before the day of the tour, you came into close contact with someone who tested positive for COVID-19

(5) If, in the 14 days before the day of the tour, you travelled to a country under travel restrictions designated by the Government of Japan and have not completed the self-quarantine period, or came into close contact with such a person

(1) This tour is sponsored by Fukushima Innovation Coast Promotion Organization and operated by the FPCJ.

(2) This tour will require participants to bear a part of the cost, but is not a profit-making venture.

(3) Fukushima Innovation Coast Promotion Organization and the FPCJ take no responsibility for any accidents, injuries, illness, or other problems which occur during the tour. Tour participants should apply for travel insurance coverage individually should they decide it is necessary.

(4) There may be some restrictions on photographing and filming at the tour sites. Please follow the instructions of the staff in charge.

(5) Please be aware that videos and photos of the tour, and articles about it, may be posted by Fukushima Innovation Coast Promotion Organization and the FPCJ on their websites or social media.