“Noto Declares it is in High Spirits!”- Revitalization from the severe damage of Noto Quake

The Tour will fly from Tokyo to Noto in one hour and explore Wajima City, which is on the way to recovery from the Quake. Participants will enjoy the beauty of nature in Oku-noto (deeper Noto) and experience its traditional life and culture, covering the Wajima Asa-ichi, morning market, and the Wajima Great Festival. It also features the Noto people and their life after the Quake, visiting the Wajima-nuri lacquerware manufacturer who was unexpectedly given a new technique of designing a pattern by the Quake, as well as the local sushi chef who re-opened his sushi bar three months after the Quake.

The Noto Peninsula Earthquake that occurred on March 25 this year and registered 6 on the Japanese seismic scale (magnitude 6.9), the biggest ever recorded in Ishikawa Prefecture, in Wajima City, Nanao City and Anamizu-cho, brought an unprecedented catastrophe to the prefecture. The prefectural authorities swiftly conducted rescue and medical operation and also devoted all their energies to restoring Noto Airport and the Noto Expressway, the Peninsula’s lifeline, as soon as possible. As a result, the infrastructure and lifelines of the Peninsula quickly got on the track to full restoration.

The Tour will fly from Tokyo to Noto Airport in one hour and explore mainly Wajima City, which is on the way to recovery from the Quake. In 2005, Wajima and its neighboring villages, the home of lacquerware including the famous Wajima-nuri, were listed as a favorable tour destination in the Cultural Agency’s “My Journey Best 100” and awarded a grand prize named “The trip to visit “japan” (japan is an English word meaning lacquer)”. That was why ex-premier Junichiro Koizumi visited Wajima last year.

In this press tour, participants will enjoy the beauty of nature in Oku-noto (deeper Noto) and experience its traditional life and culture, covering the well-known Wajima Asa-ichi, morning market, and the gorgeous Kiriko Festival, a summer feature of Noto. In addition, they will do a story on the Noto people and their life after the Quake, visiting the Wajima-nuri lacquerware manufacturer who was unexpectedly given a new technique of designing a pattern by the Quake, as well as the local sushi chef who re-opened his sushi bar three months after the Quake. 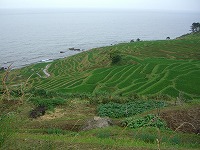 Depicting geometric pattern, an endless number (officially ‘sen’ - one thousand) of small rice paddies spread like uneven steps down steep sides of the hill which slopes from the foot of the mountain to the sea. The number of rice fields is more than 2,000, and the area of each per field is amazingly small, equivalent to just three tatami mats. As they are so small, they are not worked by machines. They have to be filled by people, and it takes three times the energy needed for working a rice field on level ground. Shiroyane Senmaida became a place of scenic beauty, nationally-designated cultural heritage in 2001. In May 2006, ex-premier Koizumi visited there and praised its beauty highly, exclaiming “What a magnificent view!” This year Wajima City introduced an ownership system and accept applications from people all over the country. Owners come to work on their own fields at the time of planting and harvesting rice. Shiroyone Senmaida Aiko-kai, a group of local farmers who love to cultivate Senmaida, is the core organization in preserving this breath-taking landscape. 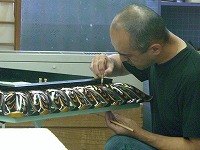 Wajima Lacquerware is known all over the world as an important intangible cultural heritage. Durability, one of the important characteristics of Wajima-nuri, is created by its unique production process – “Wajima Jinoko”, the powder made from diatom earth that is first steam-baked, crushed, and sifted, is mixed when priming the base, or linen cloth is applied on easily-damaged areas such as the rim and the foot of the ware to reinforce them. Thus, the whole production process requires at least twenty stages as well as more than one hundred patterns of hand work to produce the final item.
Wajima Kobo Nagaya, the collective ateliers of lacquerware craftsmen, shows visitors the complex process from the base shaping to the finishing touches, Makie or Chinkin decoration. The tour will visit the following two ateliers, talk to the craftsmen, and try Chinkin decoration (a design of dots and lines on the surface engrave with a chisel) on Wajima-nuri chopsticks.

Kiji Kobo: This base shaping atelier is the very beginning of the process that is rarely seen. A craftsman called Wankijishi is carving and turning Zelkova wood on a something like a potter’s wheel here. The round wooden block that will end up as a bowl becomes so thin and sheer that the light can been seen through it.

Nurishi Kobo: Here you see the coating and priming process to make Wajima-nuri strong and durable, using “Wajima Jinoko”, the powder made from steam-baked diatom earth. Some delicate stages of production including “Nunokise”, applying the linen cloth, and “Jienbiki”, removing the support, are added and coats of fine urushi are repeatedly applied. Thanks to this devotion, the finished product has a beautiful gloss and becomes strong enough to last for years. 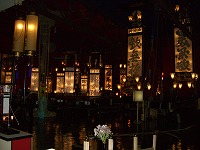 In the Noto region, there is the tradition that the town’s people and villagers traditionally carry around huge Shinto-style lantern floats named Kiriko at the local festivals in summer and autumn. Kiriko comes from Kiriko Toro, hanging lantern, which plays the role of a guard at the front and end of the mikoshi parade at night.
Kiriko Festival Museum regularly displays more than 20 Kiriko lantern floats, representative of Noto’s Kiriko lanterns, including a Wajima-nuri Kiriko produced in the Edo period. The tour will learn Kiriko’s history and structure to prepare for the real show on the night.

Kiriko Matsuri is the general term for the local Shinto festivals in which large Kiriko lanterns march to accompany the god as guards and night lights, floating in the night sky and sometimes wildly dancing. In the Noto region, a hundred or more Kiriko festivals are held between July and October every year.
The Wajima Taisai (Great Festival) is expected to take place for four days at the end of August at some locations in the city and is the largest in Noto region with the wild dance of the kiriko lanterns and large torches burning. During the festival, rituals are held at each local shrine in four different areas and the people of Wajima are proud their resplendent of the home festival. When the main mikoshi reaches the main shrine of the festival accompanied by kiriko lantern floats, young men climb up the torch pillar and scramble for three gohei, lucky strips of folded paper stuck in the top of lightening torch. This makes the climax of this great show.

Originating in Nafunecho, Noto, it is said to have begun in 1577 when the famous soldier Kenshin Uesugi invaded Noto. The region’s patriarch planned a sneak attack on the soldiers led by Uesugi. The Noto warriors beat their war drums harshly wearing bark masks and seaweed hair, to drive away the attacking enemy forces. Gojinjo Daiko Drumming is strictly limited to people who are born in the home of the Drumming. Their children practice twice a week, and the adults, every night. 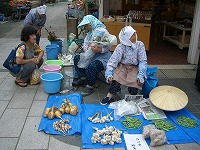 Wajima Asaichi, morning market, is said to have started more than one thousand years ago, some time in the Heian Period, when people gathered at the shrines on the day of the festival and brought vegetables or fish with them for barter exchange. Today, in Wajima, the day starts with calls from the stall-holders: “Buy something please!”, in the local dialect. The market starts at around 8:00 a.m., and about 200 stalls line up on the street, with a spread of vegetables, dried fish, and folk crafts on rush mats or wooden boards. The location of a stall usually passes down from parent to child then to grand child. Elderly women from neighboring farming and fishing villages sell products or fresh seafood.

Mr. Shoichi Miyakoshi, 59-year-old sushi chef whose wife was the only victim of the Noto Peninsula Earthquake, closed his restaurant after the quake but reopened it in late June. The tour will visit him at his restaurant and hear about his determination to restart his life. 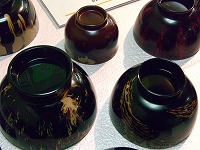 When the tremor hit the drying chamber, the drying of the final coating of the ware in the last stage of the production process stopped at the atelier of Inachu Corporation. After the quake, the plant manager Mr. Sakamoto opened the chamber and was surprised to see that a new pattern of decoration had accidentally been born on the surface of the ware. He artificially reproduced what had happened in the drying chamber at the time of the quake and created a new technique to decorate lacquerware, besides Chinkin and Makie, the orthodox ways of decoration of Wajima ware. Wishing to recover from the quake, the company named the lacquerware with the new kind decoration “Shinsai-wan”(‘Shinsai’ originally means earthquake, but the ‘Shinsai’ in ‘Shinsaiwan’ means ‘new color’) and started selling them at stores. Mr. Sakamoto will guide us to the atelier where the Shinsai-wan was born.

9. Soji-ji Soin Temple  located near the epicenter and suffered many scars from the quake 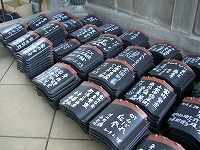 One of oldest temples in the Hokuriku Region, Sojiji Soin Temple in Noto was founded about 700 years ago as the headquarters of the Soto Sect but was destroyed by fire in 1898. Then the headquarters were moved to Tsurumi, Yokohama, and the temple in Noto became Soin, the original temple.
The Monzen area where Sojiji Soin Temple is located was very close to the epicenter and suffered the most serious damage from the quake. Currently visitors can see many roof tiles, carrying people’s messages of encouragement to the people in Noto after the quake, stacked up at the foot of the main temple gate. With the aim of repairing the main hall of the temple that had become old and frail, the temple started collecting donations by selling tiles five years ago. People could purchase one for 1,000 yen and write their wish on the back of it. But after the quake, the citizens of Noto and the neighboring areas and the Sojiji believers come to purchase tiles and write good wish for recovery from the quake. The tour participants will experience Buddhist vegetarian cuisine and see the scars of the quake at the temple.

3. Remarks:
(1) There are some restrictions on photographing and filming at the tour sites. Please follow the instructions of the officials on duty.
(2) Minami-Uonuma Center for Medicine and Welfare and FPC will not be liable for any inconvenience, trouble or accident that might occur in the course of the tour. (Stay away from mikoshi and burning torches in particular!)