In this critical situation, some aspiring sons and daughters of farmers, who are motivated to make changes in Japanese agriculture have appeared on the scene. After working in the city, they have realized the importance of agriculture and have gone back to farming.

The group led by children of farmers, "Noka no Kosegare Network", says, “It is necessary to change the old image of agriculture into a “Cool, Moving and Profitable” job in order to increase young people’s engagement in agriculture.” It supports young people who want to start farming. The tour will highlight young farmers in search of new opportunities in small family-run agriculture, the origin of Japanese farming.

Press Tour: Change Farming into “Cool Job”!
- Challenges by Young Farmers - (vol. 2 of the Series on Changing Agriculture in Japan)

The aging population combined with the declining birth rate and the young generation’s decreasing engagement in agriculture has caused continuous shrinkage of the farming population (23% drop in 10 years from 1998). The present situation is that more than 70% of the farming population in Japan is aged 60 or older. The Ministry of Agriculture, Forestry and Fisheries of Japan has set a goal to increase the food self-sufficiency ratio which is currently 40%, to 45% by 2015. However, this is difficult to achieve without young people engaging in agriculture. In this critical situation, some aspiring young farmers who are motivated to make changes in Japanese agriculture have appeared on the scene.

Many of these young farmers are sons and daughters of farmers who have returned to agriculture after working in the city for business enterprises. They have realized the importance of agriculture and the attractiveness of farming as a profession and have gone back to farming. They are becoming successful with their young power, ideas and experience of marketing and business gained when they were working for enterprises. They are remarkable as successful and surviving examples of small- sized and family-run type farming which is very common in Japanese agriculture.

The group organized by those young farmers, "Noka no Kosegare Network", says, “It is necessary to change the old image of agriculture into a "Cool, Moving and Profitable” job in order to increase young people’s engagement in agriculture." They urges the young generation to see the attractions of farming as a profession, and supports young people who want to start farming. Furthermore, they are planning the revitalization of abandoned farmlands in rural areas, which have been increased by the government’s rice acreage reduction policy. 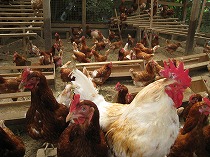 FPCJ's previous press tour, “Plant Factory Press Tour” on June 2, covered agriculture of large-size and organized management, which is backed up by the concerted efforts of industry, government and academia. This time with another point of view, as vol.2 of the Series on Changing Agriculture in Japan, the tour will cover young farmers in search of new opportunities in small family-run agriculture. As a result of the recession which has brought about a worsening employment situation, farming is rapidly attracting attention as an occupation. The tour will focus on the new trend of young farmers in the current situation.

- Change Agriculture into a “Cool, Moving and Profitable” Industry -

The Noka no Kosegare Network (which means “Network of farmers’ children”) consists mainly of farmers' sons and daughters in their thirties. They aim for “Cool, Moving and Profitable” agriculture and promote the engagement of the young generation in farming.

Most of them initially did not take over their family-run farms and instead worked for companies in the city. However, they decided to quit their jobs and go back to their home towns and farm since they realized the critical situation of current Japanese agriculture, the importance of its revival and its business possibilities for the future.

The network, as a platform connecting farmers and consumers, organizes farmer’s markets, and supports farmers’ marketing and creating brands. They also cultivate young people who plan to start farming, through lectures such as those held at the Marunouchi Asa University. The network aims to back up the shrinking agriculture in rural areas and has a project to revitalize abandoned farmlands in Ehime prefecture.

The CEO of the network, Mr. Yusuke Miyaji, is the oldest son of a pig farmer. After graduating from university, he worked for a company in Tokyo and gained experience of sales and marketing. He decided to quit his job and take over the family business, and established the Miyaji Pig Corporation. He got his pigs known through “barbecue marketing,” offering their meat to consumers and directly gathering their impressions.
“Miyaji Pork” has now become a top brand and has received the Minister's Prize from the Ministry of Agriculture, Forestry and Fisheries.

Mr. Miyaji will give a briefing on the purpose and activities of the network, and also introduce his experience as an agricultural producer. 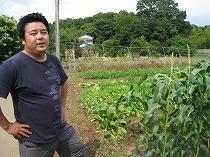 The Rainbow Family Farm located in Nagareyama City, Chiba, produces eggs from free-range chickens, and oganic vegetables without using agricultural chemicals. The farm uses a recycling system, using chicken manure as a fertilizer for the vegetables and vegetable waste as feed for chickens.

The farm directly sells high-value products and delivers to contracted consumers. The farm takes advantage of its location which is close to the big consumption center, Tokyo. Their business is urban agriculture in which “consumers can see the face of the producer.”

Mr. Kasahara, owner of the farm, regularly invites contracted consumers to let them see the way of production. He never uses agrichemicals and says, “It is not very difficult to produce vegetables without agrichemicals if you grow them in season, following the natural cycle.”

He is planning to collaborate with the administration of Nagareyaka City and has expectations of the city as a center of education and support for human resources in farming. “Nagareyama City is the best place for the people who want to start farming. They can study agriculture and get training while they work in Tokyo,” he says. 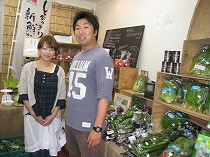 Very Veggie Hatachoku (“straight-from the fields”) Station is a shop founded to sell vegetables from the owner’s farm directly to consumers without going through the JA (Japan Agricultural Cooperatives) or wholesalers. The shop near JR Matsudo station has many customers who are attracted to the “real taste of vegetables.”

Mr. Saito, shop owner/farmer, says, “agricultural products are different from industrial products. The quality cannot be judged only by specification. When farmers meet and talk with consumers and sell products directly, the customers can understand the real taste of the product and the passion of farmers.”

Though originally the Saito family has owned farmland for generations, Masaaki once worked for a nursery company. While he was traveling around farms as a salesperson, he saw for himself the critical situation of present-day agriculture and at the same time, business possibilities of agriculture. 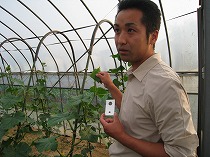 The Ogawa farm grows more than 100 kinds of organic vegetables without use of agrichemicals. On the farm, insects are the great power to grow safe and inexpensive vegetables.

Mr. Yukio Ogawa is a producer who is keen on insects like an entomologist. With his great knowledge of insects, he uses natural enemies to deal with each insect that harms vegetables. For example, he uses ladybirds to get rid of the aphids that harm strawberries and has succeeded in growing organic strawberries, even though growing strawberries without agrichemicals is known to be rare and difficult.

His farming has very much benefit from the ecosystem. Mr. Ogawa says, “My job is observing and maintaining the balance of the ecosystem.”

The Ogawas have been farmers for generations from the Edo Period. However, Yukio did not at first go into the family business. After graduating from university, he joined an agricultural machine manufacturer. By leaving his hometown, he could look objectively at the family business and noticed the business possibilities and advantages of farming in Kashiwa City, which is close to the consumption center, Tokyo. Then he decided to quit the company and took up farming.

3. Expenses: 2,000 yen per person including transportation and lunch

6. Remarks:
FPCJ will not be liable for any inconvenience, trouble or accident that might occur in the course of the tour.