-Tatara iron and Japanese swords, the bounty of Mt. Daisen 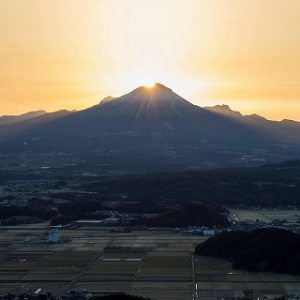 Compared to Mt. Fuji for its beauty, Mt. Daisen in Tottori prefecture appears in the Kunibiki myth in Izumo no Kuni Fudoki as “Mt. Hinokami of Hoki Province,” making it the oldest sacred mountain in Japan referenced in writing. Daisen Temple, partway up the mountain, was founded in 718, and this year marks its 1300th anniversary. (Right photo: Provided by Tottori Prefecture）

As a holy site for mountain worship, Mt. Daisen was closed to the public until modern times, allowing for the largest old-growth forest of Japanese beech [buna] in western Japan to grow around its base. The natural water protected by this forest brought ample blessings to the surrounding mountains, hills, and ocean, and helped protect and nurture people’s lives. The people living around the mountain still offer their gratitude to the mountain daily, looking up to it with respect.

High-quality iron sand can be found in the mountainous regions of Chugoku, including at Mt. Daisen, and this is where the culture of tatara, an ancient Japanese ironworking technique, was created. Combined with the plentiful water and charcoal available around Mt. Daisen, and the conditions were perfect for making Japanese swords. A masterpiece of the curved Japanese sword style was created in this area.

This tour, on the 1300th anniversary of Mt. Daisen’s first temple, will cover mountain worship and tatara iron making, examining the cultural traditions, industries, and lives of the people based on the bounty of Mt. Daisen which have continued from ancient times to the modern day.

Since ancient times, Mt. Daisen was worshipped as a mountain god. In 718, Daisen Temple was founded to worship Jizo Bosatsu by Kinren Shonin. Since then, Mt. Daisen became a major holy site known throughout Japan for syncretic Shinto and Buddhist worship based around Jizo Bosatsu, and at its largest Daisen Temple, located partway up the mountain, had over 100 temple buildings and over 3000 warrior monks under its control. However, as it was believed gods lived on the mountain, aside from a few ascetic monks chosen each year no one was allowed to climb to the peak.

With the Meiji government’s 1868 policy to separate Shinto and Buddhism, Daisen Temple lost its former glory, and people were allowed on to the mountain. However, even today a mystical ceremony is carried out once a year at Mt. Daisen, in which holy water and herbs are gathered from the peak in the middle of the night. The people living around Mt. Daisen feel there is something divine about it, and still offer their gratitude to the mountain daily.

The tour will visit the oldest building in Daisen Temple, the Amida-do, and hear about the history and current state of Mt. Daisen as a mountain of worship from Goken Shimizu, head priest of Kansho-in, a branch temple of Daisen Temple. There will also be an opportunity to try Zen meditation, and eat shojin ryori [Buddhist cuisine] made using seasonal ingredients, which helps worshippers at the temple recognize they are living with the blessings of the mountain. 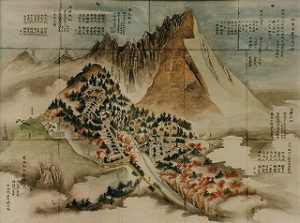 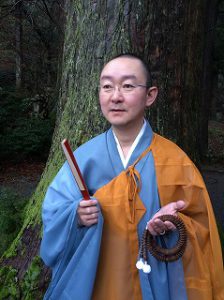 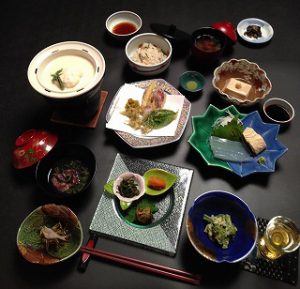 The land around Mt. Daisen is an agricultural area, blessed with fertile soil and plentiful water from the mountain. Soybean has long been a major crop in the area, and soybean was included in the diet as a good source of protein. In the early Showa period (1926–1989), “tofu huts” were established in villages throughout the area as workplaces where residents worked together to make the tofu local families ate. As time passed, many of these tofu huts have been abandoned, but in the Kuninobu district of Daisen Town, once a week the residents still go to the tofu hut in the early morning and use traditional methods to make the amount of tofu requested by each household. Residents say that the handmade tofu made from soybeans grown with the fertile soil and natural water of Mt. Daisen tastes far better than store-bought tofu.

To see the lifestyle of people living with the bounty of Mt. Daisen, the tour will visit the Kuninobu tofu hut and see tofu being made with traditional tools. 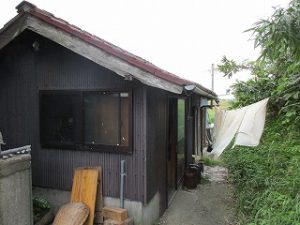 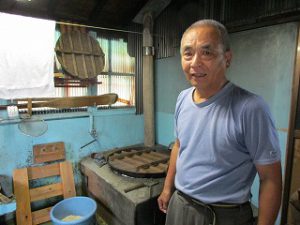 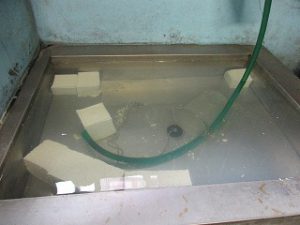 With the lowest population of Japan’s 47 prefectures, Tottori has become a popular destination to relocate to. One study shows that in the six years from 2009 to 2014, a total of about 4000 people moved to the prefecture (the most of any prefecture in Japan). In 2016 and 2017, municipalities in Tottori were also first place in a ranking of rural areas people want to live.

One of the areas in Tottori that people are relocating to from cities is around Mt. Daisen. Takayuki Nakamura, originally from Saitama, relocated to Daisen Town fifteen years ago. Freediving without a boat or any scuba equipment, he gathers oysters, abalone, and seaweed which is sent throughout Japan. He is also a core member of Kizukikai, an organization of people who relocated to Daisen Town involved in community building and supporting relocation. Thanks in part to Kizukikai, the amount of people who relocate permanently to Daisen Town is particularly high, and recently there have been more people in their early 20s relocating there.

The tour will see how Mr. Nakamura makes his living off the bounty of the sea by freediving, before going to Kizukikai’s headquarters, a hundred-year-old traditional Japanese house. There, Mr. Nakamura will discuss why he decided to relocate to Daisen, what life is like there, and Kizukikai’s activities. Interviews are also planned with people who have moved to Daisen more recently. 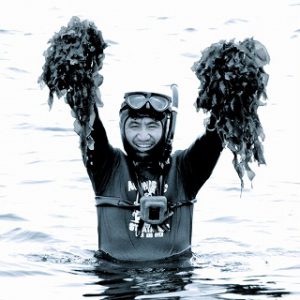 2. Tatara Iron and Japanese Swords, the Bounty of Mt. Daisen

Tatara iron making is a process which uses a wood charcoal fire to smelt iron sand into iron. Said to have begun in the sixth century, this unique Japanese iron making method was used until Western modern iron making techniques were adopted. Irontown, in the Hayao Miyazaki anime film Princess Mononoke, is actually called Tataraba in the original Japanese. Okuhino (Tottori) and Okuizumo (Shimane), where quality iron sand was available, were long known for making quality steel suitable for blades, and from the  Bakumatsu (1853–1867) to the middle of the Meiji period (1868–1912), these regions produced almost all of Japan’s iron, helping to support the country’s modernization.

The tour will visit the Tatara no Gakko museum in Okuhino, one of the traditional centers for tatara iron making, and learn about this uniquely Japanese method of iron making. Members of the Hokinokuni Tatara Kenshokai will explain the history of tatara iron making in the region and how it helped support Japan’s modernization. The tour will also visit Blacksmith Workshop Miyamitsu, a blacksmith in Okuhino which makes products including kitchen knives, to see a craftsman keeping alive the spirit of his predecessors who made tatara iron. 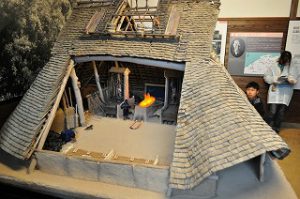 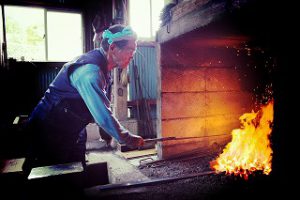 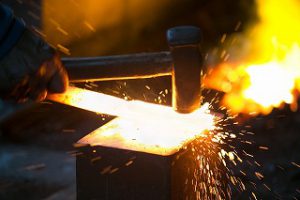 The beauty of Japanese swords has attracted many fans both within Japan and around the world. Recently, many young women have been attending exhibitions of Japanese swords held throughout the country, and the term “touken joshi [sword girls]” has been coined to refer to them. Tamahagane steel was essential to making Japanese swords, and this precious steel could only be made with tatara iron making. The Daisen area in Hoki Province, with both quality iron sand and plentiful water and wood charcoal around Mt. Daisen, had the perfect conditions for making swords, and so master swordsmiths gathered there. One such smith was Hoki Yasutsuna, a master swordsmith of the Heian period (794–1185), considered to be the earliest smith to make the characteristically curved Japanese swords. One of his works, a National Treasure of Japan now in the Tokyo National Museum, is said to be the greatest Japanese sword ever made.

The tour will visit the Yonago City Museum of Art, which has a special exhibition celebrating the 1300th anniversary of Daisen Temple, where there will be an opportunity to see swords made by Yasutsuna, along with an explanation of the process of making Japanese swords. 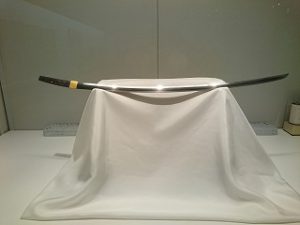 Techniques to temper and harden steel in order to create a quality product reached a pinnacle of sorts in the creation of Japanese swords. Kikusui Forging, a forging company in Yonago, was founded by its previous company president. He had worked as a swordsmith before the war, but once the production of Japanese swords was banned under American occupation, he began to make kitchen knives and razor blades along with the other smiths he knew. Even with the work flow having shifted from relying on the skill of a master smith to industrial production using the latest equipment, the company philosophy is “applying the techniques of master craftsmen to the present day.” Using advanced forging techniques, the company currently provides over one thousand products, from bicycle parts to machinery components. In recent years, Kikusui Forging has also been developing forging techniques using new materials such as magnesium, which was considered unsuitable for forging due to its weakness to heat.

After hearing about the history and forging techniques of Kikusui Forging, a company with roots in Japanese swordsmithing, the tour will see the process for making industrial parts. There will also be an opportunity to see the Japanese sword forge the previous company president built on company grounds and forged swords at after the ban was lifted. 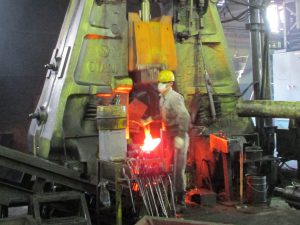 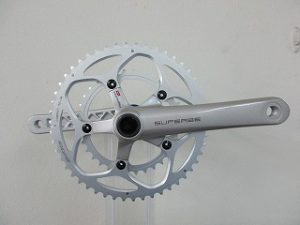 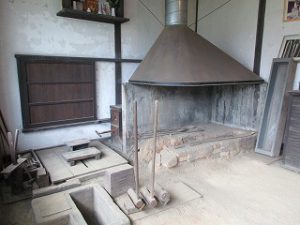 In 2007, Tottori’s population dropped below 600,000 for the first time. Mr. Shinji Hirai was elected as governor that same year, and facing the issue population decline, with a decreased birthrate and aging population, he started aggressive policies to support raising children. When he implemented free daycare for children in rural areas, there was an increase in the amount of people relocating to Tottori. He also implemented free daycare for the third child onward in urban areas, as well as free daycare for the second child depending on income and other conditions. Tottori was the first prefecture in the country to implement this system. This project was only possible due to the low number of children limiting the amount it cost, but as a result of focused investment in supporting young families, the total fertility rate in Tottori rapidly increased from around the national average of 1.43 in 2007 up to 1.66 in 2017 (7th highest in Japan). With expanded support for relocation to Tottori, the number of people relocating there from outside the prefecture has also rapidly increased, from 504 in 2011 to 2127 in 2017.

With the attitude that “there are things Tottori can do only because it is a small prefecture,” Governor Hirai implemented successful projects even with Tottori having the lowest population in Japan and low income. He will discuss his vision for the future of regional revitalization, and existing measures to deal with population decline and aging populations.

(1) This press tour is sponsored by the Tottori Prefecture Tokyo Office, and planned and operated by the FPCJ.

(3) This press tour will require participants to bear part of the cost, but is not a profit-making venture.

(4) Neither Tottori Prefecture Tokyo Office nor FPCJ will be liable for any inconvenience, trouble or accidents that might occur during the tour.

(6) This press tour is intended to provide opportunities for news coverage. We request that all participants send a copy of the content of their coverage (article, video, or audio in the case of radio) to Tottori Prefecture Tokyo Office through the FPCJ after their reports are published or aired. When your report is in a language other than English or Japanese, we also ask you provide a summary in English or Japanese. With receiving your application, we assume that you agree to these conditions.