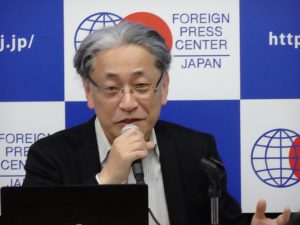 The Sokui-no-Rei series of ceremonies announcing the enthronement of a new emperor will take place over ten days, starting on October 22. The new emperor, speaking for the first time after his enthronement on May 1 this year, spoke about fulfilling his responsibility as a symbol of the unity of the people of Japan while standing alongside them. In the six months since his enthronement, the media has shown him receiving guests such as US President Trump as well as actively interacting with the people in visits around Japan with the empress. What will the role of the emperor be in the Reiwa period, and how does the Japanese public view the new emperor?

With the Sokui-no-Rei ceremonies approaching, the FPCJ has invited Dr. Eiichi Miyashiro, Senior Staff Writer at the Asahi Shimbun and an expert on history who has written many articles about the imperial household, to speak about this topic.