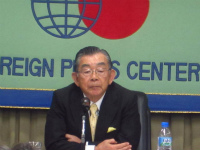 Because of the debt crisis in Europe and other factors, the Chinese economy is reported to have been slowing down since last autumn. In June this year, Japan and China started direct transactions between their currencies. This is expected to further expand and facilitate the two countries’ transactions and trades, which had been based on U.S. dollars up to then. FPCJ has invited Mr. Toyoo Gyohten, President of the Institute for International Monetary Affairs, to share his views on the current state and future prospects of the Chinese economy, and its impact on the Japanese economy.

【Briefer Profile】
After graduated from the University of Tokyo, Mr. Gyohten joined the Ministry of Finance (MOF) in 1955. Before he was appointed to Vice Minister of Finance for International Affairs in 1986, he occupied various senior positions including Director-General of International Finance Bureau at the Ministry of Finance and also served for the IMF and the ADB on lease. After his retirement in 1989 he was a visiting professor at Harvard University and others. In 1992 he became the Chairman of the Bank of Tokyo, Ltd (currently the Bank of Tokyo-Mitsubishi UFJ, Ltd.). Since 1995, he has been President of the IIMA and concurrently serves as Senior Advisor to the Bank of Tokyo-Mitsubishi UFJ, Ltd. He was appointed to a special advisor to P.M. Obuchi in 1998 and more recently was an advisor to the Cabinet Secretariat (special envoy to P.M.). He now serves as Special Advisor to the Minister of Finance.

※FPCJ supporting members and embassy representatives may also attend the briefing as observers (admission free).
※No car park is available. Please use a nearby car park if you come by car.