On July 1 and 2, 2021, a press tour was held to the disaster-affected Sendai coastal area. The tour was sponsored by Sendai City, and planned and operated by Kinki Nippon Tourist Tohoku and the FPCJ.

The tour had a total of nine participants, with journalists and camera operators from Germany, Hong Kong, South Korea, and Vietnam. The journalists covered the state of reconstruction and current issues ten years after the Great East Japan Earthquake, as well as disaster prevention tourism initiatives Sendai City is carrying out in collaboration with the Tohoku University International Research Institute of Disaster Science.

◎See the tour announcement for more details on the stops on this press tour.

Day 1
Sendai 3/11 Memorial Community Center (Sendai)
The tour visited the Sendai 3/11 Memorial Community Center, a facility for learning about the Great East Japan Earthquake. There, they heard about Sendai’s reconstruction efforts and disaster prevention tourism initiatives, and saw a 3D map of the surrounding area, including the disaster memorial locations they would be visiting later. The group also saw the permanent exhibition about the damage from the disaster and reconstruction efforts. 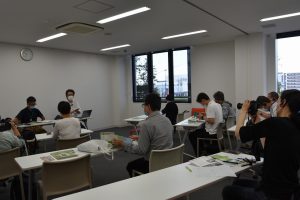 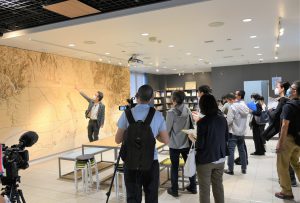 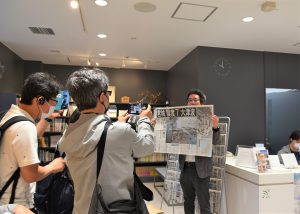 Arahama Cenotaph, Coastal Embankment, House Foundations (Sendai)
The tour visited the Arahama district, where over 190 people were lost to the tsunami during the Great East Japan Earthquake, and nearly the entire district was designated as a “disaster risk area” after the disaster. After the group gave their respects at a cenotaph, they saw the view of Fukanuma Beach, which used to be the only swimming beach in Sendai before the disaster, from a nine-kilometer-long embankment built along the coast, and visited the foundations of homes destroyed in the tsunami which have been kept as a disaster memorial. 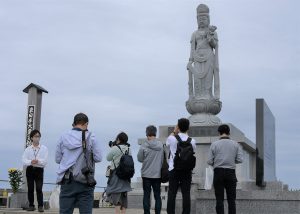 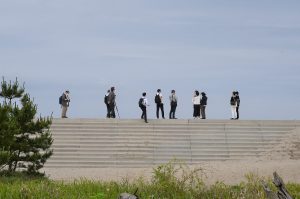 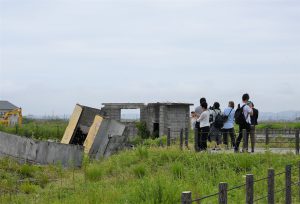 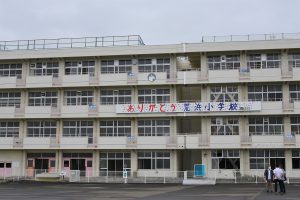 Water from the tsunami reached the second floor of Arahama Elementary School, but the 320 students and local residents who had evacuated to the building all survived. The group heard about the tsunami striking the school and efforts to teach lessons learned from the disaster while touring around the school. From the roof of the school, the group could see the layered tsunami defenses nearby including the Arahama District Evacuation Hill (ten meters above sea level), the coastal embankment, and a raised road. The journalists asked questions about the number of visitors to the school, which opened to the public in 2017, and the goal behind building a model replicating the Arahama district. 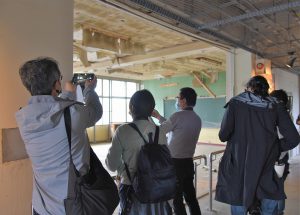 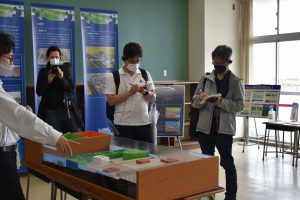 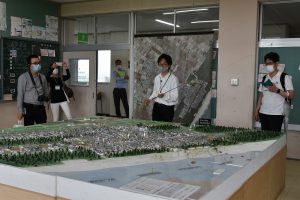 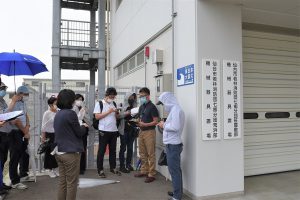 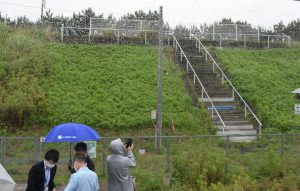 Araihigashi Reconstruction Public Housing (Sendai)
The tour visited reconstruction public housing, and heard from a Sendai social welfare council worker about how people affected by the disaster were rebuilding their lives, as well as hearing from the residents’ association and local social workers about building communities, the circumstances of the residents, and their experiences in the disaster. The journalists asked many questions, such as what people were doing at the time of the disaster, how their life changed afterwards, the mental effects of the disaster on people, and how the support people need has changed over time. 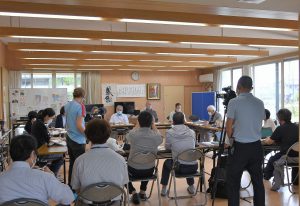 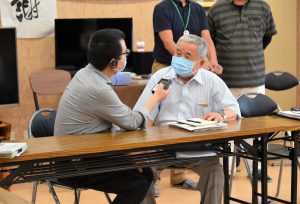 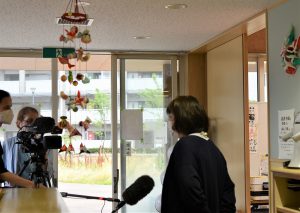 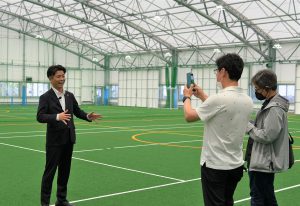 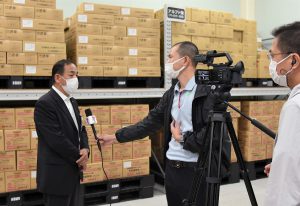 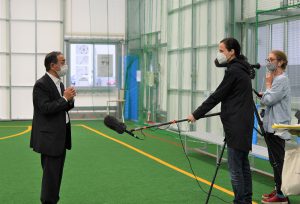 Day 2
Tsunami Reconstruction Prayer Center: Memoire de Yuriage
On the second day of the tour, the group visited the Yuriage district in Natori, where around 750 people lost their lives in the tsunami, and met with Ms. Yuko Tanno, the representative of an association of the families of 14 students at Yuriage Junior High School who died in the tsunami, who is acting as a kataribe (storyteller) at the center to pass on memories of the disaster. She explained the mental care activities the center carries out for people affected by the disaster. The journalists asked her what her mental state was at the time of the disaster, what differences there were in the issues she faced ten years ago and now, what she focused on in her activities as a kataribe, and more. 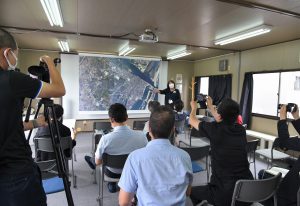 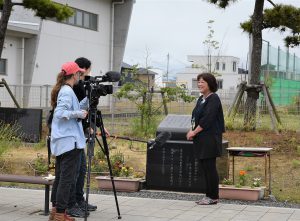 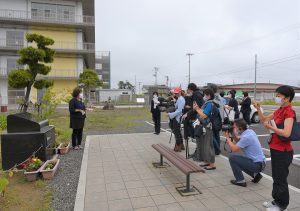 Maruta Suisan Co., Ltd. (Natori)
The tour visited Maruta Suisan, a seafood processing company which has been in Natori since before the disaster, and heard from executive director Mr. Futoshi Aizawa about their recovery aided by a fateful encounter with shirasu (baby sardines), the development of the Hokugen no Shirasu (“Northern Limit Shirasu”) brand they developed based on their shirasu being the northernmost shirasu caught in Japan, and how they opened a café. At the harbor, the tour also saw ships preparing for the shirasu fishing season, which starts in July. The journalists asked question such as whether it was difficult to fund reconstruction of the processing plant, the number of people who come to the annual shirasu festival, and Mr. Aizawa’s thoughts on the Recovery Olympics. 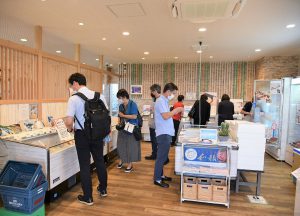 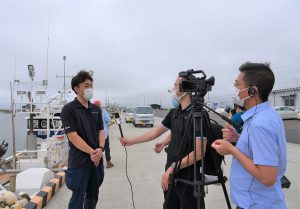 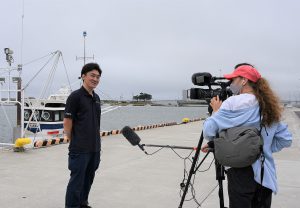 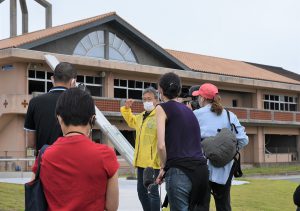 In the afternoon, the tour visited Nakahama Elementary School, the only disaster memorial remaining in the south of the prefecture. The principal at the time, Mr. Inoue, evacuated 90 students and staff to the attic storage area under the school’s roof during the disaster, and he spoke with the tour about how he made the evacuation decision based on the earthquake that occurred off the Sanriku coast two days before the Great East Japan Earthquake, what it was like facing five large tsunami over the course of a single night, his feelings after everyone was safely rescued, and his current activities to pass on memories of the disaster.

The journalists asked questions such as why he decided to evacuate to the school roof instead of towards the mountains, how children handled the memories, and whether there was some kind of event held for children who suffered through disasters other than the Great East Japan Earthquake.

Agricultural Production Corporation GRA Inc.
The tour visited GRA, which was established the year after the disaster to create new jobs and help recover the local strawberry farming industry, which suffered heavy damage from the tsunami. They heard from Mr. Hashimoto, GRA’s vice-president and head of its cultivation department, about what led to establishing GRA, its program supporting new farmers, and the Migaki-Ichigo strawberry brand (“edible jewels” which cost one thousand yen per berry). The tour also heard from one of the trainees about their cultivation methods. The journalists asked questions about the current progress towards the original goal of creating new jobs, the economic impact of running a tourist farm, and their hopes for the Recovery Olympics. 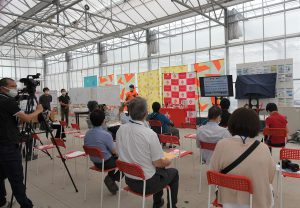 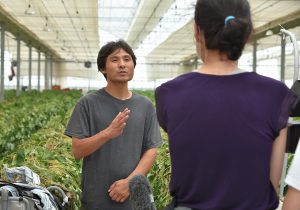 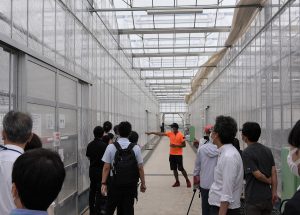 Interview with Sendai Mayor Kazuko Kori
After leaving the town of Yamamoto, the tour interviewed Sendai Mayor Kazuko Kori as the final event of the tour at Sendai City Hall. Ms. Kori started by expressing her gratitude for the support shown by other countries, and explained the city’s initiative to become a disaster-resilient and environmentally-firendly city. The journalists asked about preparations for disaster risks, efforts to ensure the memories of the Great East Japan Earthquake are not lost, the mayor’s opinoin on the past ten years of Sendai’s recovery, and future issues. The mayor commented, “Although ten years have already passed, I do not believe that reconstruction is finished,” and, “Natural disasters can happen to anyone,” and spoke about the importance of disaster training and teaching people about disaster prevention. 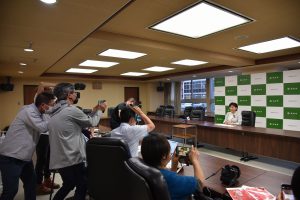 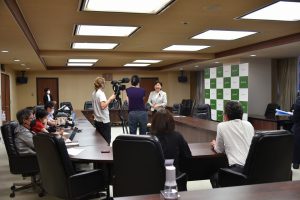