It was the first time in 28 years that FPCJ organized a press tour to the San-in region. A total of 14 correspondents from eight countries including China, UK, Germany, France, Spain, Switzerland, and Bangladesh, joined the tour to Shimane and Tottori Prefectures on March 27-28. 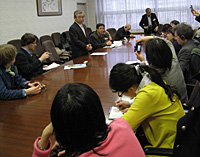 The tour first visited Matsue city, a historical city with Matsue Castle at its center, to enjoy a Horikawa river cruise. During the boat-ride, they looked at how the city cleaned up the polluted Horikawa river and started operating sightseeing cruises in the moat, and also their success employing the elderly. After visiting Matsue Castle, the tour had an interview with the Governor of Shimane, Mr. Zenbei Mizoguchi. The journalists' main interests were to find out the prefecture's financial aid for the "most serious global recession for over 100 years". The discussion also included various kinds of topics such as the tourism policy and measures related to the declining birthrate and the aging of society. 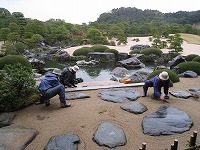 The next destination was the Adachi Museum of Art which has been hailed as the "Best Garden in Japan" out of 803 Japanese-style gardens for the last six years in a row, from 2003 to 2008 by the Journal of Japanese Gardening, a gardening magazine published in the United States. Director Takanori Adachi pointed out the reason for the museum's receiving this distinction is "the largely due to an intensive grooming and maintenance program that involves every single member of the museum's staff on a daily basis". At the end head Gardener Nobuhiko Kobayashi demonstrated his techniques of trimming trees.

On the second day, the tour started from the Uradome shoreline. The San-in shoreline, which is located near the Tottori sand dunes, is known for its dynamic cliffs eroded by the sea dubbed, the "ria shoreline". On the San-in shoreline with the national park along the Japan Sea, stretching from Tottori to Hyogo and Kyoto prefectures, rocks and strata formed by volcanic activity are visible. The park at its center was registered in "Japan Geopark Network (JGN)" in 2009 and the related prefectures, municipalities, and local private organizations have started working together to obtain the UNESCO-supported "Global Geopark" label in future. Before the group of journalists took a boat cruise around Uradome beach and islands, they had a briefing on the Geopark Network registration. 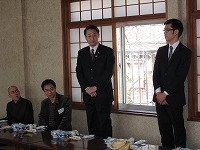 During the meeting with Mr. Shinji Hirai, Governor of Tottori Prefecture, the prefecture's financial aid for the global recession was again the hottest topic. Mr. Hirai introduced some examples of their support measures such as preferential treatment to career changers going into the agriculture, forestry and fishery industry or new agricultural development and promotion. Mr. Hirai also mentioned emergency drills conducted by the Prefecture to prepare for the launch of a North Korean rocket because he has been vigorously engaged in resolving the abduction issue by North Korea, which includes victims from Tottori Prefecture. 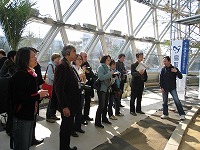 The Arid Land Research Center (ALRC), Tottori University, is the only academic research institute which has systematically studied the dryland issue in Japan. Mr. Atsushi Tsunekawa, Director/Professor of the center, explained the research on desertification and helping people in arid areas to develop sustainable agricultural practices around the world especially in China and Mongolia. After the briefing, the group inspected the Arid Land Dome, a dome-shaped glass greenhouse which has an environmental control system to simulate the climate of arid regions. 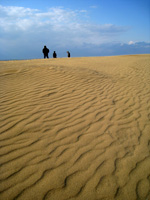 The last stop of the tour was Japan's world-famous Tottori sand dunes. The sand dunes spread 16 kilometers from east to west and 2 kilometers from north to south, and are the most popular destination for tourists in Tottori.

The tour visited the work site of Mr. Katsuhiko Chaen, the only professional sand sculptor in Japan as well as the producer of the forthcoming "World Sand Festival" in April this year. They enjoyed the beautiful patterns on the sand created by wind, called Fumon, wind ripples.