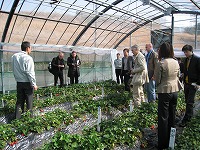 With the opening-up of Japan’s agricultural market and aging farmers, the environment surrounding Japan’s agriculture has been increasingly severe in recent years. However, Fukuoka prefecture views the overseas market as a good opportunity and is proactively trying to export its agricultural produce. Ten journalists from Germany, Italy, the UK, France, China, Korea and Singapore joined the tour and visited the prefecture to look into Fukuoka’s agriculture.

On March 16, the participants received a briefing on the export of Fukuoka’s agricultural produce from Mr. Hiroshi Watanabe, President of the Fukuoka Agricultural Products Trading Co. Ltd,.. This trading corporation was established jointly by the prefecture and the JA group last December.

Next the tour visited the Fukuoka Agricultural Research Center. The Amaou strawberry was developed at this center. The strawberry is now establishing a high-quality brand image in Asia. In addition to the development of the strawberry, the center also promotes the branding strategy at home and abroad and develops a new type of package which enables fresh strawberries to be exported without suffering damage during long distance transportation. The participants enthusiastically collected information and raised many questions. They also had an opportunity to taste Amaou and were impressed by its size, redness, and sweetness. 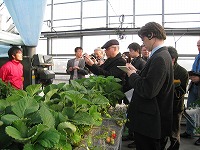 The participants also went to Yame City where the Amaou variety is grown on a large scale. They visited a packing center and Higuchi Noen, a market garden. Higuchi Noen introduced new farming facilities to reduce the physical burden on strawberry farmers. It also attempts to reduce the use of pesticides by making use of natural enemies so that more value is added to its products in the market. The participants listened carefully to a talk on the attractiveness of agriculture from the third young manager of this farm. They seemed impressed by his management philosophy and future vision. 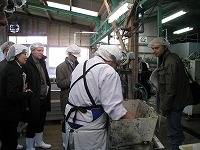 On March 17, the tour visited Ishibashiya, a Konnyaku maker, in Omuta City, close to the border with Kumamoto prefecture. Only thirteen people work at Ishibashiya, but thanks to the extensive efforts made by President Wataru Ishibashi, the company has successfully developed overseas markets and exports its konnyaku to eleven different countries.

The participants seemed struck by the passion expressed by the President towards the development of overseas markets even under the current economic crisis and asked many questions.

Then the tour visited Hoshino Seicha-en Co., Ltd. in Hoshino village which is famous nationwide for the production of high quality tea “Yame-cha”. The participants collected information on its undertakings in exporting its tea products, the development of new products that attract young people, and the financial situation of tea producers.

In the afternoon, the tour visited the Yame District Central Tea Production Plantation. This plantation is the largest in Fukuoka prefecture. The participants went up a hill which commanded an impressive view of the plantation.

Next the tour moved to an established sake brewery, Shinozaki Co., Ltd.. The corporation takes up the challenge of exporting Japanese koji malt culture and is trying to disseminate its products overseas. The participants had a chance to interview President Hiroyuki Shinozaki and his employees and taste their products.