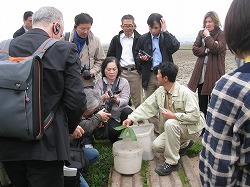 Known for its large production of food and its food self-sufficiency ratio of 63%, Niigata city will be the venue of the APEC Ministerial Meeting on Food Security in October this year. This press tour focused on the city's agriculture and its food supply, andten journalists from seven countries/regions including France, South Korea, China, Vietnam and Germany joined this tour. 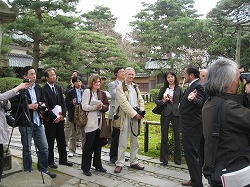 On the first day of the tour, the participating press listened to a briefing on Niigata's agriculture given by Mr. Nobutaka Nonaka, Director-General of the Agriculture, Forestry, and Fisheries Department, Niigata city. Then they interviewed Mr. Hirofumi Miyao, President of Miyao Farm which practices "natural agriculture," and visited his henhouses.

At Sato Foods Co., Ltd, its President, Mr. Isao Sato, talked to the press about its manufacturing and selling of packaged rice, and its supply of packaged rice in disaster areas in cooperation with local communities. Lastly, Niigata Governor Hirohiko Izumida and Niigata Mayor Akira Shinoda held a joint press conference, and talked to the press about the history, current situation and challenges of agriculture in Niigata, the significance of holding the APEC Ministerial Meeting on Food Security in Niigata, and other topics. 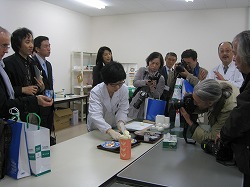 On the second day of the tour, the press visited the Niigata University Local Collaboration Food Science Center, which conducts research and development on "food in disasters", by utilizing the characteristics of Niigata where large earthquakes have occurred twice in the past. At the center, the press tasted "Rescue Foods" that are produced and sold by Foricafoods Corporation. This disaster food is warm and tasty just like normal meals even in disaster areas without lifelines.

Next, the press interviewed President President Occi Kiichiro of the "Cave D'occi Winery" who produces 100% home-grown Japanese wine. Lastly, the press visited Greens' Plant Maki Ltd. that produces and sells about 20 types of fresh herbs for cooking, mitsuba (trefoil, a chervil-like herb), and other leaf vegetables. Niigata is designated as a production center for mitsuba.