This June, Fukui Prefecture will be hosting the "2010 Japan APEC Energy Ministerial Meeting", which the energy ministers from 21 countries and regions, mainly from Asia Pacific, will be gathering to discuss global warming issues and energy conservation measures. In order to cover the prefectural approach to centralization of energy R&D/human resources in Asia, 14 journalists from the U.K., Taiwan, Germany, Vietnam, Korea, China, Bangladesh, France, Italy, and the UAE took part in the press tour. 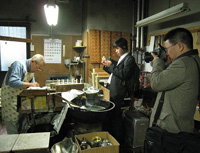 The participating journalists visited the prefectural energy R&D hub, Wakasa Wan Energy Research Center, and Monju, the prototype Fast Breeder Reactor (FBR), which is now set for restart after a gap of 15 years. They also heard from Governor Issei Nishikawa about the "Energy R&D Centralization Plan" as well as the prefectural industry, food and other items.

On the second day, the group of journalists learned about Japanese candles by visiting thehistorical Japanese candle maker, Kodaikokuya, which started business in the center of Fukui City in 1865. Mr. Ryuichiro Otsu, the executive director and seventh generation of Kodaikokuya, explained his attempts to make new-style Japanese candles while preserving the identity of tradition, and he gave the journalists a guided factory tour. At the Ichijodani Asakura Clan Ruins, which are the ruins of the castle town of the 16th century, the journalists heard about the excavation research which started in 1967 and its history. The journalists also enjoyed the local traditional dishes called "Asakura Zen" which was served by the group of local housewives who are trying to preserve the traditional recipe.

At the end of the tour they made quick visits to "Fukui Prefectural Dinosaur Museum", the leading-edge of dinosaur research in East Asia, and Maruoka Castle, which is famous as the oldest standing castle in Japan.