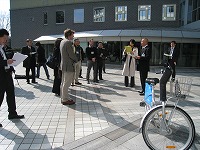 Toyama city was designated as an eco-model city by the Japanese Government in July 2008. The city has been actively trying to transform itself into a low carbon society. In order to collect information on the activities of the city, eleven journalists from the U.K., Taiwan, Germany, Singapore, Vietnam, Korea, China, France and the European Union participated in the press tour.
In this press tour, participating journalists heard from City Mayor Masashi Mori about the City’s plan to reduce CO2 emissions by the “Compact City” Strategy, centered on public transportation, collected various news items, including the eco-friendly tram, which is a loop route revived after 37 years, and also a center of the Strategy, a bike-sharing project which is the first to be fully implemented in Japan, and the test operation of a lithium ion bus, which can reduce CO2 emission by one third, compared with conventional buses which run on diesel fuel.