Kumamoto prefecture enjoys the rich natural environment of the Aso mountains, including the world’s biggest caldera, and its fertile soil and groundwater resources of good quality coming from the mountains’ rich subsoil water. A total of ten journalists from China, Taiwan, Hong Kong, Germany, Singapore, Spain, the UK, the ROK and Vietnam participated in the press tour to cover Kumamoto’s growing industries fostered by this rich natural environment. 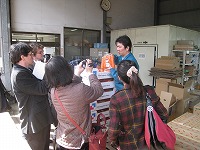 On the first day, the participants first visited MATSUMOTO Farm Co., Ltd, which is featuring its “transparent vegetables” under the conditions of increasing globalization and public demand for food safety by introducing safety management technology for production and stressing advanced management and disclosure of information. The participants had a detail explanation and a demonstration of the world’s first traceability system that the Farm has developed from Managing Director Takeshi Matsumoto, who played a key role in the introduction of the information management and disclosure system. This system allows us to trace all the production history and even to see on the Google map exactly in what field the products were cultivated. The participants asked Mr. Matsumoto about the discussion over possible participation in the TPP and the competition with exported products.

Then the participants covered “Suizenji Nori (Aphanothece sacrum),” whose name came from the fact that it was discovered in the spring-fed pond in the Suizenji Jojuen in Kumamoto City. Although at one time it was collected wild in and around Kumamoto prefecture, it is now designated as an endangered species because of the decline in the quality and quantity of water. Suizenji Nori now also receives enormous attention, because it was discovered to contain a totally new high-molecular material, “Sakuran.” Sakuran is able to retain water and absorb a specific rare metal and rare earth. The participants heard the features of “Sakuran” and the current state of its commercial use from President Shinichiro Kaneko of the Green Science Material Inc., a venture business in Kumamoto City which has established the technology to extract “Sakuran” from Suizenji Nori. They also visited Mr. Keijiro Tansei, the only culturist of Suizenji Nori in the prefecture, to see his farm and to touch on his wish to preserve and nurture this valuable product. 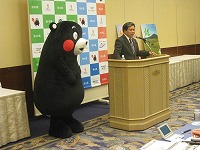 Then the participants attended the conference by Kumamoto Governor Ikuo Kabashima. The Q&A session was active, and because of his background as political scientist dealt with such topics as recent developments in the decentralization of power and local parties, and forecasts about the nationwide local elections. 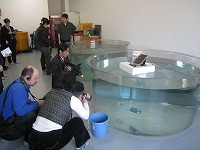 On the second day, the participants visited Big Bio Co., Ltd, which already had a high reputation abroad because of its river-purification products and other eco-friendly products that made best use of useful microorganisms in the natural world such as the BB bacteria (i.e. a microorganism group containing several kinds of bacillus microorganisms including the Bacillus subtilis var. natto, which converts soy beans into natto). The participants heard details of the company’s business development and products from President Keiko Sakamoto, who started the business as an “ordinary housewife.”

At Kumamoto Castle, the participants heard details of its restoration project, which started in fiscal 1998 and was scheduled to be completed in fiscal 2017. This project has also attracted a great deal of attention since part of the restoration cost has been donated by citizens through the “Hitokuchi Joshu Program.” Under the guidance of Mr. Junji Miyazaki, Kumamoto Castle Office, Kumamoto City, the participants toured the “Honmaru Goten Palace” whose restoration was completed last year, and tried for lunch “Honmaru Gozen,” a recreated meal of the Kumamoto clan’s culinary culture.

The participants also visited Fuji Electric Systems Co., Ltd., a representative of the solar-cell manufacturers located in Kumamoto prefecture, which aims to be a prefecture advanced in solar energy. In the solar cell market whose main stream had been the crystal type with glass substrates, the company successfully developed the thin, light and flexible film-type amorphous solar cell, “F WAVE” modules, by employing plastic films for substrates. The participants heard from Mr. Junji Fujimura, General Manager of the Kumamoto Factory, about “F WAVE” and a spring-roller-type mobile solar unit that the company co-launched with OS Co., Ltd., using the flexible amorphous solar cell, the first on the market.