Nine years have passed since the Great East Japan earthquake and TEPCO (Tokyo Electric Power Company) Fukushima Daiichi Nuclear Power Plant accident. This tour visited the towns of Tomioka, Okuma, Hirono, and Namie, which are located close to Fukushima Daiichi and are continuing along the difficult road to recovery, to cover people working on various initiatives to restore their communities, a school seeking to provide a global education to students who will be solving local issues in the future, and an effort to continue to provide information from the perspective of residents in different towns. The stops on this tour are also stops in the Hope Tourism being promoted by Fukushima Prefecture, and this tour provided an opportunity for the participating journalists to learn more about Hope Tourism.

A total of seven journalists participated in the tour, from media organizations based in Germany, France, Turkey, Sweden, China, and South Korea. They covered angles such as the state of reconstruction in Fukushima nine years after the disaster, hopes for the “Recovery Olympics” which would be starting in five months (when the tour was held), and what lessons Fukushima’s experience can provide to help deal with the recent issue of the novel coronavirus COVID-19.

*This tour was sponsored by Fukushima Prefecture, and planned and operated by the FPCJ. For more information on tour stops, click here for the tour notice.

*This press tour was held before the March 24 announcement of the delay of the 2020 Tokyo Olympic and Paralympic Games.

Fukushima Prefecture, the only place in the world to have experienced an earthquake, tsunami, and nuclear accident all at once, is now engaging in Hope Tourism. Participants see the real Fukushima (its light and darkness), speak with Fukushima residents working towards recovery, and think as something that personally affects them about how to apply the lessons from the disaster to the future. A member of the Fukushima Prefecture Tourism Section explained the intention behind the experiential, educational journey of Hope Tourism, the results so far, and an overview of the current tour.

The number of Hope Tourism tours in 2017 was 20 (including one non-Japanese), and this number increased to 50 (4) in 2018, with 54 (10) tours as of February this year. The journalists asked questions including what kind of non-Japanese participants joined the tours. 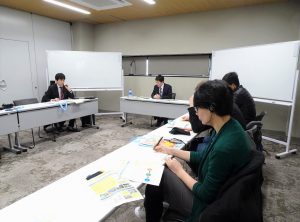 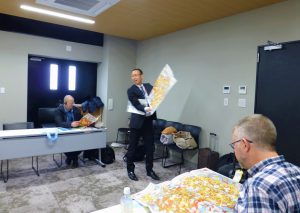 Operated by the private organization Futaba-gun Future Meeting, the Futaba Information Center is a facility with the goal of providing information from the perspective of residents from all eight of the municipalities that compose Futaba-gun. The tour visited and spoke with Mr. Hirayama, its representative. After graduating from a local high school, Mr. Hirayama moved to Tokyo and worked in the music industry for over 20 years before returning home to Tomioka in Futaba-gun to take over running his family’s hotel. Two years later, the Great East Japan earthquake and nuclear accident occurred. Five months after the accident, Mr. Hirayama he put up a banner reading “Tomioka will not lose!” on a pedestrian bridge by the national highway, in front of a live camera operated by NTT, and became a topic of conversation throughout Japan. Mr. Hirayama continued to volunteer and provide support for former residents and returnees to the area, doing whatever he could to help, and having heard this the journalists asked questions such as “What kind of government support is there for residents who return from evacuation, such as for their homes and living costs?”

The journalists then looked around the Futaba Information Center, which has ample displays of information and specialty products from each of the eight municipalities, as well as taking pictures of the “Tomioka will not lose!” banner and Mr. Hirayama posing in front of his hotel nearby at the request of the journalists. 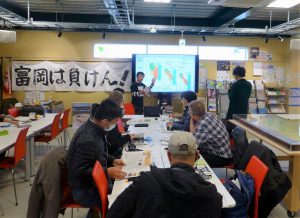 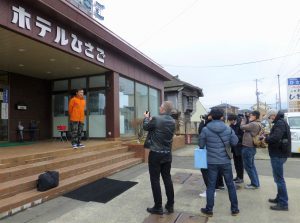 3. Recovery from a Difficult-to-Return Zone in Okuma, Location of the Fukushima Daichi Nuclear Power Plant

After the nuclear accident, the entirety of Okuma, where the Fukushima Daichi plant is located, was designated as an evacuation area, and its over 11000 residents had no choice but to evacuate elsewhere within the prefecture and throughout Japan. In April 2019, eight years after the accident, the evacuation order was lifted from part of the town, and the long process of recovery has begun while facing the reality of the decommissioning likely to take 30 or 40 years.

The tour visited Ogawara, the base for the reconstruction, where the new town hall for Okuma opened in May 2019, and received an explanation from Director-General Takada of Okuma Machizukuri Public Corporation, which is carrying out the reconstruction in that district, about the situation since the disaster. The tour was then guided by Mr. Takada around Ogawara, where over 50 new public housing residences have been built. The journalists were impressed with the newly built townscape, but noticing how almost no one was in the area, one commented, “Will former residents actually return? I would like to interview some people who have come back.” The tour then returned to the town hall, and there was a Q&A session which officials from Okuma participated in as well. 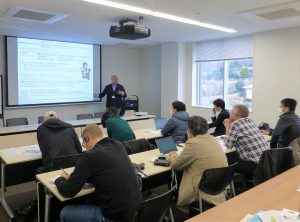 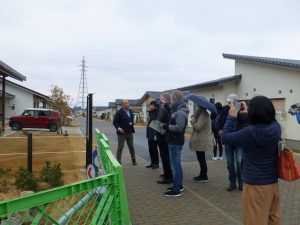 At the end of the first day of the tour, the group met with Mr. Akihiro Yoshikawa, a former TEPCO employee who was working at Fukushima Daini Nuclear Power Plant at the time of the earthquake and quit in June 2012 to start AFW (Appreciate Fukushima Workers). Displaying the Fukushima Daiichi diorama he made with the hopes of “making the nuclear accident something society as a whole can think about,” he spoke about his complex feelings as both a local resident and a former TEPCO employee. He also explained how as someone who worked in a nuclear power plant, he felt a responsibility to connect society and this place, and to teach the next generation about it as well.

The journalists asked questions including “What kind of explanations do you usually give using this diorama” and “What do you think about the environmental impact of releasing water contaminated by the nuclear accident into the ocean after processing it?” Asked to give a message to the people of Wuhan, which became ground zero for the coronavirus, Mr. Yoshikawa commented that it was similar to the nuclear accident in so much as it was difficult to tell what information was accurate, and that it would likely take time for problems such as prejudice and discrimination to end. 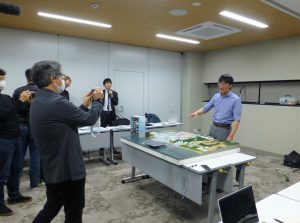 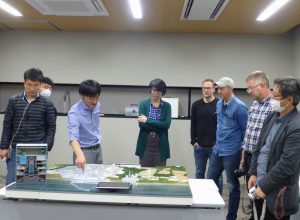 5. Fukushima Prefectural Futaba Mirai Gakuen Junior High School and High School, Education with a Global Perspective for Students Who Will Carry Out the Recovery

The tour visited Futaba Mirai Gakuen (Futaba Future School), which opened in Hirono in April 2015 (the junior high school opened in April 2019) as a symbol of the rebirth of education in Futaba-gun, combining five prefectural schools which closed after the earthquake. The high school was designated by the Ministry of Education, Culture, Sports, Science and Technology (MEXT) as the first Super Global High School in Fukushima Prefecture when it opened. Vice Principal Ippei Nango explained how the school came to be founded, the type of school it aims to become, and the unique features of its education. The high school students research recovery issues during their first year, and consider and implement solutions to those issues in their second and third years in a practical education style, which the journalists showed significant interest in.

The journalists then joined in on an English class for first year high school students, with one or two journalists joining groups of four or five students to ask them about their daily life, their experiences in the disaster, and their thoughts on the recovery. Having heard that two students of the school had been chosen to participate in the Olympic torch relay, as the No. 1 world ranking badminton player and Olympic gold medal hopeful Kento Momota is a graduate (of the former Tomioka Junior High School and High School), the journalists asked students about their hopes for the Olympics. 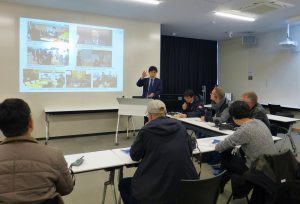 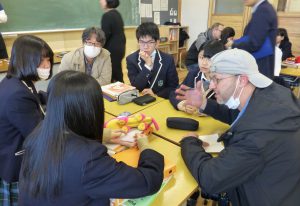 6. Namie, Passing on the Memories of the Disaster (Ukedo Elementary School, Ohirayama Cemetery)

The tour visited the town of Namie, which had its evacuation order lifted three years ago except for areas designated as difficult-to-return zones. Although Namie had a population of over 20,000 before the earthquake, less than 10% of residents have returned so far. Led by local guide Mr. Wataru Izumi, the tour saw the former building of Ukedo Elementary School, approximately 300 meters from the coast, and the journalists took ample pictures of this site demonstrating the danger of tsunami. After hearing how the students and staff who were in the school when the earthquake hit helped each out and ran to high ground 1.5 kilometers away, with all of them surviving, the tour went to Ohirayama Cemetery, the place they had evacuated to. From the cemetery, Fukushima Daiichi can be seen undergoing decommissioning in the distance, and In front of a memorial with the names of the 182 residents who lost their lives in the disaster, Mr. Izumi read the inscription on the memorial stating, “We must not forget that disasters will definitely happen again,” as the journalists listened quietly. 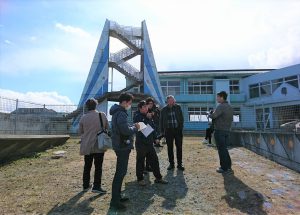 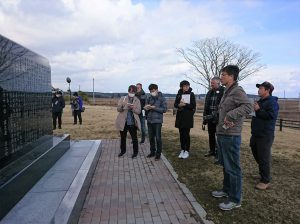 7. An NPO Working to Make a Town of Flowers

As part of its recovery, Namie set the goal of becoming a “town of flowers” as a center for flower production. On the final stop of the tour, the journalists spoke with Mr. Hiroshi Kawamura, the director of the NPO Jin, which has been growing high-quality lisianthus and other flowers in an effort to ensure returning residents can have a stable life. Before the disaster, Mr. Kawamura ran a business providing care services and rehabilitation for seniors and people with disabilities. After the disaster, he tried growing vegetables in a garden by his office, but they were found to have radioactivity above permitted levels so he gave up on selling them. He then started growing flowers, which are not as affected by negative perceptions and which are profitable.

In a Q&A session which two women working at Jin participated in, the journalists asked questions from a variety of angles, including what personal experiences they had during the disaster, hopes for their life going forward, the necessity of nuclear power plants, and their thoughts on the Olympics. Hearing that there were plans to use lisianthus grown by Jin in the victory bouquets giving to Olympic medalists, the journalists took pictures of Mr. Kawamura and the staff holding lisianthus bouquets. 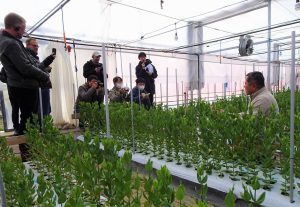 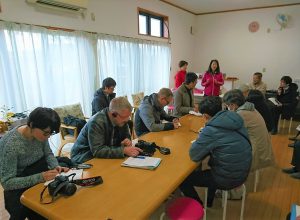 (The Recovery Olympics and Fukushima’s Recovery)

As this tour was held five months before the Tokyo Olympics are set to begin (when the tour was held), the journalists were most interested in these questions they asked at almost all the stops on the tour: “Does holding the Olympics benefit regional areas? What do you hope for from the Recovery Olympics?” The general response from the people of Fukushima was as follows, demonstrating their conflicted emotions: “Personally, I would like to cheer for the participating athletes and be inspired by them. I am grateful that holding the Olympics is causing people to pay attention to disaster-affected areas and increasing their understanding of the current station. However, it will be a problem if people think the recovery has finished just because the Recovery Olympics have ended. I would like people to understand that the process of recovery will continue long after the Olympics.”

◆Below are some of the reporting produced by the journalists based on this press tour.