With the Tokyo 2020 Olympic and Paralympic Games coming up next year, this tour visited SMEs throughout Tokyo’s 23 wards which have received various Brave Management Awards from the Tokyo Chamber of Commerce and Industry. The tour saw various unique SMEs and covered their innovative efforts to aim for 100 years from their founding, as well as strategies for surviving in the age of globalization using advanced skills. A total of 11 journalists participated in this tour, from media located in China, Hong Kong, Hong Kong/Macau, Singapore, Taiwan, and Vietnam.

*This press tour was sponsored by the Tokyo Chamber of Commerce and Industry, and planned and operated by Foreign Press Center Japan.

*For details on the tour, click here for the original notice.

【Tokyo Chamber of Commerce and Industry】

The tour visited the Tokyo Chamber of Commerce and Industry in their new building which they moved into in November 2018. After hearing a comparison of the roles of SMEs and long-lived companies over a hundred years old in different countries, and the basic philosophy of TCCI’s first chairman Eiichi Shibusawa, there was a briefing on the SMEs involved in the tour. The tour then saw the Tokyo 2020 PR Station exhibition booth on the first floor of the building, and received an explanation of it from staff. The journalists took photos and videos of the displays, and held TV interviews with TCCI members. The journalist from Singapore asked questions about the increase in consumption tax. 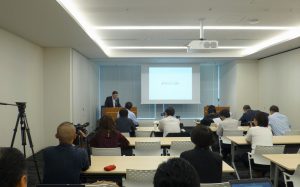 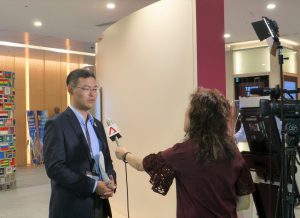 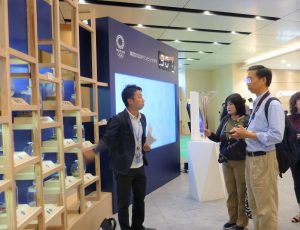 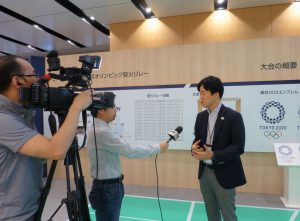 The tour visited Harada Sakan, which has a showroom and training space in its head office in Bunkyo Ward, and learned about the company’s initiatives to train and promote long-term employment of youths and women, as well as about sakan plastering techniques. Third-generation company president Mr. Muneaki Harada, who took over the business from his father when in his 30s, explained what countries the materials they use come from (China, Taiwan, etc.), examples of where Harada Sakan’s skills have been used, and the modeling method of training used in which rookies watch videos of veteran plasterers and emulate them. In response to a question from the journalists about what benefits there were to hiring 11 women, Mr. Harada commented that even though in the past it was thought only men could do this work, at individual job sites they can split up with the women doing the delicate finishing work, while the men do the work they are more suited for. The tour then saw the workspace on the first floor and training space on the second floor. On the second floor, a 20-year-old new female employee who was previously part of the Japanese Self-Defense Forces performed a demonstration of sakan plastering, and journalists also had the chance to use trowels and try sakan for the first time. The journalists asked younger employees about their sense of fulfillment from the work and about their future. 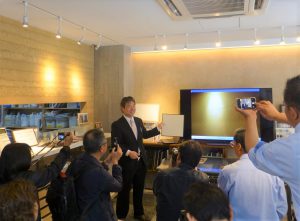 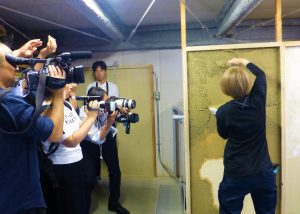 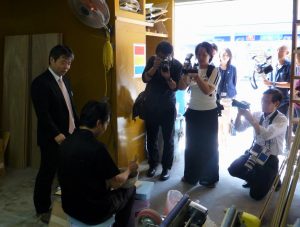 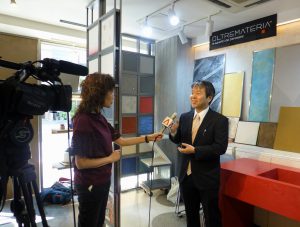 On the bus heading towards Shinya, a restaurant founded 139 years ago in Asakusa, Taito Ward, sixth-generation company president Mr. Fumihiko Sumiyoshi provided a tour of Ueno and Asakusa while explaining the history of sukiyaki since the Meiji period, Japanese food culture (stewing and fermentation), and the difference between beef flavor and the melting point of fat. Mr. Sumiyoshi commented, “We are selling memories,” and explained, “I would like to have our business be a place families come again and again, over the generations.” At the restaurant, the journalists tried sukiyaki made with carefully selected “tekisashi” (suitably marbled) beef and seasonal vegetables, while filming and photographing the ingredients and the staff making the sukiyaki. During the interview with Mr. Sumiyoshi after the meal, the journalists asked questions about how long and with what method the beef was aged, the history of eating beef in Japan, the number of tourists that went to the restaurant, and preparations for and impact of the consumption tax increase. 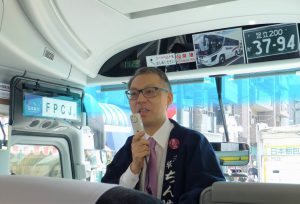 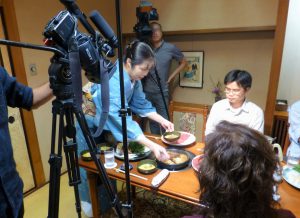 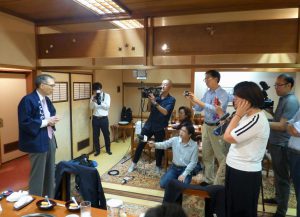 Located near JR Omori Station in Ota Ward, Aioi Systems is a fabless manufacturer (a business with no factory which outsources its production) involved in the design, development, manufacture, and sales of electronic equipment. With a focus on the cutting-edge systems developed by the company, the tour heard about Aioi Systems’ history and how it changed along with the logistics industry, and about its main product, the Digital Picking System (DPS), which has a 70% global market share and is used in logistics centers. The president and founder, Mr. Kiyoshi Tada, explained about changing ideas and expanding the business into the logistics industries, expansion into countries including China, and contributing to less paper use with smartcards. The journalists were surprised at the breadth of ways smartcards could be used. In the showroom located in the building, displaying systems developed by the company, the journalists learned about the DPS and applying its technology to projection mapping, and Hangar Picking using sensors, and filmed and photographed demonstrations of various systems with the latest features. 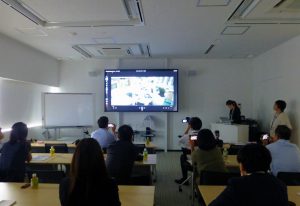 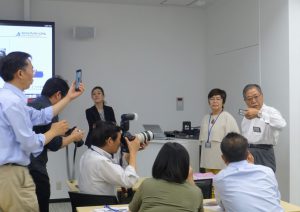 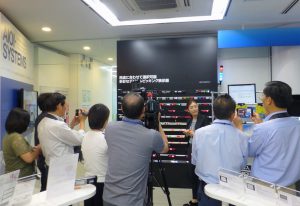 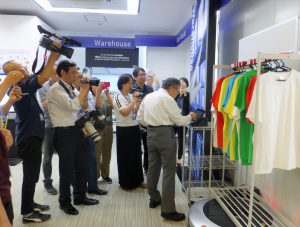 The tour visited Nishio Glass Mirror, with their factory located in Ota Ward, and heard from third-generation representative director Mr. Tomoyuki Nishio about establishing the Nishio brand, development of new demand after the 2008 global financial crisis, participating in an academic-industrial collaboration project, and a training policy to ensure at least three people know each particular skill. The company holds paid factory tours and workshops (industrial tourism), and he explained more women participate than men, showing the high interest women have in artisanship, which the journalists agreed with. The journalists asked about the connection between training staff and making goods, and the number of female artisans in the company. In the glasswork workspace, the journalists were enthralled as they filmed and photographed a demonstration of a technique to precisely attach pieces of glass, which has been used in showcases purchased by overseas jewelry stores, carried out by Mr. Ito, a 67-year-old man with the title of Tokyo Meister. The journalists asked about whether he was concerned over the decreasing number of artisans, and he replied, “I am concerned, and so I intend to pass on all my techniques to young people who decide they want to become artisans.” Later, there were questions for Mr. Nishio about how the decision was made to make showcases, and about the demand for glass products. When asked about the impact of the consumption tax increase, Mr. Nishio replied, “We intend to work together as a company in order to make sure our customers will still be satisfied, even if the cost is higher.” 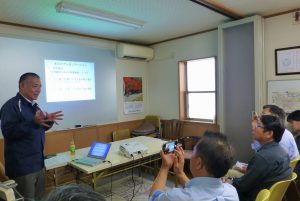 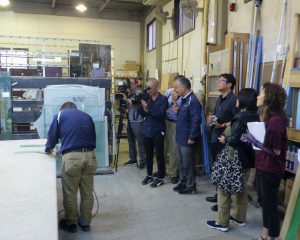 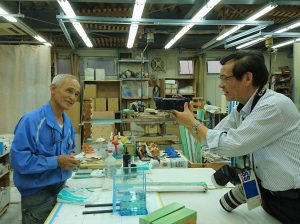 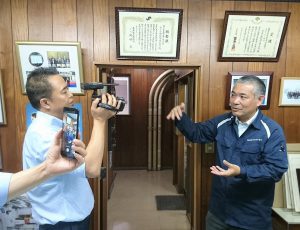 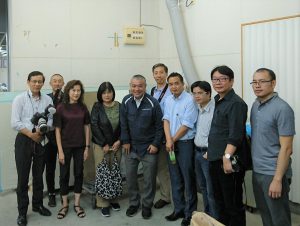