The FPCJ held a press tour to the Sanriku Coast of Iwate, where they are still working hard on reconstruction from the 2011 Great East Japan Earthquake, and which is home to Kamaishi, one of the venues for the 2019 Rugby World Cup. The participating journalists covered the progress of reconstruction, efforts to preserve the memories and teach the lessons of the tsunami both within Japan and around the world, the role sports can play in reconstruction, and initiatives to stimulate the region and build a new Sanriku. A total of seven journalists participated in the tour, from media organizations in Bangladesh, Denmark, Germany, Switzerland, Taiwan, and the US, as well as from an English-language web portal in Japan.

*This tour was organized by the Sanriku Disaster Prevention and Recovery Project 2019 Executive Committee and planned and operated by the FPCJ.

Inochi o Tsunagu Miraikan: A Facility to Tell the Story of the Tsunami

Ms. Nodoka Kikuchi, who experienced the “Miracle of Kamaishi” evacuation from the tsunami as a third-year student at Kamaishi East Junior High School, explained the damage to Kamaishi from the tsunami, the disaster-prevention education children in Kamaishi received even before the disaster, and the evacuation that she herself was a part of. The journalists asked Ms. Kikuchi a number of questions about the evacuation of the children that she was involved in, and many of them commented later about how valuable it was to be able to speak with her directly about her experience. 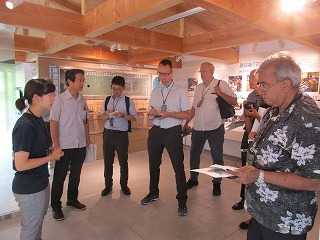 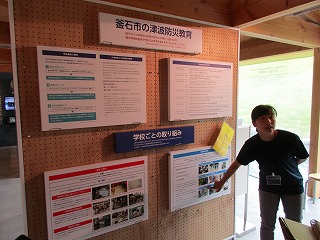 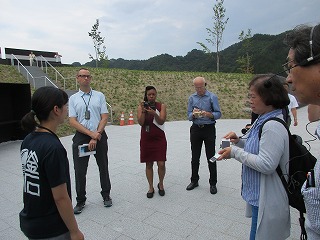 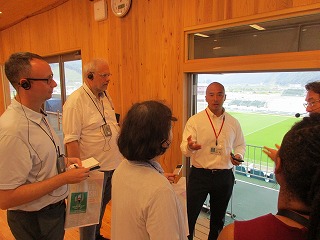 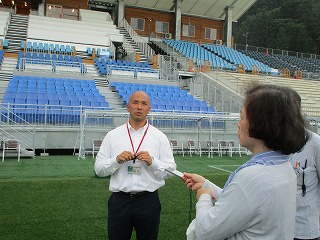 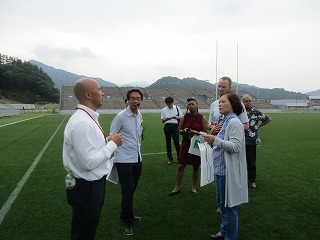 The tour visited the ryokan [traditional inn] Horaikan, located by Nebama Beach, and heard from the okami [woman manager] Ms. Akiko Iwasaki about how she was swallowed by the tsunami while evacuating to higher ground with local residents, as well as about efforts to bring the Rugby World Cup to Kamaishi and to promote Nebama Beach. They also heard from Ms. Eri Hosoe, who moved to Kamaishi from Tokyo and is working along with Ms. Iwasaki, about plans to turn Nebama Beach into a place where people from around the world can learn about disaster education, along with other plans to stimulate the area. The journalists asked Ms. Iwasaki about her experiences during the disaster, as well as asking about how Nebama residents chose to rebuild the seawall to a height where the ocean can still be seen, as it was before the tsunami. 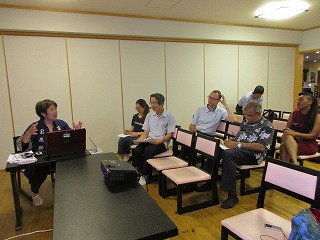 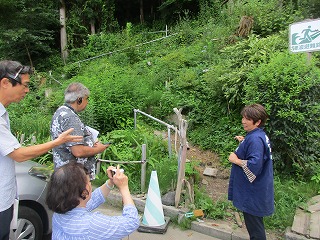 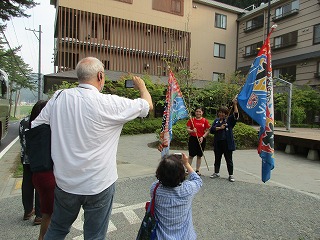 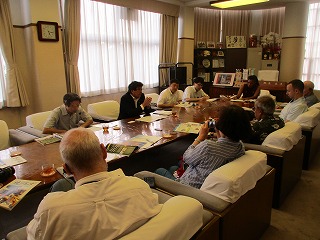 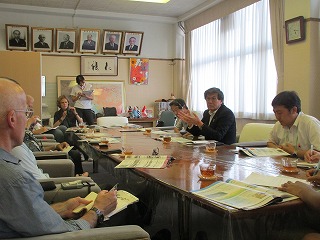 Sanriku Railway Co., Ltd.
The tour visited the head offices in Miyako of Sanriku Railway, which was badly damaged in the Great East Japan Earthquake, and interviewed company president Mr. Ichiro Nakamura. Mr. Nakamura explained Sanriku Railway’s recovery, and commented, “As well as working as transportation for all the local residents, I would like to have many tourists from Japan and abroad ride our trains to help stimulate the local economy.” The journalists asked questions about overseas support for the reconstruction of the railway and initiatives for increasing the number of passengers, and rode the line for part of the way between Miyako and Kamaishi, which reopened for the first time since the disaster in March this year, and filmed and photographed the scenery from the windows. 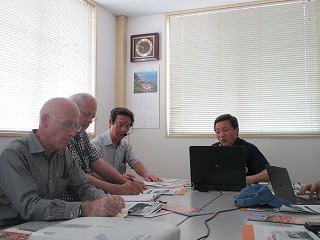 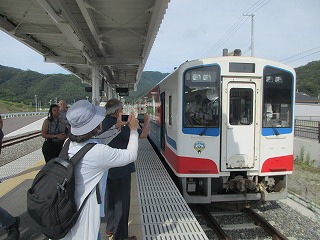 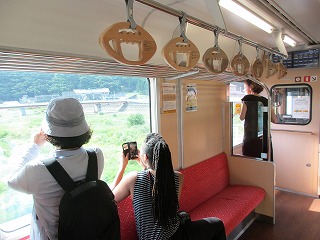 Kyowa Fishery Co., Ltd.
The tour visited the plant of Kyowa Fishery, a seafood processing company located in Miyako, and heard from its young president Mr. Ryota Suzuki about the company’s recover after the disaster, as well as seeing ika somen [squid noodles] and other products being made. Since the disaster, Mr. Suzuki has called himself the “Squid Prince” and played a leading role in promoting Miyako’s fishery industry in Japan and overseas. The journalists asked about the company’s product lineup, plans for expanding the business overseas, and efforts to deal with the labor shortage, and were very excited to learn that the company was selling the company’s popular fried cod as fish and chips at Kamaishi’s Rugby World Cup venue. 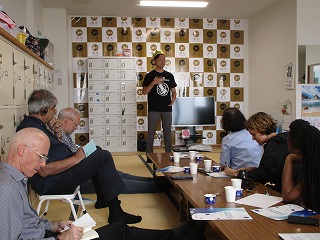 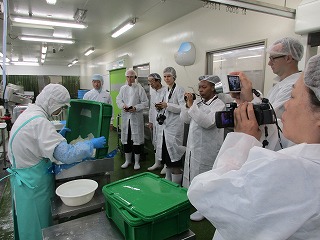 Corporate Impact Co., Ltd.
The tour visited the office of Corporate Impact in Otsuchi, where scanned documents from Tokyo and around Japan are proofread and checked, and spoke with company president Ms. Kumiko Fukuda. She runs an IT company in Tokyo, and after the disaster transferred part of her company’s work to Otsuchi to create employment in her hometown of Otsuchi. Currently, the Otsuchi office employs 15 people, and there are plans to increase this number. As an IT company, rare in the areas most affected by the disaster, the company is helping to incorporate IT into Sanriku’s fishery industry. The tour heard an explanation of the remote monitoring system the company developed for ocean fish farms, and had a chance to sample some fresh Otsuchi seafood. 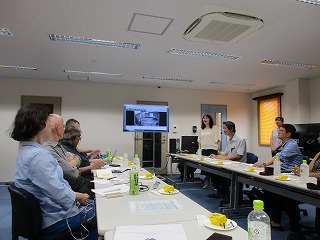 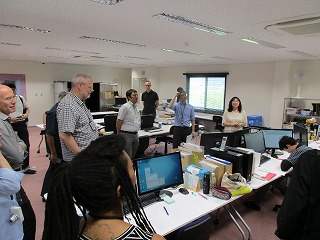 The tour heard about the efforts of the students in the Otsuchi High School Reconstruction club to pass on the lessons of the disaster to future generations, and saw a demonstration of the club’s fixed-point observation in the town meant to leave a photographic record of the reconstruction. The journalists asked the students about whether they wanted to stay in Otsuchi in the future, their thoughts on Kamaishi hosting Rugby World Cup games, and what Otsuchi had that would attract foreign tourists, as well as questions such as “As people living in a disaster-affected area, do you feel people in places like Tokyo have forgotten about you” and “By the time you become adults, do you think Japanese society will be rid of sexism?” 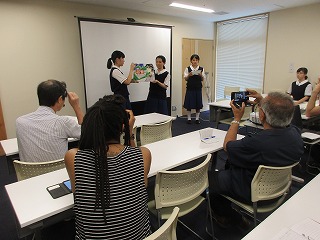 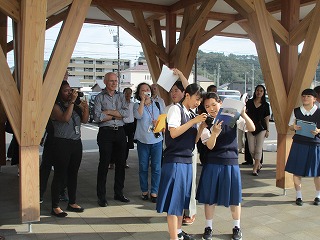 August 12 "Kamaishi: True Japanese hospitality, and some of the freshest seafood around"