This press tour was held ahead of the G20 Labour and Employment Ministers’ Meeting which will be held in Matsuyama, Ehime in September 2019. Six journalists participated in the tour, from China, Hong Kong, India, South Korea, and Taiwan. This tour covered the development of Mikan Fish combining the local specialty of mikan (satsuma mandarin) with aquafarming techniques, the cultivation of lemons on the island of Iwagijima in the Seto Inland Sea, and a company producing unique products by combining new techniques with traditional methods to make washi (Japanese paper) by hand.

*Click here for further details on the stops on this tour.

As the amount of unused farmland grows with the increasing average age of agricultural workers, Telefarm considered the cultivation process for agricultural products and created a new service connecting producers and consumers over the internet as a way to support the future of regional agriculture. From the website, Ragri, operated as a subsidiary of Rakuten, consumers choose a producer and crop, and can see how it is growing over the internet until the freshly-harvested product is delivered to them. In addition to this service having the benefit of enabling consumers to buy safe products at the optimal timing from producers whose faces they can see, its concept also places value on agriculture itself and creates a system enabling a stable income for producers. The journalists experienced agricultural tasks such as watering zucchinis through a smartphone app, and after a briefing on the system, asked a young employee who grows organic crops why he decided to work in agriculture and join Telefarm. Other questions were about the amount of time spent interacting with customers online as opposed to working in the fields, and the average amount of farmland used per customer. 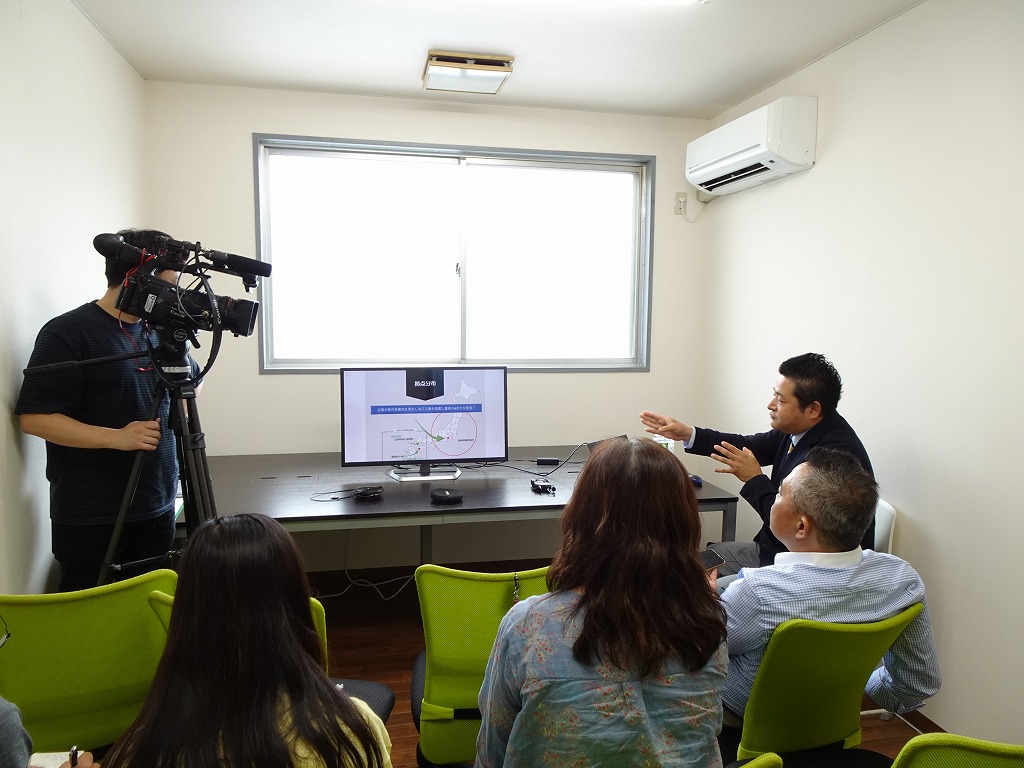 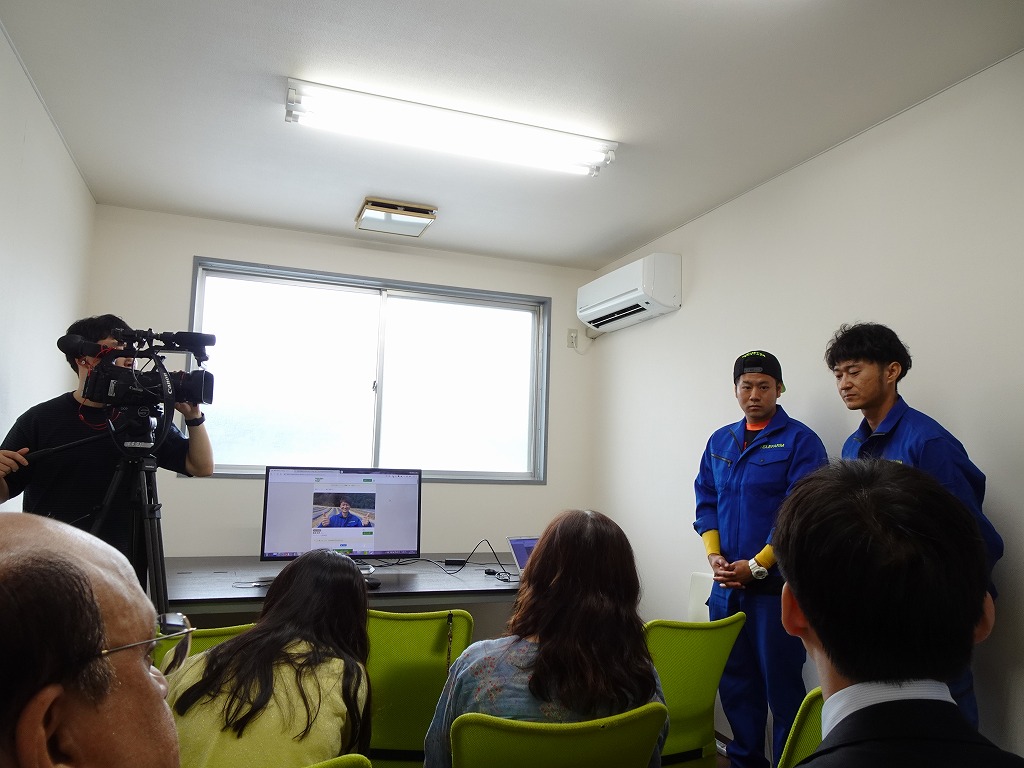 Ehime Prefecture is No. 1 in Japan for both mikan production and aquafarming of fish. The tour heard from Uwajima Project, which succeeded at developing a way to farm fish such as sea bream and yellowtail without a fishy smell and selling these Mikan Fish in Japan and abroad, and Nakata Suisan, which farms the Mikan Fish. After adding mikan to the feed when trying to farm fish with quality texture that would last, they noticed it acquired a delicate mikan scent and flavor and so Mikan Fish was made, which even people who do not like fish can eat, and it began to be sold in department stores and at sushi restaurants. After trying Mikan Sea Bream, the tour took a bought out to see the net pens where the fish are farmed. The journalists asked a variety of questions, including about the annual amount of fish produced, difficulties when first developing Mikan Fish, the ratio of mikan mixed into the feed, whether fish had a sense of taste, whether Mikan Fish had competition, and if they were thinking of other combinations aside from mikan. 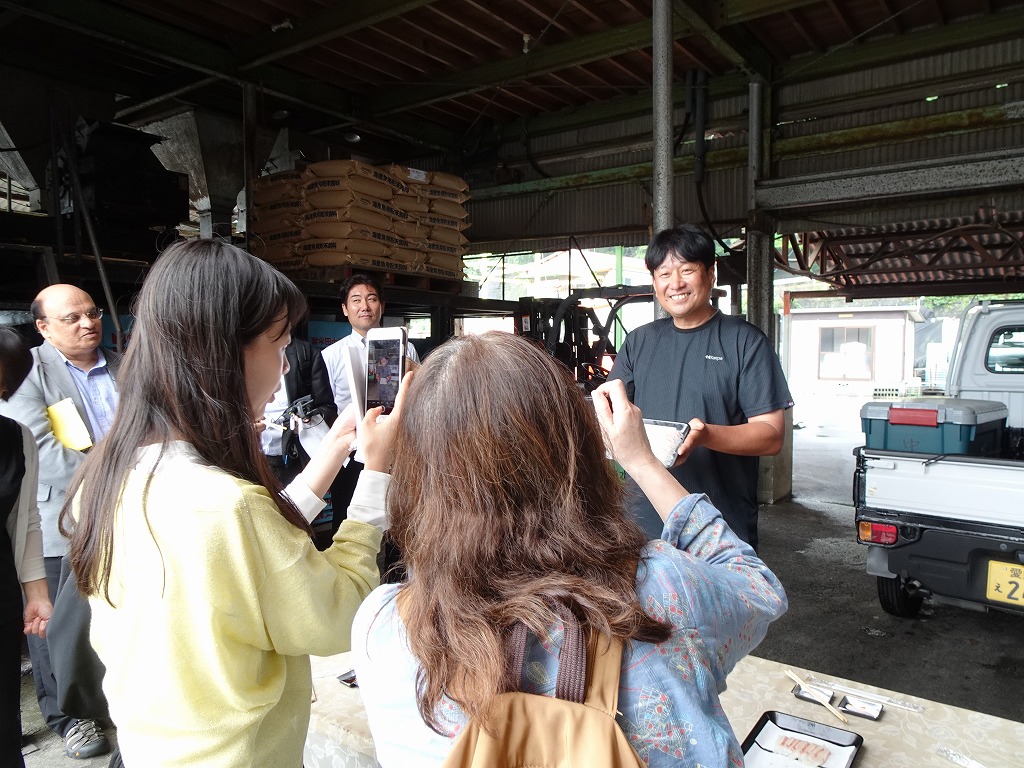 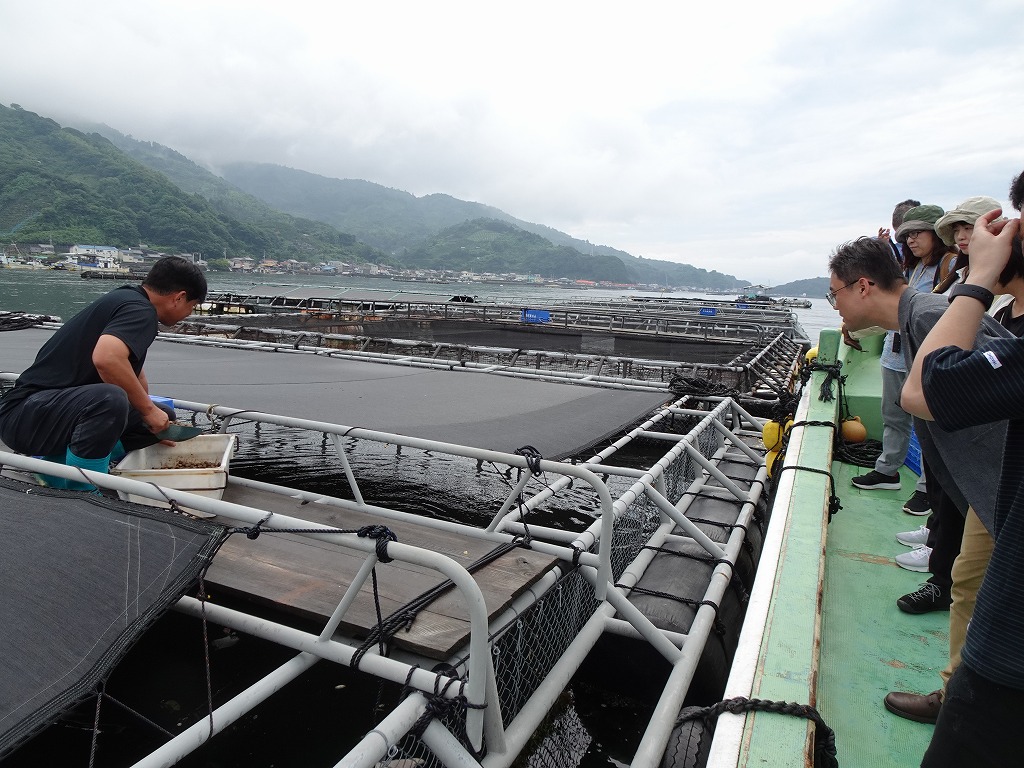 The tour visited Ikazaki Shachu, which combined the traditional craft of Ikazaki (Ozu) washi (which has been made in Uchiko-cho Ikazaki for over 300 years) with French gilding techniques using metallic foil to create unique products including wallpapers and lights. Ikazaki Shachu President Hiroyuki Saito worked as a systems engineer in Tokyo before moving to Uchiko-cho Ikazaki after getting married, and with some influence from his father-in-law who was working on finding youth to join the washi industry, he learned about gilding techniques from a French designer who lived in Uchiko-cho for around two years at that time, and created “Ikazaki Gilding Washi.” In addition to hearing about this, the journalists saw the gilding process and saw handmade washi being made in the workshop. The journalists asked questions about how French gilding techniques were different from Japanese gilding, whether mass production was possible, the types of colors and characteristics of dyes, how many veteran artisans had been working their long-term, and their ages. 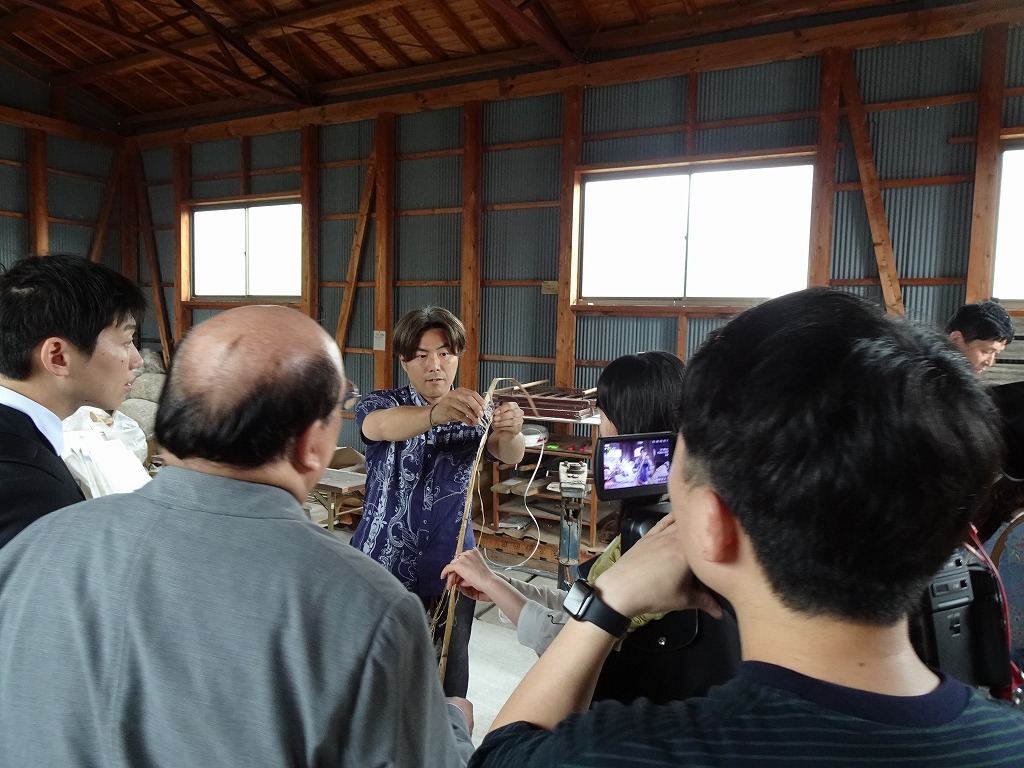 The tour took a ferry to Iwagijima in the Seto Inland Sea, which is known as the “island of green lemons,” and met with lemon farmer Mr. Yoshitomi Waki, who chose the name “Aoi [blue/green] Lemon” and helped stimulate the island’s economy. The tour heard about the history of lemons in Japan after they were first imported in the Meiji period; the characteristics of lemons, which are susceptible to disease and have thorns on their trees; the preferred cultivar of the island carefully selected by Mr. Waki considering these factors; efforts to grow lemons in greenhouses so they could be harvested year-round; how 3,000 lemon trees were distributed to the residents of Iwagi Mura (in 1974) in an effort to become a lemon-producing area, and their sales method targeting individual customers. The journalists asked questions about whether there was a facility researching lemon diseases nearby, and what kind of lemons he would like to grow in the future. 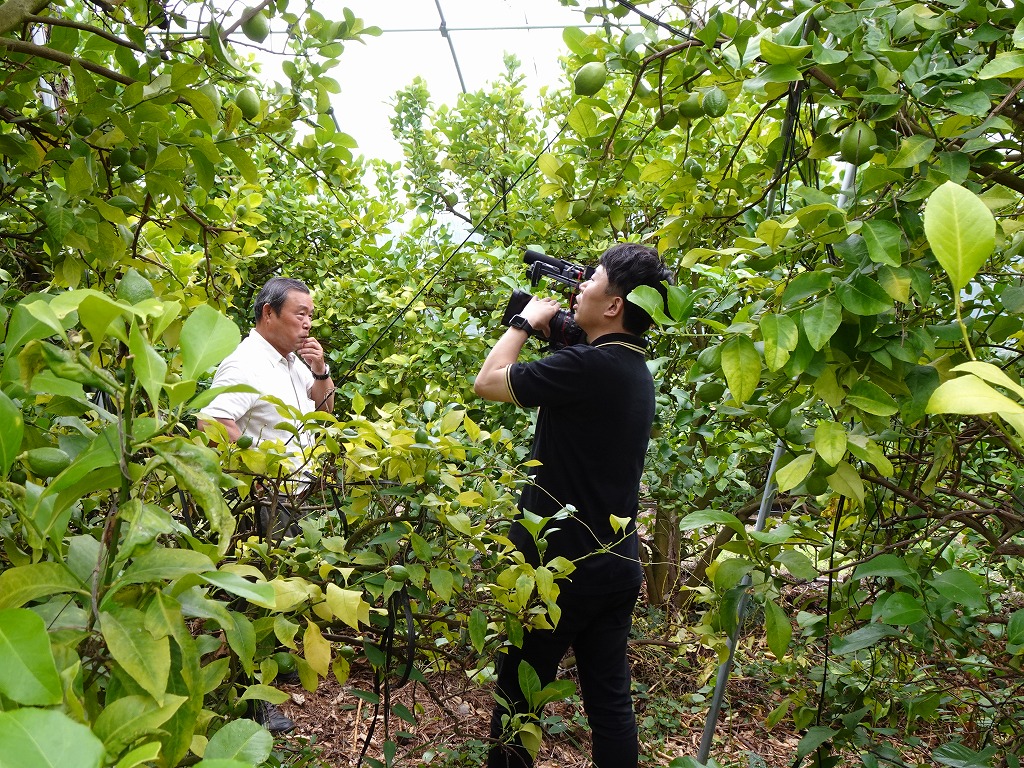 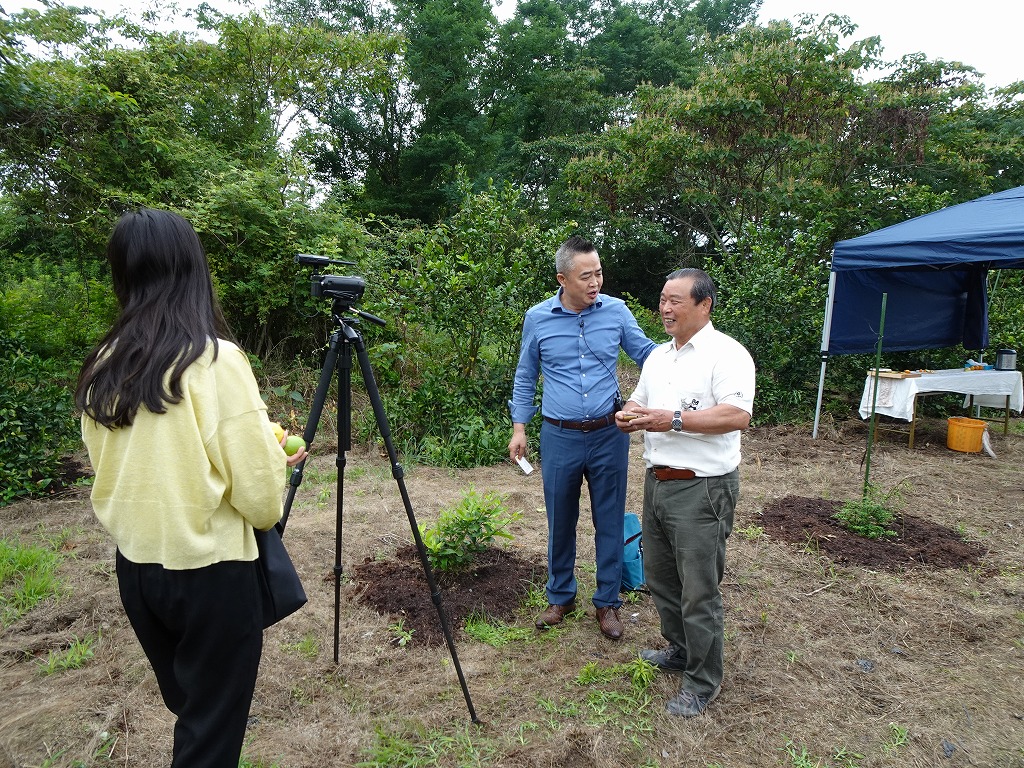 From the director of Iwagi Bussan Center, the tour heard about how when they started growing lemons on Iwagijima 40 years ago, imported lemons artificially ripened with ethylene gas were common, so Iwagijima’s green lemons were sold by mail and telephone as “fresh, domestically-grown lemons with no preservatives that you can even eat the peel of after rinsing,” and then gained further trust from customers with sales by a major department store in Tokyo. He introduced products such as lemon oil made from the peel and lemon juice, and marmalade made using the peel.

From the owner of Matsuura Farm, which makes Lemon Pork, the tour heard about how the leftovers from squeezing lemons were mixed into the pigs’ feed and the pigs’ manure used as organic fertilizer in the fields in order to establish an agricultural cycle. The journalists asked questions such as how the pigs ate the lemon, whether they ate the lemon right away at first, and what kind of changes occurred in the fat of the pigs. After the interview, the group went to the processing plant and saw workers peeling lemons, and heard about bottling and other steps of the process. “Debeso” means “nosy” in the Iwagi dialect, and the tour visited the farm restaurant Debeso Obachan no Mise, run by energetic women living on the island, for lunch. The owner, Ms. Nishimura, had wanted to open a restaurant so much she used to buy lottery tickets for that goal. She explained how her restaurant was selected as part of the first wave of the Ehime Dream Proposal system (made to encourage development taking advantage of local character by relaxing regulations under prefectural authority and providing other support), and the tour had the opportunity to try lemon kaiseki meals made using the island’s lemons, in a friendly atmosphere. 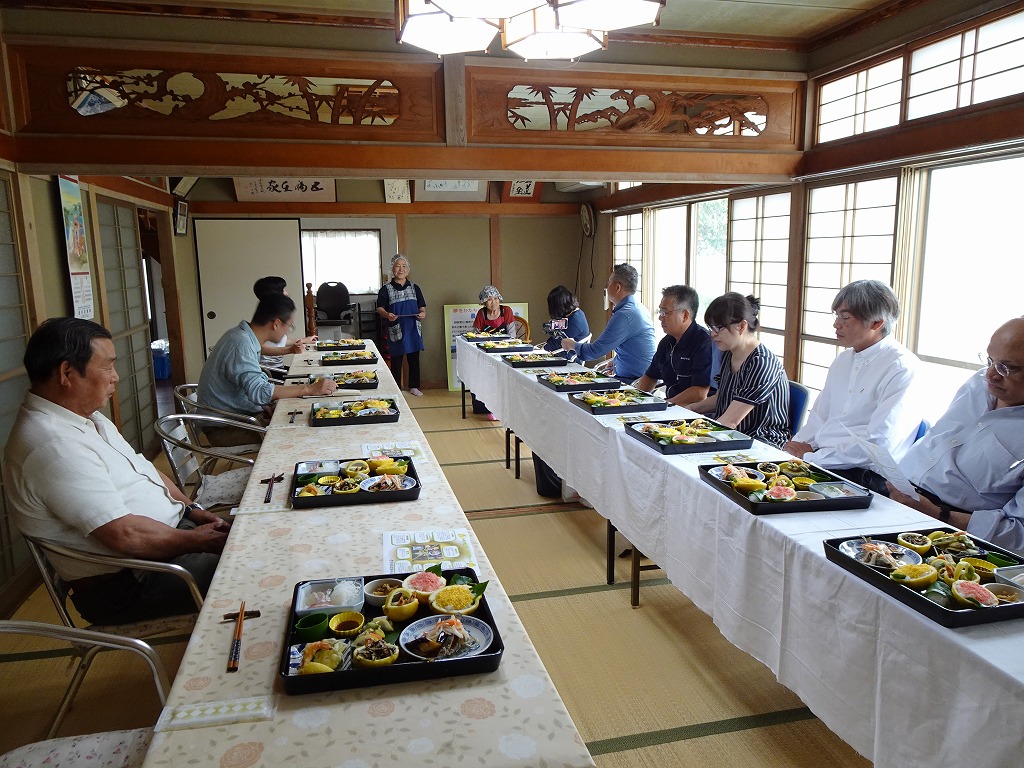 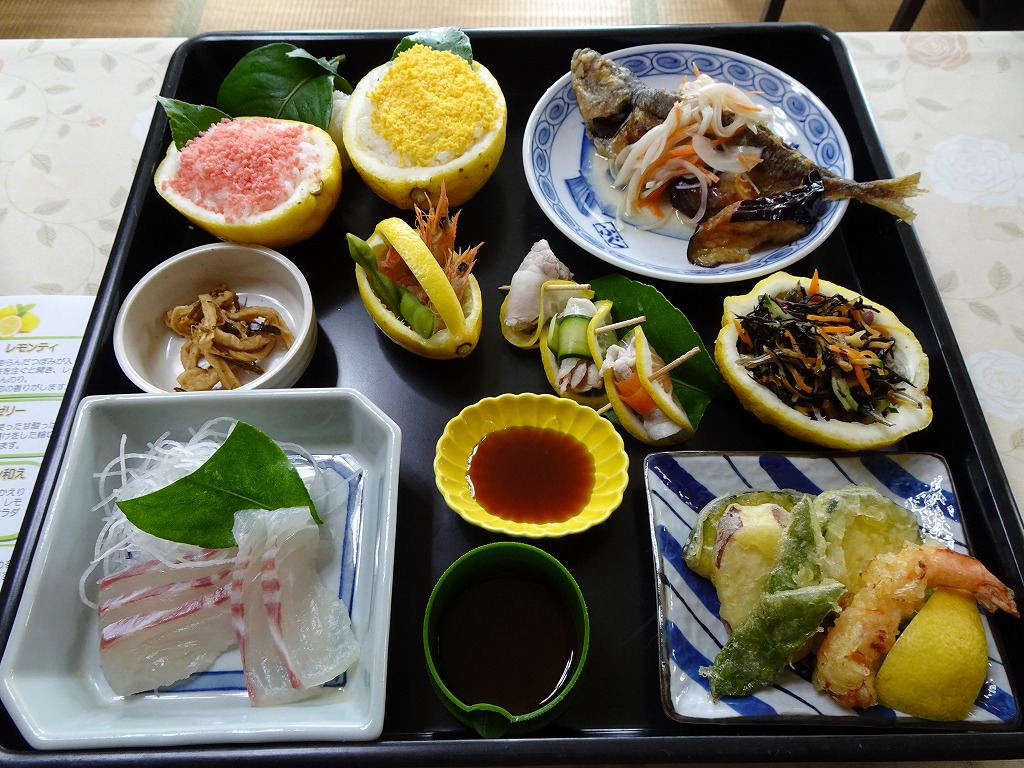 The tour visited the Ehime Prefectural Office, and interviewed Governor Tokihiro Nakamura. The journalists asked a variety of questions: about Ehime’s agricultural policies; measures to deal with the declining birthrate, aging population, and work reform; measures to deal with climate change; the safety of Shikoku Electric Power Company’s Ikata Nuclear Power Plant; the plan for regular flights between Matsuyama and Taipei to begin; and hopes for inbound tourism. 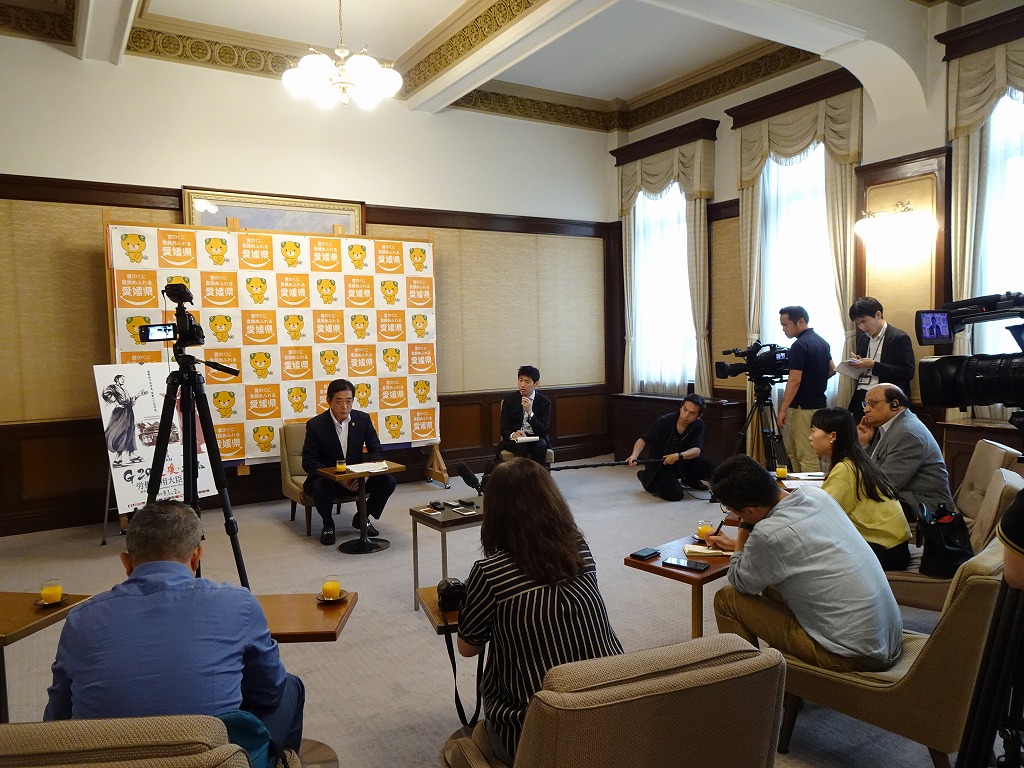 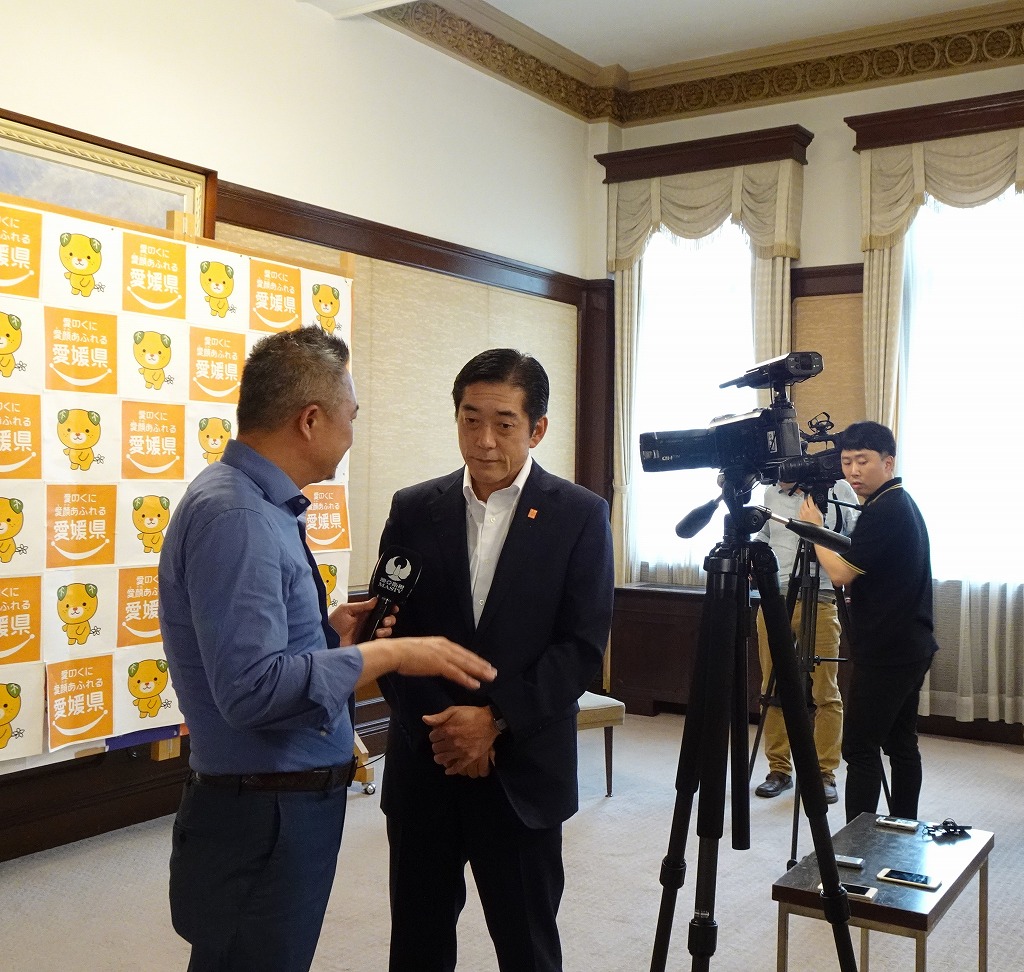 The tour heard an overview of Dogo Onsen, said to be the oldest hot springs in Japan, and about the preservation and maintenance work being carried out on the Honkan [main building] which was built over 125 years ago, while walking along the Sora no Sampomichi, before going to the new Asuka-no-Yu facility. The tour heard about how the concept for the building was Asuka-period construction, and saw collaborations with traditional Ehime crafts and cutting-edge art in the building, such as hanging shades and lights in the rest area covered in Gilding Washi by Ikazaki Shachu, before viewing the special bathing room replicating the Yushinden, a bathing room in the Dogo Onsen Honkan reserved for the Imperial Family. The journalists asked about the locations and number of source springs for Dogo Onsen, the management structure for onsen, and the key goals of the preservation and maintenance work.