Ahead of the G20 Osaka Summit, this press tour was held to tell the world about the appeal of the Kansai region, a pillar of Japan’s economy. The second in a series of three tours, this tour went Osaka, Tokushima, and Wakayama, visiting companies contributing to solving issues on a global scale. The tour covered Kansai companies with a global presence thanks to their ample creativity and unique techniques. A total of nine journalists joined this tour, from China, Germany, Hong Kong, and South Korea, as well as from an English-language newspaper published in Japan.

*This press tour was sponsored by the Kansai Promotion Council for the 2019 G20 Osaka Summit, and planned and operated by Foreign Press Center Japan.

The tour visited the Otsuka Museum of Art (in Naruto, Tokushima), where over one thousand replicas of famous masterpieces made by Otsuka Ohmi Ceramics Co., Ltd. (in Osaka Prefecture) are displayed, and learned about the company’s “ceramic archiving” technology which has opened up new possibilities for archiving and preserving cultural assets. The tour heard about the process for making replicas of cultural assets using ceramics and about the unique characteristics of the Otsuka Museum of Art before touring the museum. The journalists were impressed by the ceramic masterpieces, such as the scale replica of the ceiling of the Sistine Chapel as painted by Michelangelo, and asked about the cost and time required for production, the benefits of making ceramic replicas, and how copyrights are dealt with. 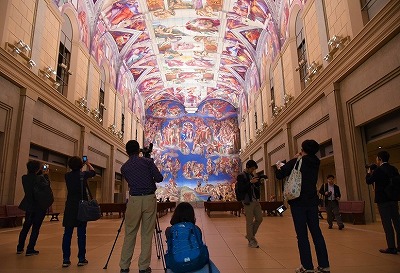 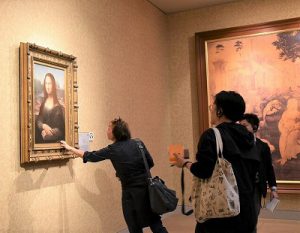 Shikoku Kakoki Co., Ltd. (Tokushima) makes machines to fill containers for food and beverage products. The tour focused on technology the company had developed (and is in the process of developing) to deal with social issues, and heard explanations of an antiseptic filling system enabling a longer shelf-life for nursing care food (which normally deteriorates quickly due to its high caloric content) and a new type of paper container filling system to replace plastic bottles, considering the global trend away from plastic. The journalists asked about current and future plans for overseas expansion, and the effects of the labor shortage. The journalists were surprised that many of the products they often see in stores, such as milk cartons or cup noodles, used technology developed by an SME in Tokushima, and filmed and photographed the constant stream of milk cartons coming out of a filling machine at the factory. 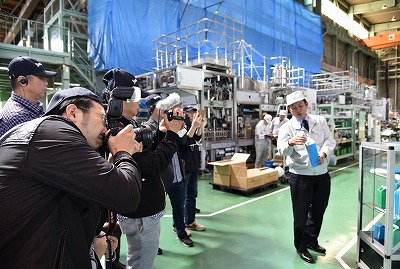 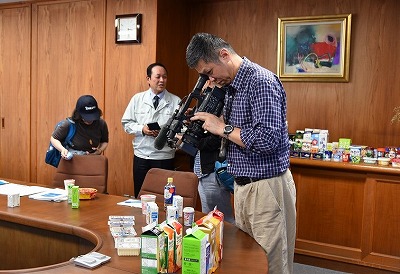 The tour visited Honke Matsuura Brewery in Naruto, first established over 200 years ago, and learned about how the brewery is making sake using LED Dream Yeast developed by the Tokushima Prefectural Industrial Technology Center (by exposing yeast to LEDs). The journalists heard from the owner of Honke Matsuura Brewery and a researcher from the Tokushima Prefectural Industrial Technology Center, and saw where the fermentation tanks were lined up in the brewing chamber before having an opportunity to try some of the sake. The group tasted the difference between sake made using the LED Dream Yeast and standard sake yeast. The journalists asked about what led to LEDs being used on sake yeast, the benefits of using LEDs, the reaction from customers, and the state of overseas expansion. 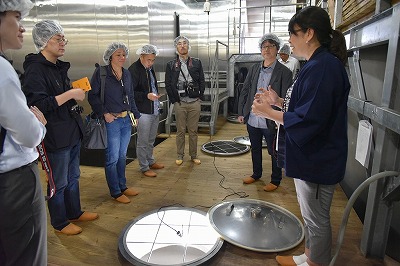 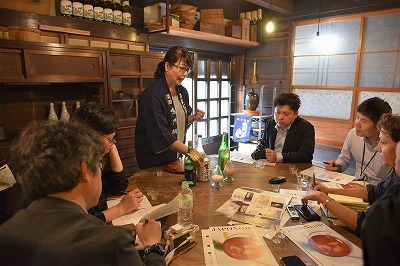 The tour visited Shima Seiki Mfg., Ltd. and learned about their knitwear production combining their Wholegarment knitting machines and 3D design system. The journalists filmed and photographed a demonstration of a Wholegarment knitting machine knitting a three-dimensional piece of knitwear automatically. In an interview with Chairman Masahiro Shima, the journalists asked the price of and what led to the development of the Wholegarment knitting machines that shocked the world, the differences between Shima Seiki’s products and those of their competitors, and even the impact of the US-China trade war. When asked about his feelings on the G20 Osaka Summit, he replied, “With Wholegarment technology, there is no more need for clothing manufacturing to be labor-intensive. With no cut loss or need for seam allowance, no material is wasted. I would like to use the opportunity of the summit to promote this sustainable production to the world.” 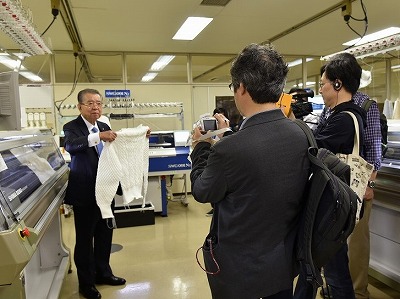 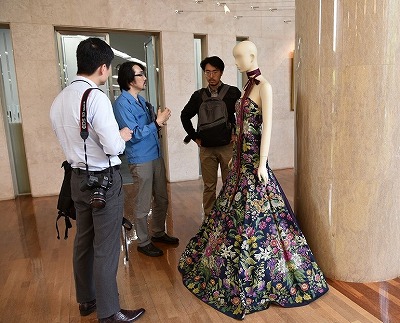 Okada Textile Company Limited
Okada Textile Company Limited is located in Koyaguchi-cho, in the valleys of Wakayama, and from the outside looks like just another house. The journalists were surprised that this small, family-run business with only four employees provided world-famous brands such as Louis Vuitton and Gucci with eco fur (fake fur) and had annual sales of over one hundred million yen. The journalists asked numerous questions about how the eco fur is produced, Okada Textile Company’s insistence on quality, their division of labor with other companies in the area, and current trends. Afterwards, the group had the opportunity to film and photograph one of the 40 processes involved in making eco fur, brushing it with a metallic brush to split the ends of the fur and make it fluffy, in addition to the completed fur being cut. 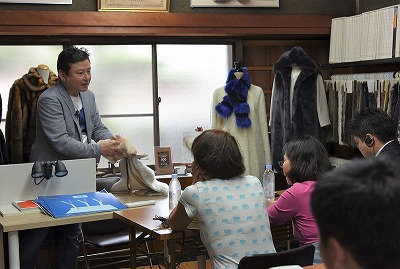 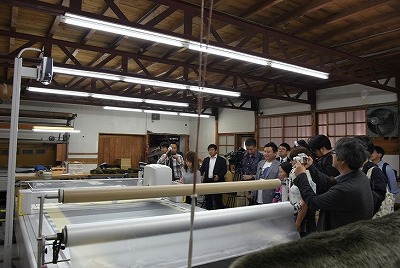 Fuji Oil Holdings Inc.
The tour visited the Fuji Science Innovation Center and learned about how the company has worked on developing food products using soy over the course of more than 60 years, one of the first companies in the world to do so. President Hiroshi Shimizu explained, “It is predicted that the global population will reach 10 billion in 2050. There will be a food shortage. Plant-based food can solve this problem.” Regarding the G20 Osaka Summit, he commented, “We are always communicating our message to the world. With the focus of the world on Osaka, this will be an opportunity.” The journalists asked about whether they used genetically-modified soy, the importance of taste when developing products, and the size of the market in the future. The tour then had the opportunity to try a variety of food made using soy-based products, including soy butter, soy hamburgers, and tiramisu made using soy cream. 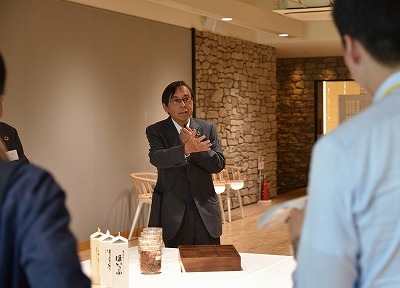 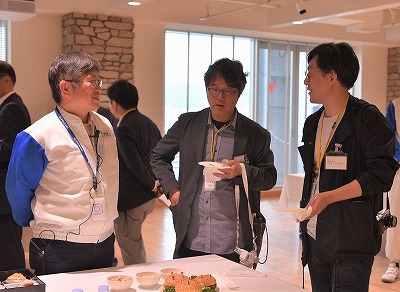 Kansai Airports/Kansai Promotion Council for the 2019 G20 Osaka Summit
The tour visited the head office of Kansai Airports, located within the Kansai International Airport, and learned about their improved disaster-prevention methods based on their experiences in having the airport recover quickly from the damage caused by a typhoon in September 2018. The journalists asked about improvements to dealing with foreign travelers in the case of a disaster, and security measures at the airport for the G20 Osaka Summit. The group also heard from the Kansai Promotion Council for the 2019 G20 Osaka Summit, the sponsor of this tour, about locals’ preparations and expectations for the summit being held the next month. The journalists asked what the biggest challenge was since Osaka was chosen as the venue for the summit, and what was the biggest challenge in the month left before the summit. 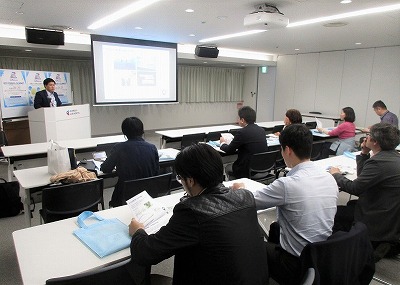 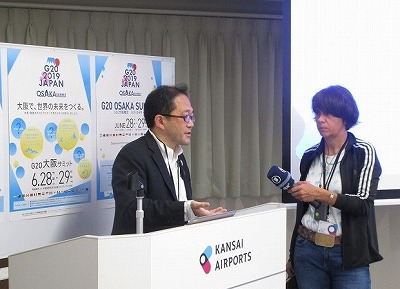