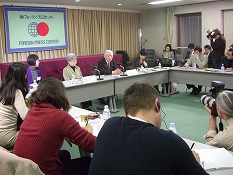 This press tour was held in the run-up to “North Korean Human Rights Violations Enlightenment Week” of December 10-16.

A total of 11 journalists from the U.S., France, South Korea, China, Germany, the U.K., Israel and the EU participated in this tour, and they grasped the realities of the abduction of Japanese nationals by North Korea.
(Photo: Interview of Mr. and Mrs. Yokota at FPCJ conference room)

As an opening session, they had a briefing by Ms. Kyoko Nakayama, special advisor to the Prime Minister, who works on the issue and facilitates communication between the abductees’ families and the government. 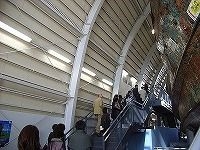 The participants also had briefings by people with differing viewpoints, to deepen their understanding on the issue, such as Mr. Junichi Ihara, Deputy Director-General of the Asian and Oceanian Affairs Bureau, Ministry of Foreign Affairs, as well as experts, Professor Toshimitsu Shigemura, School of International Liberal Studies, Waseda University, and Professor Masao Okonogi, Faculty of Law, Keio University. 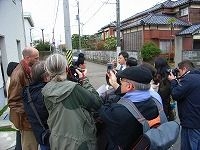 Furthermore, in order to get a direct impression, they visited the abduction site of Ms. Megumi Yokota in Niigata (photo right), guided by the Chief of the Foreign Affairs Division, Security Department of Niigata Prefectural Police Headquarters. 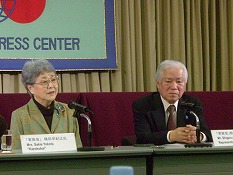 In an interview with Mr. and Mrs. Yokota, the parents of Megumi Yokota, they said, “All the victims of abduction should be returned by any means. Please urge the necessity of solving this issue, to all the people in the world.” The participants, as journalists and as well as human beings, kept this message in their hearts.

After the tour, there appeared articles based on the tour, on JoongAng Ilbo(South Korea/December 10 and 11), The Guardian (U.K./December 14), The Washington Post (U.S./December 16) and an AFP report carried by The Japan Times (December 20).