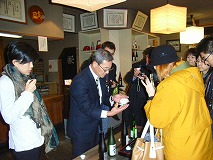 Niigata City is the largest city on the Japan Sea coast with a population of 810,000 and an outstandingly high 60% ratio of food self-sufficiency. Niigata will host the G8 Summit Labor Ministers’ Meeting in May 2008. The tour had an interview with the Mayor, Mr. Shinoda, about the Summit. The tour also covered both old culture and the new trends of the city. The participants showed a special interest in interviews with Furumachi geisha, and Mr. Yamamoto of the Imayo-tsukasa Shuzo Sake Brewery (Photo right) with a great passion for producing genuine sake. The tour was attended by 10 correspondents from China, France, U.S., Israel, Thailand, Spain, and Hong Kong. 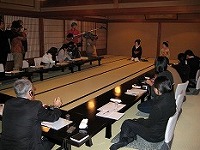