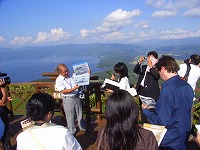 For the Hokkaido Toyako Summit which will be held in July next year, Hokkaido as a local host has started preparations. This press tour featured an interview with the prefectural governor of Hokkaido, Ms. Harumi Takahashi, about their efforts to host the coming major event. The tour visited the main venue of the summit, the Windsor Hotel Toya Resort & Spa. The the tour covered the spectacular scenery around Toyako and the active volcano Usu-zan. On the second day, the tour visited Niseko, an area which has been enjoying a boom in recent years, attracting foreign tourists with its powder snow. The tour had interviews with members of a newly formed movement to publicize “Niseko Brand”, with collaboration between local companies and foreign immigrants.Participating in this tour was 17 journalists from 10 countries/regions, including Bangladesh, China, France, Germany, India, Italy, Korea, Singapore, Taiwan and the UK.