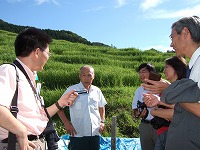 The Noto Peninsula is on the way to recovery from the Quake that occurred on March 25 this year. In the tour, 9 reporters from 6 countries including China, India, Pakistan, UK, France, Israel, enjoyed the beauty of nature in Oku-noto (deeper Noto) and experienced its traditional life and culture, covering the Wajima Asa-ichi, morning market, and the Wajima Great Festival. The tour also featured the Noto people and their life after the Quake, visiting the Wajima-nuri lacquer ware manufacturer who was unexpectedly given a new technique of designing a pattern by the Quake, as well as the local sushi chef who re-opened his sushi bar three months after the Quake.
[Photo: Coverage at Shiroyone Senmaida, terraced rice paddies]