The tour visited Wakabadai Danchi [apartment complex], located in Asahi ward in the northwest of Yokohama, and covered a large-scale apartment complex dealing with population decline and super-aging and its initiatives to make the danchi appealing to young residents. These initiatives are being worked on together by residents, NPOS, the management company, and the local government.
This tour was sponsored by Yokohama City, with planning cooperation by the FPCJ. Twelve journalists from eleven media outlets participated in the tour, from China, Taiwan, South Korea, the UAE, England, France, Denmark and the USA. 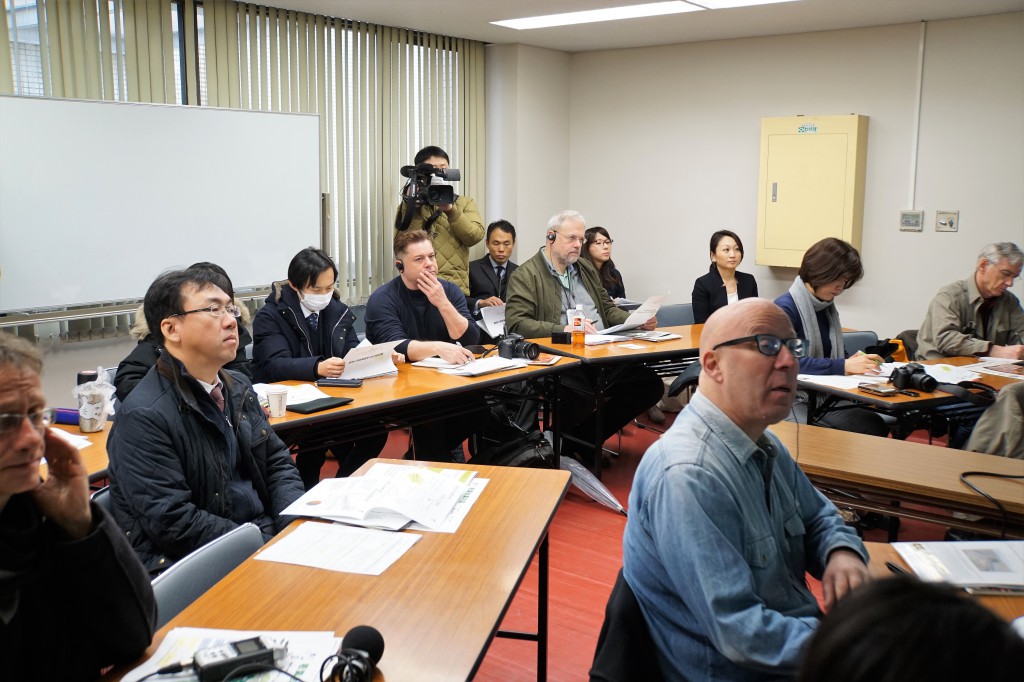 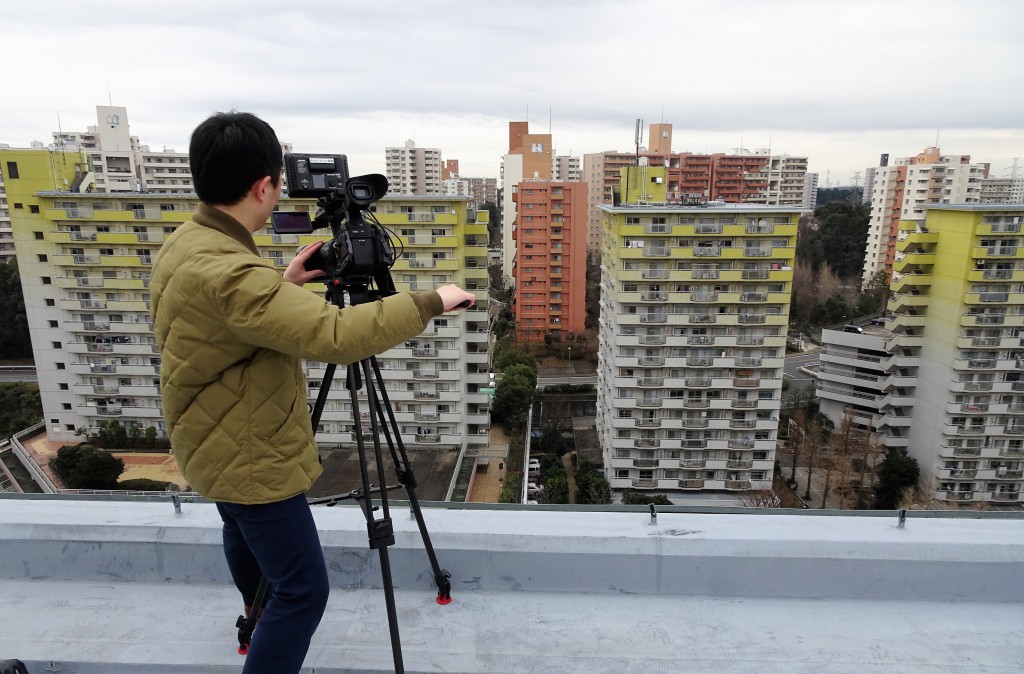 Outline of Wakabadai Danchi
As an introduction, the tour heard from the Housing Reusing Division of Yokohama City Housing and Architecture Bureau, the Welfare and Nursing Center of Asahi Ward Office, the Wakabadai Residents’ Association Alliance and the Kanagawa Prefectural Housing Supply Corporation. They explained the changing population numbers and the situation of aging of the danchi, what it was like when people started moving to Wakabadai, how residents are actively participating in town planning, preparations for the 2025 problem and building an Integrated Community Care System.
The tour then went up to the roof of a thirteen story residential building and filmed/photographed. The journalists were impressed with its spacious area, including a shopping arcade located in the danchi and parks with ample greenery. 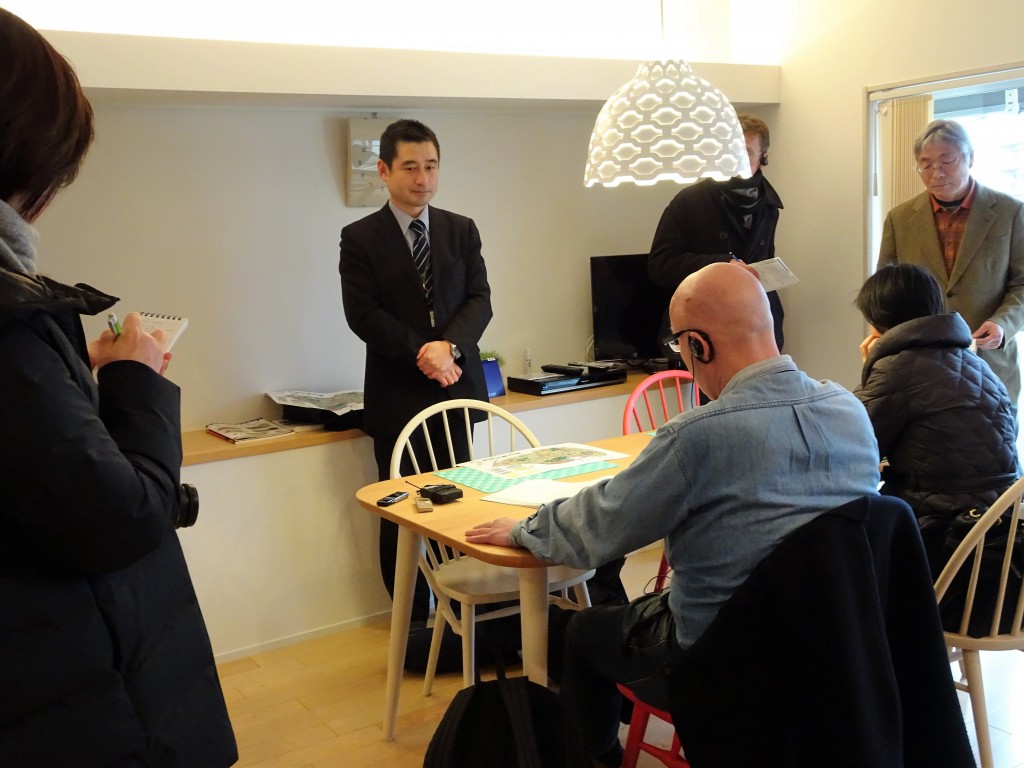 Trial Apartment
The tour visited a trial apartment which allows prospective tenants to experience living in the danchi free of charge and see how livable it is. These rooms were renovated assuming they would be used by young families. Journalists asked questions including whether the renovations affected the earthquake resistance of the room or the building, the difference of space between rental units and units for sale, and the number of trial rooms. 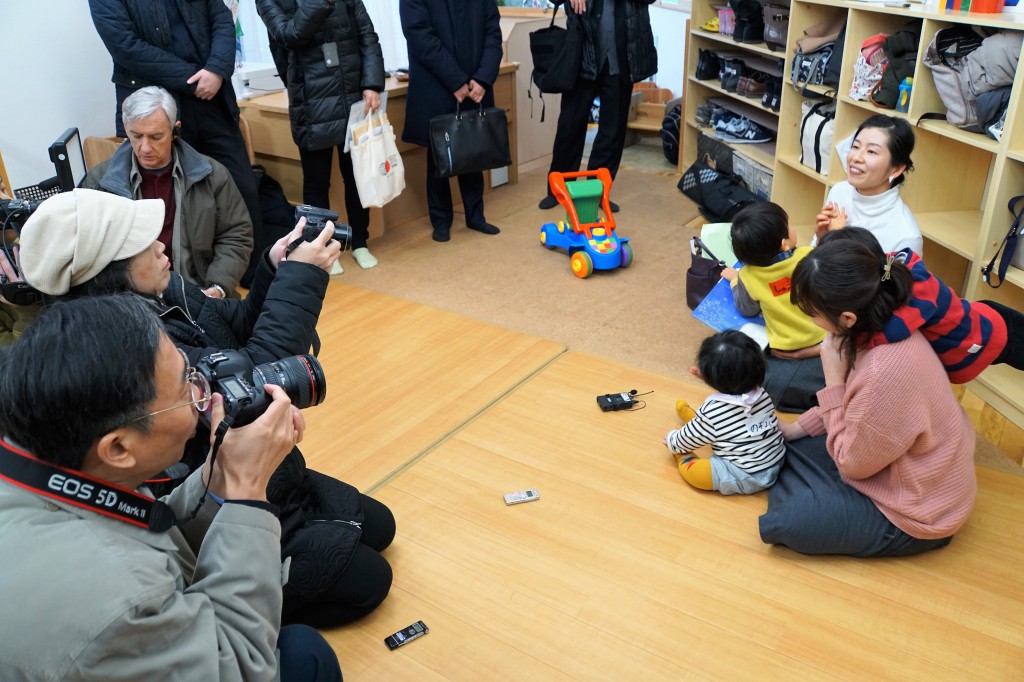 Wakaba Family Plaza Soramame
Wakaba Family Plaza Soramame was opened in an empty storefront in the shopping arcade and is a place where parents with children up to three years old can gather, exchange information, and consult with the parenting advisers. Journalists asked questions to two of the mothers, including the advantages of using Soramame instead of an ordinary nursing school, how challenging it is to work as well as raise children in Japan, and the good points of raising children in the danchi. 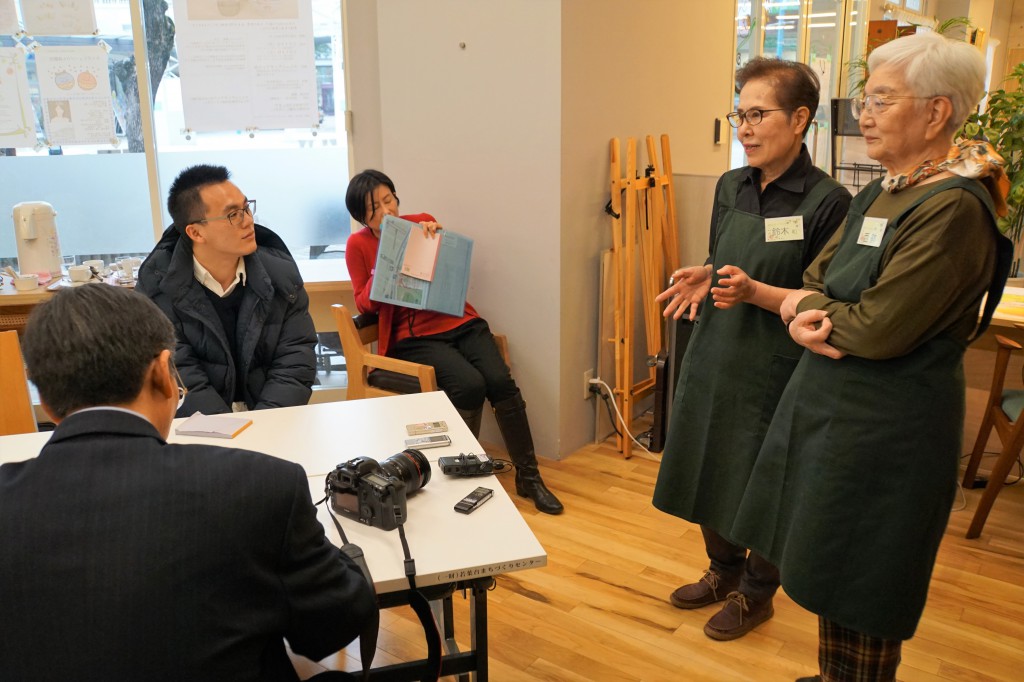 Community Office & Dining Haru
Alongside a space utilized by mothers with young children for events, Community Office & Dining Haru has a restaurant staffed mainly by women living in the danchi that provides home-style meals. After having lunch there, the journalists had an interview with two women who played a central role in launching the restaurant. The journalists asked questions including how they decided their menu every day, what kind of efforts they made in order to bring in elderly customers who usually eat alone at home, and what kind of changes they have seen over the years while living in the danchi. 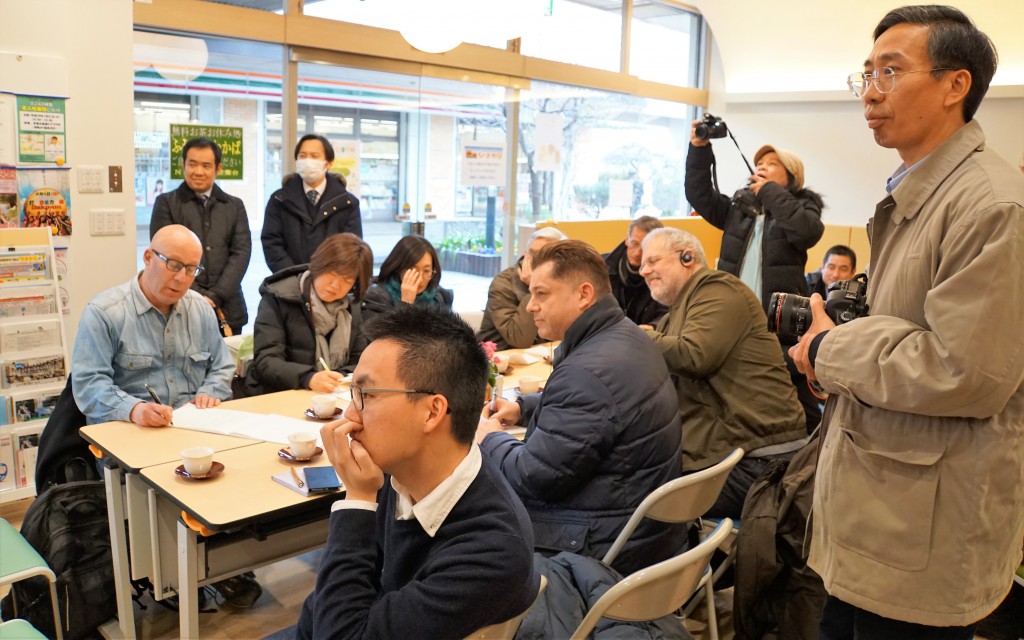 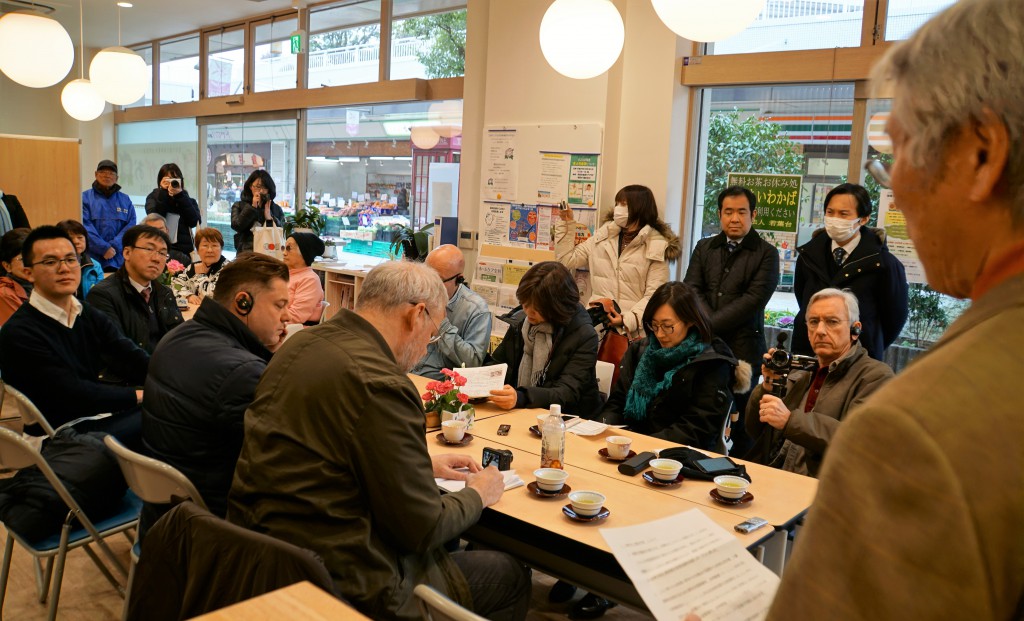 Wakabadai Community Salon Himawari/Home-visit Nursing Station and Support Office Asagao
Himawari was opened by Wakabadai NPO and is a community space including a lifestyle support center for seniors. Seniors can ask for shopping to be done for them, or receive periodic phone calls and home visits to make sure they are alright. Asagao provides residents with 24-hour medical and nursing care services at home. It is operated by Akaeda Hospital, the local danchi hospital. Many journalists were interested in the life of the residents and their views toward the various initiatives taken by the danchi so they asked questions to the ten residents who had gathered to welcome the tour, including how often they visit Himawari and what its good points are. 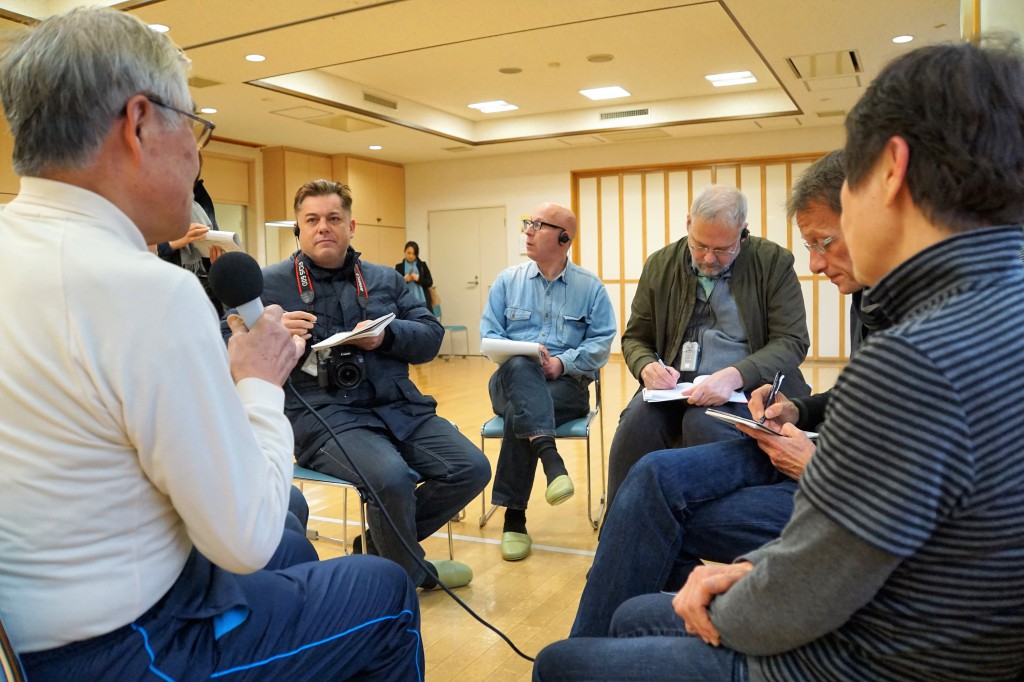 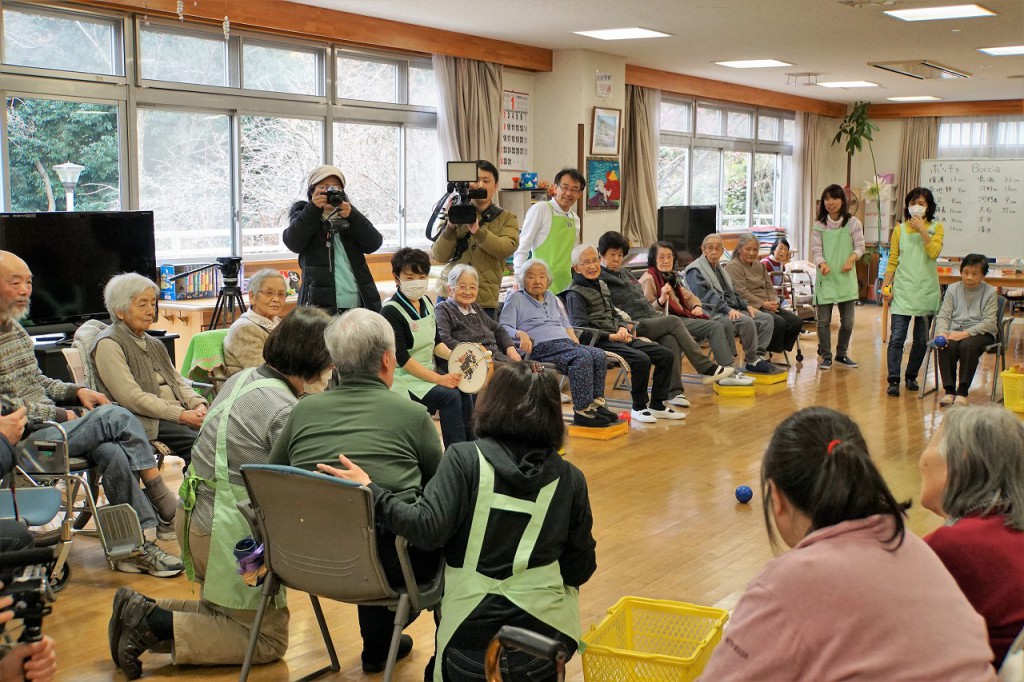 Wakabadai Community Care Plaza
The tour visited Wakabadai Community Care Plaza, a facility that provides consultations about parenting and nursing care, and day care for seniors. Recreational activities are held at the day care, as well as exercise classes to help delay the need for nursing care. Journalists asked questions including how many people are on the waiting list for day care and exercise classes, and how concerned the Care Plaza is about a funding shortage due to the gradual increase in the number of elderly. Since there were few men participating in the class, some journalists interviewed a man one whether he invited his male friends to the class and how they responded to the invitation. 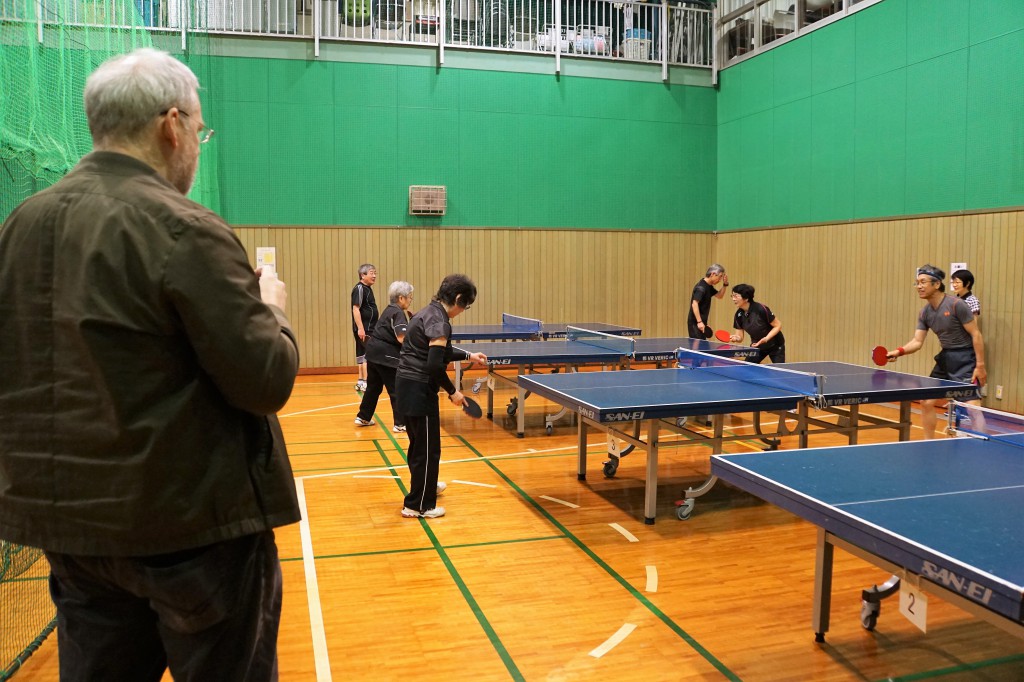 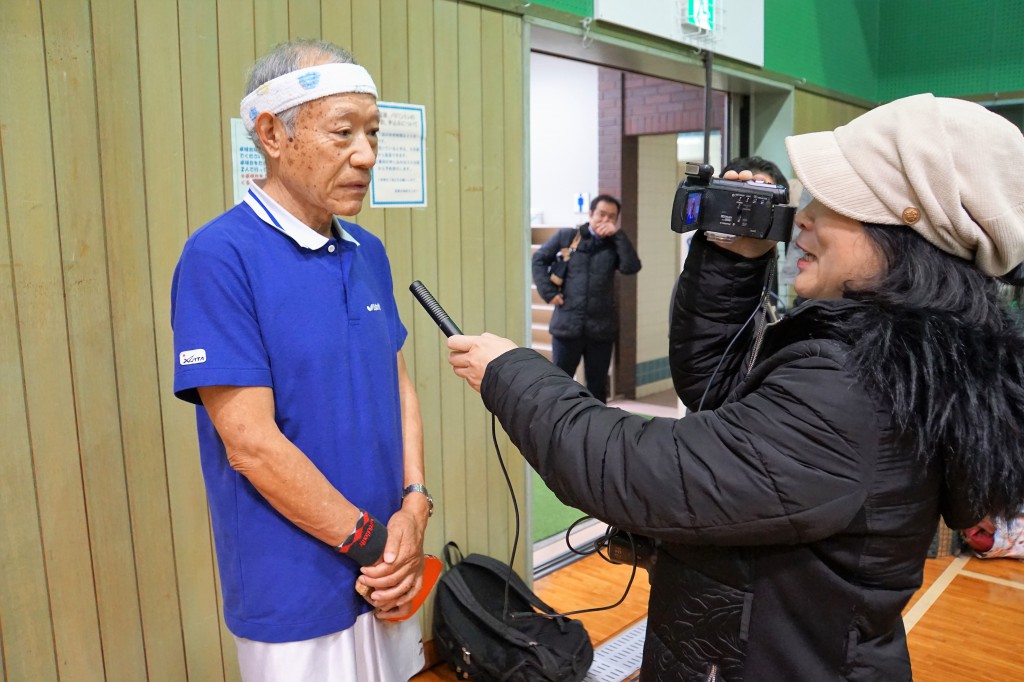 Wakabadai Sports & Culture Club NPO
Wakabadai Sports & Culture Club NPO coordinates activities at various facilities in the danchi, such as tennis courts and the baseball field, to ensure different organizations can use them without issue. It is also involved in creating opportunities for residents to interact, such as a sports festival and marathon. The tour visited a gymnasium and filmed/photographed elderly playing ping-pong. In order to hear from as many residents as possible, journalists asked questions to the players while they were taking a break, including why they chose Wakabadai and how livable it is.

Closing Q&A
At the end of the tour, the journalists held a Q&A session with representatives from Yokohama City, Asahi Ward, Kanagawa Prefectural Housing Supply Corporation and Wakabadai NPO. Journalists asked various questions including when the initiatives to revitalize the danchi began, whether they have a target number for an increase in residents (particularly young residents), whether people living on higher floors are more prone to isolation, how many people eat alone, and how many die alone (kodokushi).