Two weeks before the G7 Ise-Shima Summit, a press tour was held to Ise, Toba, Suzuka, and Tsu in Mie Prefecture. The tour covered Ise Jingu, antiterrorism drills at the summit venue, fishing and unique customs on Toshijima Island, traditional ink making, and an SME entering the global market. This was the third press tour to Mie in advance of the summit sponsored by the Mie Citizens Council for the Ise-Shima Summit and planned and operated by the FPCJ. A total of nine journalists participated from seven countries: China, Qatar, France, Germany, Switzerland, the U.S., and Vietnam.

Guided by Mr. Satoru Otowa of the Jingu Administration Office Public Relations Department, the tour visited the Naiku, where Amaterasu Omikami is worshipped. An explanation was given of the history of Ise Jingu, how prayers are performed, and the Shikinen Sengu ceremony in which shrine buildings are rebuilt every 20 years. As Ise Jingu is a vital element when introducing the Ise-Shima Summit venue, despite the unfortunate rain the journalists took a number of photographs of spots such as the Uji Bridge and the Isuzu River. 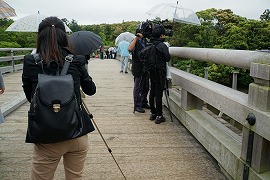 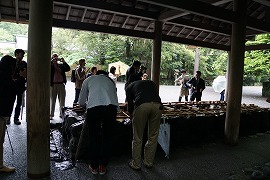 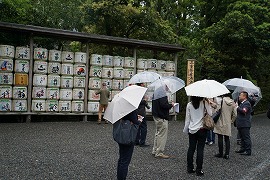 The tour covered an antiterrorism and disaster drill carried out by the Fire and Disaster Management Agency at the Shima Kanko Hotel, the venue for the summit. Based on the scenario of an explosion occurring with the hotel, the drill included firefighting, rescuing injured officials and staff, and dealing with chemical agents. It was a valuable opportunity to inform audiences about preparations for the summit. There was also a Q&A session with Mr. Atsuro Sasaki, commissioner of the FDMA, and others involved in the drill, so one of the journalists commented that it was a very satisfactory experience. 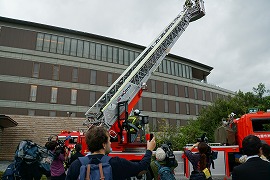 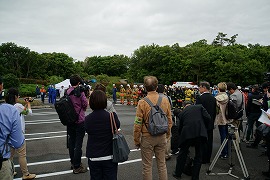 In Toba, located on Toshijima Island in the Ise-Shima area, the local fishing cooperative is making efforts towards sustainable fishing. Mr. Hisateru Nagatomi said that “There used to be an almost frightening amount of seaweed on the seafloor when you dove under,” and explained that with the decrease in seaweed, there has been a decrease in sea life that feeds on it, such as abalone. In order to stop further loss of the seaweed, members of the fishing cooperative have been wrapping young seaweed around natural rocks and tossing them into the sea. The journalists had the opportunity to film some of the steps in the process.

The tour also interviewed a youth who had moved to the main island as an office worker before returning home to work as a fisher. The journalists asked why he returned to the island, differences between life as an office worker and a fisher, and the types of fish caught and fishing methods used. 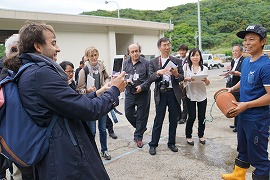 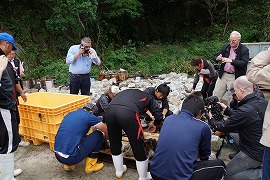 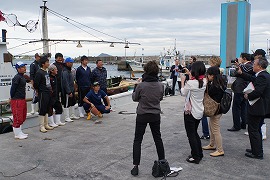 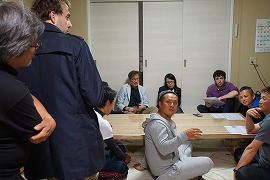 Toshijima is the only place in Japan where the neyako custom still exists. To cover this custom, the tour visited the home of Mr. Takaaki Hamaguchi and his wife, who act as “neya-oya,” essentially a second set of parents, to some local boys. The journalists photographed the room where the neyako boys sleep, and interviewed them along with Mr. Hamaguchi and his wife. When asked about the benefits of spending time with a household other than their own family as neyako for 10 years from the age of 15, Mr. Yuya Yamashita (a neyako) replied “People aren’t connected with each other in the big cities in Japan.

But with the neyako system, you gain more people who feel like brothers or parents, and have more connections in the community.” The journalists asked a number of other questions too, including about the origins of the neyako system, what it entails, and the relationship between neya-oya and neyako.

The tour received an explanation of the fishing village culture of Toshijima from ecological tour guide Ms. Kiku Ezaki, while photographing the island scenery along the road. They also happened across and interviewed a former ama diver in her 90s, as well as another currently active ama diver.

Mr. Kohei Nakamura, director of the local Toba Isobe Japan Fisheries Cooperative, gave the journalists an overview of sustainable fishing initiatives in Toshijima. He described local efforts to add value to the fish and develop a Toshijima brand with thorough safety and quality controls, restrictions on the size of fish that are caught, “no fishing days” that are held periodically, and promoting local consumption of locally caught fish. The journalists asked many questions about these topics.

In addition to photographing fish at the harbor and auctions at the market, the journalists interviewed Mr. Nakamura and Ms. Chiharu Hashimoto, manager of a ryokan inn and a certified fish broker. 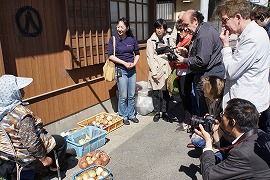 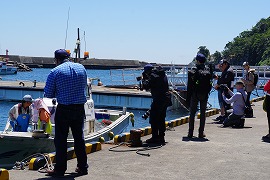 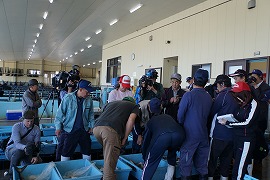 The tour visited the only remaining ink maker in Suzuka City, Sinseido, and heard about the history of Suzukazumi ink and the process of making ink from Mr. Tadashi Ito, the third-generation owner. Sinseido has been making ink for over 100 years, and according to Mr. Ito “We are going against the times, as people write with ink less and less.” Together with his son Harunobu, they have developed new products to match this modern age, and they introduced these products to the journalists. In addition to photographing the ink-making process by the father and son and a performance by a calligrapher, the journalists interviewed them. 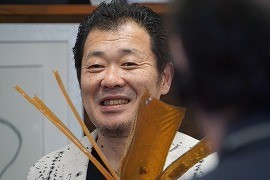 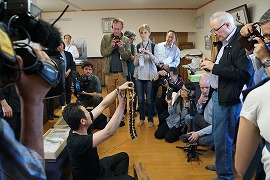 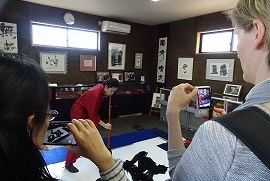 The tour visited Hikari Kikai Seisakusho, which uses unique techniques to make industrial machinery and cutting tools used in processing parts for automobiles, smartphones, and other purposes. While visiting the factory floor, the journalists were told about industrial machines made incorporating female perspectives on ease of use, including that of an Indian woman in the sales department. The president, Ms. Keiko Nishioka, described the company’s philosophy and history, and then responded to questions from journalists about Abenomics, the Japanese economy, and what is special about the company. 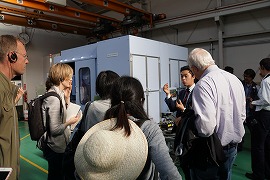 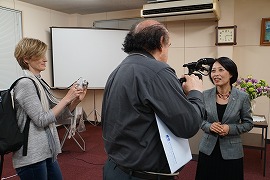